FRIDAY 6.10
Yardsss, Wrtch
Since Albatross Recordings & Ephemera's recent move to the corner of 1300 South and 900 East, the concern has really come into its own. In contrast to Diabolical's focus on punk/garage music, Albatross favors more experimental music, from ambient to outsider DJs to obscure '70s-'80s movie soundtracks. So it just seems natural that Albatross hosts a visit from two bands on (mostly) Italian metal label SG (Self Group) Records. Portland combo Yardsss—Krist Krueger and compadres—are more ephemeral than anything resembling metal, conducting (according to their bio) not shows but "performance case studies," with drone-y orchestrations that reference literary figures like Kurt Vonnegut, in whose work they found the title of their newest album, Granfalloons. Seattle's Wrtch, led by Ambrosia Bartosekulva, also uses piano to evoke impressionistic images. It'll be very fitting to witness both musical enterprises in a space devoted to vinyl, once seen as an ephemeral medium. (Brian Staker) Albatross Recordings & Ephemera, 1305 S. 900 East, 7 p.m., $5 donation suggested, Twitter.com/AlbatrossRecSLC 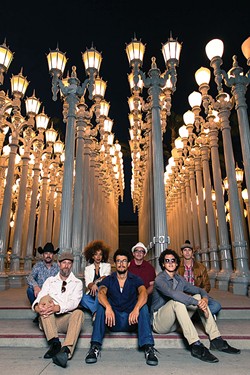 Orgone
Los Angeles ensemble Orgone has more than a decade's worth of playing together, first as a tightly knit band backing hip-hop acts such as the Pharcyde and Tone-Loc during the '90s, then later as their own unit fronted first by charismatic frontwoman Fanny Franklin and, now, Adryon de León. The powerful chemistry of band and singer is apparent in Orgone's deep roster of funk, soul and Afro-beat originals and covers. Orgone still kills it as a live instrumental band, helped by crisp horns, Ethan Philips' generous bass grooves and mesmerizing deep funk licks from Sergio Rios' guitar. The band's latest single, "Do What You Came to Do," melds classic Memphis soul with a hint of Reggae for a supremely listenable—and danceable—brew. And if those aren't your bag, just wait a bit for something like "Sweet Feet," a Chaka Khan-inspired '80s dancefloor tune that's fresh while remaining a spot-on tribute to its influences. (Kimball Bennion) O.P. Rockwell, 628 Main, Park City, 9:30 p.m. (doors), $15, OPRockwell.com

ALO, Talia Keys
The first ALO song I ever heard was "Barbeque." I was playing disc golf, alone, and decided to take a break. In the cool shade, escaping a vicious sun, I let Zach Gill's electric piano notes and lyrics cascade over me like cool water. He sang of long, winding roads with twists, turns, colorful subplots and sunburns, and fake-out endings, saying to set your dreams ablaze—accept that they may never come true. Instead, see them as dangling possibilities and, if one happens to come true? Well, bonus. Dig into the California jam band's eight-album discography, if you haven't already. Happy birthday to opener Talia Keys, a fine songsmith in her own right. (Randy Harward) Sky, 149 Pierpont Ave., 9:30 p.m., $20 in advance, $25 day of show, SkySLC.com

FRIDAY-SATURDAY 6.10-11
Bonanza Campout: Big Gigantic, Cold War Kids, Joywave
Given the fact that Utah has a wide variety of outdoor concert venues (see p. 66), it was only a matter of time before a two-day campout/concert festival emerged. This weekend, the inaugural Bonanza Campout will descend upon Rivers Edge, a resort at the base of Jordanelle Dam in Heber City. Headliners include hip-hop/jazz fusion group Big Gigantic and indie-rock band Cold War Kids, who will be leading a lineup that includes Joywave, JR JR, Emancipator and Savoy—not to mention locals Quiet Oaks, Joel Pack & the Pops, Scenic Byway and Daisy & the Moonshines. In addition to two days of live music from 32 bands spanning a variety of genres, attendees can treat themselves to samples of local beer and food, along with other outdoorsy activities. As an all-ages show where camping overnight is encouraged, it will be a great weekend getaway for all nature-loving music fans (Alex Springer) Rivers Edge @ Deer Park, 7000 Old Highway 40, Heber City, 9 a.m.-3 p.m., $75 for weekend pass, $40 for single-day pass, BonanzaCampout.com

SATURDAY 6.11
Black Mountain, Malcom Jack
About 10 years ago, it seemed like Black was the new Jesus, as far as new band names were concerned—The Black Keys, Black Lips, Black Angels, etc. Of course, anyone can jump on a bandwagon, but how many can carry a tune? Perhaps the most direct musical descendant of the heavy psychedelic proto-Black band, Black Sabbath, is Vancouver's Black Mountain. They add some atmospheric vocals and synth, but, at heart, it's all about the Mountain as a rock symbol for a dark repository of arcane secrets. Black Mountain's latest album, IV (Jagjaguwar, 2016) hearkens back in more than just its title to that other hard rock band that used to get its "Misty Mountain Hop" on from time to time. (BS) The Urban Lounge, 241 S. 500 East, 8 p.m., $15, TheUrbanLoungeSLC.com

SATURDAY-SUNDAY 6.11-12
Crucialfest 6 Warm-Up Shows, Pts. 1 and 2
It's best to stretch before exercising, and a similar maxim applies to the four-day, three-venue, 50-band shindig called Crucialfest. So rehearse your mosh moves and prime your eardrums at these pre-event events. You've already got the deets for Crucial Warm-Up Pt. 1 (see p. 81), so here's the poop on Pt. 2: Since 2000, North Carolina's Valient Thorr has made the loudest, fastest and face-meltingest rock music they can, leading a devoted following of "Thorriors." They're joined by New Jersey thrashers Hammer Fight, whose relentless Profound and Profane (Napalm) was released in March, as well as locals Accidente and Barlow. (RH, KB) Metro Bar, 615 W. 100 South, 8 p.m., $10, JRCSLC.com

SUNDAY 6.12
Stephen "Ragga" Marley
With his origins firmly rooted within the foundation of modern reggae music, Stephen "Ragga" Marley is continuing his Grammy-winning solo career with a summer tour. After the success of Marley's 2011 release Revelation Part I: The Root of Life (Universal/Tuff Gong), he's finalizing production on Revelation Part II: The Fruit of Life, which is due July 22. Based on the single "Scars on My Feet," which features Atlanta-based rapper Waka Flocka, the album will further explore Marley's ability to blend elements of reggae, hip-hop and pop, while featuring an impressive roster of collaborators such as Rakim and DJ Khaled. Summer evenings were made to enjoy live reggae music—spend this one with a member of reggae royalty. (AS) The Depot, 400 W. South Temple, 8 p.m., $22 in advance, $27 day of show, DepotSLC.com

WEDNESDAY 6.15
Joe Purdy, Garrison Starr
Joe Purdy's threadbare folk songs are made for close listening. The Arkansas-raised singer/songwriter makes music reminiscent of Amos Lee or Ray LaMontagne, but he adds a hint of twang in his voice—although not enough to be distracting—and he's often at his best with nothing more than a guitar, singing barely above a whisper. Even though it's been almost two years since Purdy released his latest record, Eagle Rock Fire (MC), the prolific songwriter has more than enough material to work with. Purdy is still best known for his 2004 breakout Julie Blue, which included the songs "I Love the Rain the Most," and "Wash Away," but he has lately made some enjoyable forays into country and Americana that, as longtime followers of his work know, demonstrate his varied folk palate and skill for communicating the subtle tragedies of love and life. Acclaimed singer-songwriter Garrison Starr opens. (KB) The State Room, 638 S. State, 8 p.m., $25, TheStateRoomSLC.com