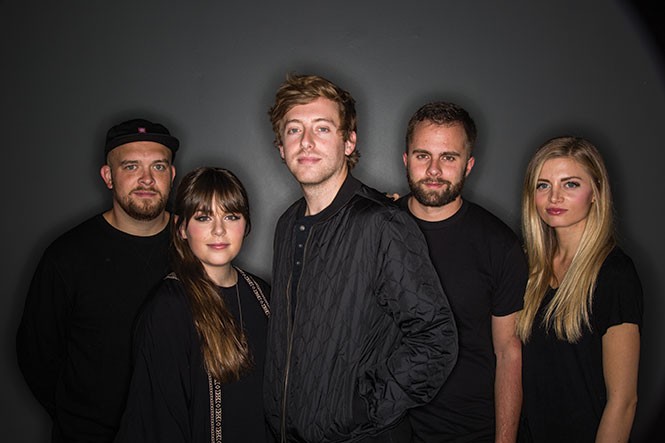 FRIDAY 3.11
City Weekly Best of Utah Music 2016 Winners' Show: Sneeky Long, Thunderfist, Folk Hogan, Candy's River House, The Aces, The National Parks
City Weekly readers, we're gonna borrow from Kiss and hope Gene Simmons doesn't sue our asses: You wanted the best, and you got the best. The hottest bands in the Utah music scene. Yeah, that's about as far as that joke can go. But know this: Your votes shaped this entire bill, which is stacked with some of the state's best musical acts. Opening the show, and providing a nice musical through-line to the entire event, is Best DJ-Open Format winner, Sneeky Long, before Best Live Act winners Thunderfist prove their mettle. They'll be followed by Folk Hogan (Best Folk Artist), Candy's River House (Best Rock Artist, Album of the Year), The Aces (Best Pop Artist) and, finally, Best of Utah Music 2016's Band of the Year, The National Parks. And apologies to anyone who feels misled about the petting zoo we mentioned parenthetically in the article announcing the nominees. That, too, was a joke, but we realize some of you really love animals and this will be a letdown. What is that consolation on Reddit or 9gag or one of those sites? Oh, yeah: Here's a potato. (RH) Sky, 149 Pierpont Ave., 9 p.m., $10 (plus $1 fee), SkySLC.com

Plague Vendor, Bitchin'
Plague Vendor is a punk band that captures the spirit of early So-Cal bands, serving as a reminder that listeners don't have to let genres be confining. Punk rock was always a DIY genre, so why not allow that to include some experimentation, stylistically and in what the genre encompasses? The band is reminiscent of the Minutemen, not so much sonically; these guys tend toward surf/garage-y guitar sounds, while the trio from San Pedro added some jazz fusion moves to their palette. It's the freewheeling sprawl of their sound—anger isn't a restriction, but allows singer Brandon Blaine to expand on what's eating him on their 2014 Epitaph release, Free to Eat. It's no surprise that they hail from Whittier, Calif., the town that spawned Richard M. Nixon. And there's a sense of joy and freedom in their rebellion. Opening is local band Bitchin', the newest unit with singer Ryan Jensen, formerly of Vile Blue Shades and the Corleones. (BS) Kilby Court, 741 S. 330 West, 7 p.m., $15, KilbyCourt.com

Mickey Avalon
Los-Angeles based rapper Mickey Avalon grew up surrounded by drug-abuse, so he went on to form his own habits, and eventually resorted to the world's oldest profession. After repeatedly cleaning up and relapsing, Avalon met former MTV VJ Simon "Dirt Nasty" Rex, and they formed Dyslexic Speedracers, who appeared on the soundtrack for The Hangover and opened for the Red Hot Chili Peppers. In 2006, Avalon mined his life experiences on his self-titled debut (Interscope/Shoot to Kill/Myspace) and followed-up with 2012's Loaded (Suburban Noize). His very non-rapper stage presence (performing in skinny jeans and gothic-reminiscent make-up), unusual vocal style (imagine Marilyn Manson meets Soft Cell meets Kid Rock) and debauched lyrics continue to draw fans. With his more recent single, "Hollywood"—a meditation on the excesses of street life, comparing Hollywood to the biblical Babylon—Avalon seems primed for his return to the center-stage. (ZS) The Cabin, 825 S. Main (Park City), 10 p.m., $20, TheCabinParkCity.com

Green Velvet, Nate Lowpass, Typefunk b2b Devereaux
The punk- and funk-infused electronica/house music of Green Velvet (Curtis Jones) has kept fans moving since early '91. Variously collaborating with the likes of Patrick Topping, Technasia and Weiss, Green Velvet teamed with Detroit-based techno musician Carl Craig last year for the remix/collab album, So What (Relief). In support of Green Velvet is Nate Lowpass, runner-up for Best Electronic Artist in City Weekly's Best of Utah Music 2016, who has made a name for himself with a taste for dubstep and a uniquely captivating flare for trance. Typefunk goes back-to-back with Devereaux to set things off. (Zac Smith) The Depot, 400 W. South Temple, 9:30 p.m., $16 in advance, $21 day of show, DepotSLC.com

SATURDAY 3.12
Ty Segall and the Muggers
Last year, Ty Segall visited Salt Lake City with his heavy psychedelic project, Fuzz, a power trio in which he drums and shares vocal duties. Minds were blown. The 28-year old's solo career has been more of an exploration of the singer-songwriter persona in the garage-punk/psych mode, culminating in his newest release, Emotional Mugger (Drag City). A concept album with such a potentially sinister subtext had better be matched by music that can carry the weight, and Segall delivers. The sound is like candy dredged through a fry cooker: sweet, yet sleazy and greasy. Whether musical prank, sheer mindfuck or marketing gimmick, the release is accompanied by the Emotional Mugger hotline, 1-800-281-2968, where the performer proclaims in his creepiest voice that he is "itching to know how I can fill the hole in your ego." If nothing else, Segall's new music fills a gap in your listening library for raw guitar music that is capable of pushing all your buttons. Max Pain & the Groovies and JAWWZZ!! open. (BS) The Urban Lounge, 241 S. 500 East, 8 p.m., $15 in advance, $17 day of show, TheUrbanLoungeSLC.com

TUESDAY 3.15
The Prettiots, Misspelt, Sally Yoo
The Prettiots (Kay Kasparhauser and Lulu Prat—yes, the former has confessed to a lyrical obsession with "Werner Herzog and sex") have performed together barely over a year, but their gig last year at South by Southwest netted them a contract with legendary English label Rough Trade, who released their debut, Fun's Cool last month. Songs like "Boys (That I Dated In High School)" and "Kiss Me Kinski" are almost totally irony-free pop hum-alongs, which is refreshing, but then there's not much bitterness in Kasparhauser's four-string frenzies. Their odes to innocence might be the smartest music on the block, and the undercurrent of angst somehow wins you over with its honesty. (Brian Staker) Kilby Court, 741 S. 330 West, 7 p.m., $8, KilbyCourt.com