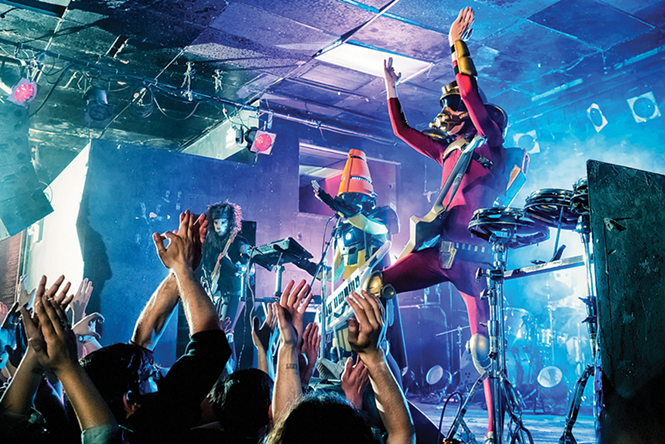 THURSDAY 3/14
TWRP, Planet Booty
Canadian electro-funk band Tupper Ware Remix Party (TWRP for short) has attained a measure of cult-like fame thanks to its frequent collaborations with Ninja Sex Party. Last year, the two acts put out a joint full-length, Cool Patrol, bringing their salacious lyrics and skronked-out mix of synth-pop and old-school rock to the Union Event Center here in Salt Lake City. TWRP returns nine months later to much more intimate environs at In the Venue. But Doctor Sung, Havve Hogan, Lord Phobos and Commander Meouch will no doubt still be wearing their omnipresent costumes—parking cones, superhero tights and lion masks included—and delivering their high-energy brand of intergalactic funk. The support act, Oakland's Planet Booty, is equally upbeat, splashing its gritty garage R&B with a more futuristic bounce (see last month's music video for hot single "Junk in the Trunk" for danceable proof). As Planet Booty said on Facebook recently, "Celebrating your sexiness with Planet Booty may result in a religious experience no matter where or who you are." Plan accordingly for this sweaty dance party. (Nick McGregor) In the Venue, 219 S. 600 West, 7 p.m., $16 presale; $18 day of show, all ages, sartainandsaunders.com

SUNDAY 3/17
Cypress Hill, Hollywood Undead
Known for such classic joints as "Insane in the Brain," "Tequila Sunrise" and "Dr. Greenthumb," Southern California's Cypress Hill exemplified the weed-friendly gangsta rap emanating from the West Coast in the 1990s like no other hip-hop crew—and reached an extremely wide audience, too. They became the first Latino American hip-hop group to have a platinum (then multi-platinum) record with 1993's Black Sunday, leading to high-profile gigs at Lollapalooza in Chicago. They cemented their place in pop culture history with a guest spot on the 1996 "Homerpalooza" episode of The Simpsons. B-Real's exaggerated nasal vocals—one of the group's sonic hallmarks—would encourage a young Marshall Mathers to develop his own distinctively high-pitched style as Eminem. But Cypress Hill is not strictly a legacy act at this point; casual fans might be surprised that the group is still active and dropped its first album in eight years, Elephants on Acid, in 2018. Unlike the group's last studio effort—2010's Rise Up, which was produced by a who's who of guest beatmakers—Elephants is entirely composed by founding member DJ Muggs, who's built his own thriving career in the years when Cypress Hill has faded from the spotlight. By no coincidence, the record delivers menacing, hard-rolling bangers ("Falling Down" and "Locos") in equal measure with goofy stoner stuff ("Reefer Man") and dark, carnival-esque romps ("Crazy"), a potent blend that has defined the group from the beginning. After 30 years of rolling it up, lighting it and smoking it, Cypress Hill is riding as high as ever. They visit SLC with Hollywood Undead, a mask-wearing rap-rock band that might be even goofier, somehow. (Howard Hardee) The Depot, 13 N. 400 West, 6:30 p.m. $37.50 presale; $40 day of show, 21+, depotslc.com

MONDAY 3/18
The Happy Fits, Deal Casino, Billy Moon, The Solarists
The Happy Fits and Deal Casino share a common affection for retro references. The former started with its two founders—high school fencing champ Ross Monteith and orchestra enthusiast Calvin Langman—bonding over an enthusiasm for indie rock and subsequently bringing gamer pal Luke Davis into the fold once they turned their attention to writing and recording. The trio's giddy, off-kilter melodies form the basis of Concentrate, last year's dazzling debut, which highlighted their unique choice of instruments (electric cello, anyone?) and their exuberant songwriting skills. Yet where The Happy Fits tend to create a sound that's generally upbeat and effusive, Deal Casino emphasizes darker designs, drawing from influences such as Led Zeppelin, Pink Floyd and The Cure for their moody motifs. The heavy buzz of the New Jersey band's sonic sweep and psychedelic fury informs each of their two albums, and is further enhanced in their dynamic and dramatic live performances. Deal Casino also maintains a communal bond, given that three of its four members have been making music together since elementary school; these days, all four of them live, write and rehearse together in the same house. Consider any concert that features both bands akin to a sonic flashback of sorts, where youth, invention and rock 'n' roll revelry are embraced in a dazzling mix of tone, texture and tempo. We can dig. (Lee Zimmerman) Kilby Court, 741 S. Kilby Court, 7 p.m., $13, all ages, kilbycourt.com

TUESDAY 3/19
Better Oblivion Community Center, Christian Lee Hutson, Sloppy Jane
Take one Phoebe Bridgers (the gentle perfectionist who made the knockout Stranger in the Alps and member of anthemic three-person indie-rock powerhouse Boygenius, which also includes Julien Baker and Lucy Dacus) and one Conor Oberst (he of Bright Eyes fame and longtime indie-folk standard bearer) and you get Better Oblivion Community Center. The band might just be a big joke; a news release for the duo seems at first glance to be a transcribed interview, until you realize it's a gentle mockery of the interviewer of dubious reality—Chester Middlesworth, Ph.D.—in which ol' Chester says approximately 10 times as many words as the duo. He also describes the origins of the band's name—a bungled geotag at L.A.'s Forest Lawn Cemetery that he says translates to Better Oblivion Community Center (Oberst and Bridgers promptly shoot him down, so ... origins still unknown). The band's social media description just lists a mysterious hotline number; when you call, a strangely calm voice announces the opening of Better Oblivion in a Welcome to Night Vale-esque way. Whatever it is, the mythic community center is probably a place you go to die, but you'll die gently, lulled into a forever sleep by the perfect frisson of Oberst and Bridgers' voices. Bridgers grew up listening to Bright Eyes albums, but more than holds her own on the songs, with the pair frequently singing harmonies in tandem. This show has, unsurprisingly, been sold out for weeks. Ah, well. Given Bridgers' pace of collaboration and Oberst's status as an indie rock champion, we can at least hope to see them again soon in SLC. (Naomi Clegg) Metro Music Hall, 615 W. 100 South, 7 p.m., sold out as of press time, 21+, metromusichall.com

Hypocrisy, Fleshgod Apocalypse, Aenimus, WrathSpawn
Drummers are truly the anchor of every band—the glue that keeps an otherwise dysfunctional family at bay. However, growing up, everyone in my high school wanted to be a vocalist or lead guitarist, because they got the most attention on stage. That's why finding a metal drummer with explosive blast beats and powerful chops is like finding a diamond in the rough. Luckily, Italy has graced the extreme music community with Francesco Paoli, the death metal anchor of Fleshgod Apocalypse. Although Paoli eventually put the sticks down to take over vocals for the band, his blast beats from Fleshgod's 2011 album Agony will live in metal infamy. For a decade now, the band has extended its refined taste to extreme music, incorporating piano and opera-like vocals, showing the world that metal can be both classy and terrifying. This year, the three horsemen go even further with their upcoming album, making Metallica's S&M look like a starter kit and forever cementing Italy's death metal talent in not only the genre, but classical music annals as well. Since the news broke that Paoli will be behind drums again for the band's as-yet-unnamed studio album, a live show in Salt Lake City is bound to be very interesting. "Being back as the frontman also means this is my last chance to record drums on a Fleshgod Apocalypse record," the drummer explained to fans last fall in a Facebook interview. "I really think this album will be a true landmark." Fleshgod Apocalypse co-headlines with Swedish icons Hypocrisy to blast-beat fans into the future of metal. (Rachelle Fernandez) Urban Lounge, 241 S. 500 East, 7 p.m., $22 presale; $25 day of show, 21+, theurbanloungeslc.com 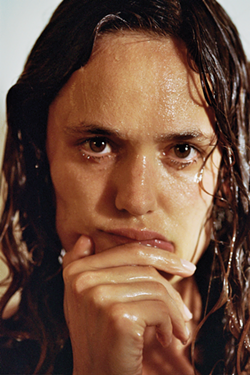 WEDNESDAY 3/20
Wet, Kilo Kish, Helena Deland
Kelly Zutrau's vocals sound like the name of her band: Wet. Her voice is slippery and frustratingly liquid, gliding through breezy broken chords and feeling all the time like it's about to slip through your fingers, ungrounded until she dips into her lower register and adds a hit of gravity. The effect is—for the most part—light, unconcerned, distant from the subjects she sings about: lovers she's over, boyfriends she's ready to break up with. Zutrau (pictured) is the star here, to be clear; her vocals rise above the precise arrangements of fellow band member Joe Valle. The duo hail from Brooklyn but feel more like they should be from L.A., or at least somewhere weed is legal. They've released two studio albums and a large handful of singles—most recently, 2018's Still Run, which was produced by Valle and a team of star producers, including John Hill (Portugal. The Man, Florence & The Machine), Rostam (Haim, Solange) and Andrew Sarlo (Big Thief). In 2015, The Fader called Wet the most promising group in music, and that determination shows on Still Run, which feels resonant but unforced, slickly produced but not so polished a little grit can't slip through. Opening for Zutrau and Valle are experimental hip-hop/art-pop artist Kilo Kish and enchanting Montreal singer-songwriter Helena Deland, both of whom are worth a listen on their own merits. (Naomi Clegg) Metro Music Hall, 615 W. 100 South, 7 p.m., $27 presale; $30 day of show, 21+, metromusichall.com