THURSDAY 3/21
Delicate Steve, Thick Paint
Steve Marion makes predominantly instrumental music that somehow speaks with unmatched soul. He's a guitar-playing whiz whose technical chops are unmatched in the indie-rock world—see his recording contributions with everyone from Amen Dunes to Kanye West to Paul Simon as proof. But there's a wild, almost-primitive energy that courses through the compositions Marion makes under the name Delicate Steve. Vibrations emanate from his axe with Frampton-esque allure; hipster snark is presented then skewered a la Mac DeMarco, one of Delicate Steve's frequent collaborators and touring mates. His fourth LP, 2017's This Is Steve, tried to demystify the aura of invincible creativity that Marion had built around himself, but on 2019's Till I Burn Up, he veers back toward the freaky, abstract terra firma from which his instrumental meditations originally sprang. Citing the early transformative work of Dr. John and Iggy Pop as inspiration, Delicate Steve says in a news release for Till I Burn Up that he's happy being a cult artist: "There is a confidence that comes with abandoning the idea of wanting to create something that everyone might like to check out." Don't miss the opportunity to watch him wring emotion out of his six string in Kilby Court's intimate environs. (Nick McGregor) Kilby Court, 741 S. Kilby Court, 7 p.m., $13 presale; $15 day of show, all ages, kilbycourt.com

FRIDAY 3/22
The Suffers, Memphis McCool
Although The Suffers could be considered a throwback to old-school soul, the multi-ethnic Houston-based band also combines rock, reggae, rap and hip-hop on their latest album, the appropriately named Everything Here. This dynamic eight-piece ensemble has been making music since 2011, and though Everything Here is only their second album, they've toured extensively, accumulating a steady stream of prestigious awards and making some highly touted television appearances as well. Kam Franklin's riveting vocals and the infusion of brass behind her enhance The Suffers' depth and delivery, making it little wonder they've become modern festival favorites. Clearly, they're beyond suffering at this point, though their handle does carry a relevant reference. It's taken from a 1978 Jamaican film of the same name, and during an appearance on The Daily Show, Franklin remarked, "In that film, the artists are actually the sufferers. The major labels aren't doing what they could be doing to make sure they get their just-deserved things. I feel like, as artists, we've been working for so long with no real reward or attention until recently." Seems somewhat bittersweet, but given The Suffers' savvy sensibilities, there was never any real doubt that this band is on the fast track toward stardom. Suffer no more, The Suffers. We're psyched to see you. (Lee Zimmerman) The State Room, 638 S. State, 9 p.m., $17, 21+, thestateroompresents.com

Sarah Shook & The Disarmers, Them Coulee Boys
Different people have different things to say about Sarah Shook, a North Carolina firebrand producing some of the fiercest country rock in the world. In 2017, when Bloodshot Record re-released Shook and her band The Disarmers' 2015 debut Sidelong, Rolling Stone hailed the "nonconforming spitfire" and her combination of "sneering punk-rock autonomy" and "brutal classic country honesty." Many outlets tromped right into stereotypical waters, however, portraying Shook as "so authentic you can picture her propped up in the doorway of her single-wide, curlers in her hair, ratty bathrobe flapping loose, cigarette dangling from the corner of her mouth, half-empty bottle of whiskey clutched tightly to her breast." (Thanks, No Depression.) In truth, Shook is much more than that: a mother and avid LGBTQ and safe space activist who channels her rage into action on new album Years, which moves away from the older dire straits of "Nothin' Feels Right But Doin' Wrong" and "Misery Without Company" toward the more hopeful outlook of "Good as Gold" and "What it Takes." Of course, Shook is still "Damned if I Do" on Years, learning all the "New Ways to Fail." As she says of the new album, which matches the psych-rock rumble of Ty Segall with the honky-tonk tears of Merle Haggard, "This record is about finding a way through exhaustion, betrayal, hangover after hangover, upper after downer after upper, fight after never-ending fight. It's about picking yourself up and dusting yourself off after years of being trampled and beaten down, jutting your chin out, head high, after they've done their worst, and saying, 'Still here.'" Look for Sarah Shook & The Disarmers to light it up and tear it down for the apres-ski crowd. (NM) O.P. Rockwell, 268 Main, Park City, 9 p.m., $15, 21+, shows.oprockwell.com

SATURDAY 3/23
Low
Do you ever have your mind absolutely blown when you discover someone is Mormon? If you haven't guessed already, the founders of Low, Alan Sparhawk and his partner Mimi Parker, are both members of the peculiar faith; Sparhawk has some tenuous Utah roots, too. Perhaps that's why they're playing at a venue with a deep local heritage, Provo's Velour, instead of a bigger Salt Lake City club. Or perhaps it's because Low's style—haunting harmonies and soft, fuzzy, expansive sonic landscapes that veer into distorted hisses and crackles—is uniquely suited to a smaller venue, one where the audience can listen in hushed, rapturous silence. And, if you listen closely, you can hear the language of Mormonism seeping into the music, like the lyrics of "Murderer," from the band's 2007 album Drums and Guns, which alludes to the Book of Mormon story in which Nephi murders a king, Laban, when commanded by God: "One more thing I'll ask you, Lord/ You may need a murderer/ Someone to do your dirty work." The band's spirituality is subtle, however, and has mass appeal. Last year, Sparhawk told NPR that he and Parker are interested in grappling with the big life questions: "I think our music a lot of the time struggles with, 'Who am I? What is truth? What is the correct path when you don't really understand what it should be?'" The band's most recent album, 2018's Double Negative, takes fragments of answers gleaned during a politically tumultuous two years and splices them together, resulting in a triumphant, yearning masterpiece of a record that rises and ruptures, the harmonies gliding and joining within a cacophony of noise. (Naomi Clegg) Velour Live Music Gallery, 135 N. University Ave., Provo, 8 p.m., $22 advance; $25 day of show, all ages, velourlive.com

MONDAY 3/25
Black Moth Super Rainbow, Steve Hauschildt, High Tides
The long-running experimental electronic band Black Moth Super Rainbow is back with a darkly euphoric album, Panic Blooms, its first full-length in six years. BMSR is a curious group. Led by reclusive frontman Tobacco, who uses a vocoder to mask his voice and convey a sense of flat, dead-eyed detachment, the other members of the Pittsburgh-based collective have names such as Iffernaut, Pony Diver and STV SLV. They generally prefer to stay shrouded in darkness while performing and wear masks when they're feeling extra mysterious, providing them with semi-anonymity and doubtless feeding into their cult-like following. On Panic Blooms, BMSR once again tip-toes the line between abstract noisemaking and melodic songwriting, using vintage analog instruments to produce a mix of paranoia-inducing blips and bleeps and warm, immersive sounds that aren't quite organic. It's like hearing whales mournfully calling across the ocean—then realizing the whales are cyborgs. Like all BSMR records, Panic Blooms has its poppy moments, but they're gone as soon as your toe starts tapping, replaced by woozy swells of sinister-sounding synthesizer and Tobacco's warped vocal melodies. The evening promises to be an absolute riot of drum machines and synths, as BSMR brings along Chicago-based electronic musician and Emeralds alumnus Steve Hauschildt, a composer of beautiful synthetic soundscapes, and hazy synth duo High Tides. (Howard Hardee) Metro Music Hall, 615 W. 100 South, 8 p.m. $17 presale; $20 day of show, 21+, metromusichall.com 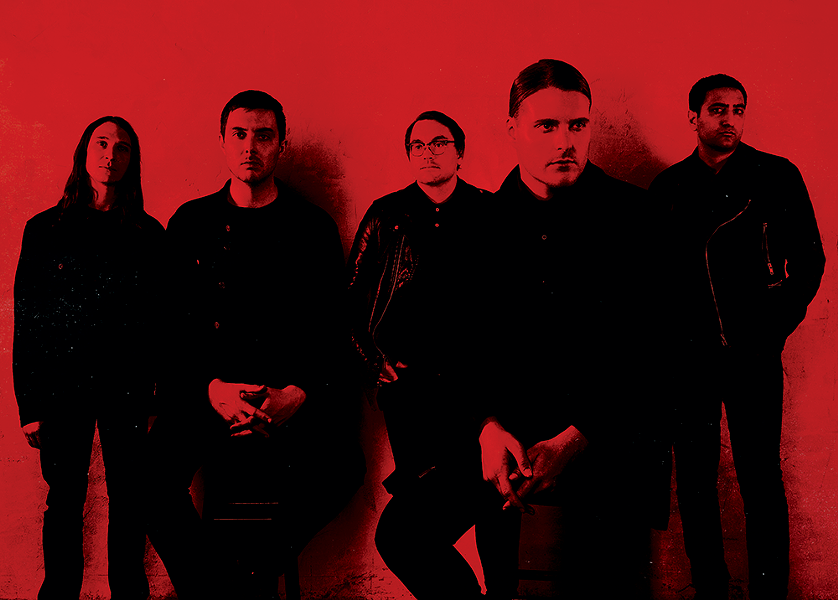 TUESDAY 3/26
Deafheaven, Baroness, Zeal & Ardor
Now that the 2010s are almost in the rearview, it's safe to say that Deafheaven (pictured) will go down as one of the decade's most important metal acts. Founded in 2010, the San Francisco group practically blew the scene apart in 2013 with Sunbather, which blended pummeling black metal aggression with spacey shoegaze and dreamy post-rock melodies. Sunbather—and Deafheaven as a band—continues to sharply divide fans and critics, but at this point one would be hard-pressed to deny their popularity and impact on the genre. Currently on tour in support of their newest release, 2018's Ordinary Corrupt Human Love, Deafheaven brings their intense, eardrum-annihilating live show to Metro Music Hall on a co-headline bill with Baroness, a Georgia-based sludge metal band whose 2015 album Purple found itself on many critics' year-end lists despite a December release date. Baroness' recent album announcement has many fans itching to hear some as-yet-unreleased songs performed live, as well. Also playing are Zeal & Ardor, whose own singular blend of black metal and traditional blues and soul music has been making waves recently. (Nic Renshaw) Metro Music Hall, 615 W. 100 South, 6:30 p.m., $28 presale; $30 day of show, 21+, metromusichall.com