FRIDAY 3/29
Hand Habits, Tomberlin, Harpers
Meg Duffy's effortless guitar pop might sound placid. But the music this upstate New York native records and releases as Hand Habits doesn't hide its intense emotional core. That ethos aligns with Duffy's collaborative work as a guitarist for Kevin Morby, William Tyler and Weyes Blood, similarly evocative songwriters who know how to encase heart-rending stories of human frailty in pleasant, catchy indie pop. Hand Habits' sophomore full-length, 2019's placeholder, expands on the insular sonic palette of 2017 debut Wildly Idle (Humble Before the Void). But placeholder still feels rooted in Duffy's personal life, surveying the pitfalls and passions of relationships both platonic and non-normatively romantic. "The songs on placeholder are about accountability and forgiveness," Duffy says in a news release for the album. "A big aspect of my songwriting and the way I move through the world depends on my relationships with people." That movement is evident on songs like "can't calm down" and "yr heart [reprise]," manifesting itself sometimes with confidence and sometimes with anxiety. "You were a boulder destructive with your anger," Duffy sings on "what's the use." "I've seen you move mountains with your eyes." It's that kind of startling clarity that lends placeholder its gut-punching power. It'll be exciting to see how Hand Habits morphs onstage, painting personal anguish with vivid splashes of guitar-driven color. Kilby Court, 741 S. Kilby Court, 7 p.m., $10, all ages, kilbycourt.com

SATURDAY 3/30
Laura Jane Grace & The Devouring Mothers, Mercy Union, Control Top
DIY hero, trans activist, best-selling author, songwriter, guitar shredder, culture warrior—all of these labels accurately describe Laura Jane Grace. One of modern music's fiercest voices, Grace has fronted folk-punk icons Against Me! since the mid-1990s, steering the band from the sweaty dive bars of North Florida to sold-out stadiums around the world. Sure, Grace was never shy about her ambition—see 2016 autobiography Tranny: Confessions Of Punk Rock's Most Infamous Anarchist Sellout—but that confidence also let her rage against the totemic white male infrastructure of rock 'n' roll on propulsive songs about gender dysphoria and societal injustice. Last year, Grace announced an Against Me! hiatus and a renewed focus on confessional intimacy with her band The Devouring Mothers, whose debut album Bought to Rot mixes the heartland rock of Tom Petty with the teary-eyed poetry of Mountain Goats. But tracks like "The Airplane Song" and "Apocalypse Now (& Later)" still brim with Grace's trademark honesty; in some instances, the storylines and narratives feel ripped right from her journal. And then there's "I Hate Chicago," a sarcastic lodestar that's somehow become a live favorite even though it finds Grace snarkily shitting on her own adopted hometown. That fact that she's still tossing off punk anthems a quarter-century after first pissing off her critics is just one reason why this Laura Jane Grace & The Devouring Mothers show is a must-see. Metro Music Hall, 615 W. 100 South, 7 p.m., $20 presale; $25 day of show, 21+, metromusichall.com

SUNDAY 3/31
Switchfoot, Tyson Motsenbocker, Colony House
In some circles, San Diego's Switchfoot is best known as a breezy surf-rock band that puts on an annual beach party called the Switchfoot Bro-Am. But there's far more at work inside Switchfoot's immense discography, which recently expanded to 11 studio albums with the release of Native Tongue in January. Rooted in the same kind of unflinching examinations of faith, love, spirituality and crisis that have fueled Switchfoot's work since the 1990s, Native Tongue finds this Christian band wrestling again with what it means to outwardly embrace your faith. Yes, they've won a Grammy for Best Rock Gospel Album, but many listeners might never pick up on the religiosity baked into such easygoing music. Chances are you'll feel the positivity inherent in songs like "Let it Happen" and "Prodigal Soul," though; as Switchfoot frontman Jon Foreman told Christian Post earlier this year, "My job is to be honest ... That's the way I want to sing, the way I want to play ... It's not my job to decide what the rest of the church is doing. It's just my job to be a specific part of the body that I've been called to be." Such sentiments might be hard to swallow for secular fans, until you realize that Switchfoot's music speaks to the universality of the human condition. Realizing that we're all just small parts of a beautiful, often-overwhelming whole doesn't just happen to the Christians among us. Likewise, absorbing Switchfoot's infectious message of unity delivered through uplifting rock is easier than you think. The Depot, 13 N. 400 West, $35 presale; $37 day of show, all ages, depotslc.com

MONDAY 4/1
JD McPherson, JP Harris
What better way to celebrate The State Room's 10th anniversary than with roof-raising rockabilly maestro JD McPherson? The Oklahoma native's artistic ascent corresponds nearly perfectly with one of our fair city's finest venues: off to a fast start in the 2000s, then working through inevitable growing pains before hitting its unapologetic stride. McPherson's reverence for the past has always struck a nerve with fellow revivalists, while serving as a thorn in the side of critics who complain about nostalgia. But the worn-out denim and greased-back hair was never the point for McPherson; instead of conforming to fashion trends, his love of classic country, jump blues, vintage R&B and old-school rock 'n' roll felt like the genuine article. On 2017's Undivided Heart & Soul, he wore that unvarnished identity with pride, singing about how "Style (Is a Losing Game)" while lamenting the "Desperate Love" he found "Under the Spell of City Lights" in his new Nashville home. But McPherson beat his haters to the punch on "Let's Get Out of Here While We're Young," howling in the chorus about how "We've worn out all the songs we've sung." It's a statement of purpose that hews closely to McPherson's heart; as he said in a news release for Undivided Heart & Soul, "This record was difficult for me to make ... It took a lot for me to say that I can't force these songs to be the way people are expecting." Sounds a lot like the committed creative vision that The State Room has pursued for a decade while competitors have come and gone. Bring your dancing shoes for what's sure to be a fierce, fun anniversary party. The State Room, 638 S. State, $30, 21+, thestateroompresents.com

TUESDAY 4/2
Smino, EarthGang, Phoelix
Smino doesn't suffer fools—himself included. After the St. Louis-born rapper released his sophomore album Noir last November, he told Rolling Stone he was already dissatisfied with the end result. The same went for his 2017 debut blkswn, which attracted the attention of hip-hop heavyweights like T-Pain and SZA. "There was a point when I got to the end of the project where I was like, 'I hate this shit,'" Smino said. "Then people are like, 'Oh my God! Breathtaking! Wowzers!' Oh, you like it?" That restlessness is a necessity in today's ever-changing rap landscape, where new superstars emerge out of the ether with nothing but a Soundcloud single to their name. Rather than toe the traditional rap line, however, Smino has branched out, in life and in art—moving from his native St. Louis to Chicago, incorporating Southern bounce and neo-soul into his sumptuous slant rhymes and taking 18 months between projects instead of pumping out singles to satisfy the internet-fueled rap machine. "I ain't aiming at the radio," Smino told Rolling Stone. "It change so much, if you aim for it, you be behind. It's running targets. Shoot ahead of them bitches." Asked about the follow-up to Noir, he answered in the most Smino way possible, too, skewering himself while raising the stakes for what comes next: "My next one after this one is a good chunk done. And I hate my new album right now. So I think it's about done." The Complex, 536 W. 100 South, 8 p.m., $25, all ages, thecomplexslc.com 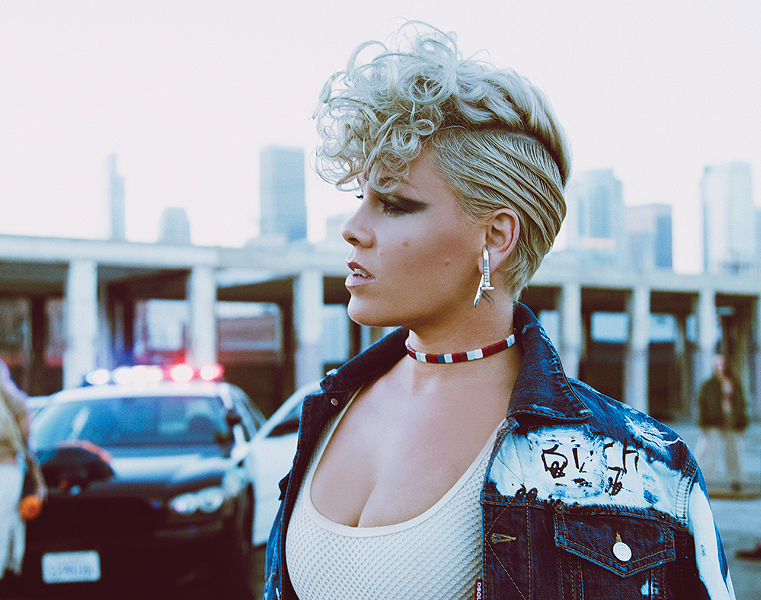 WEDNESDAY 4/3
Pink, Julia Michaels
It takes a special kind of chutzpah to name yourself after a color. But when the singer, songwriter and entertainer Alecia Moore adopted her moniker Pink as a teenager, she wasn't concerned with assuaging critics—or anticipating that, 20 years later, she'd be an international superstar. Wearing her rebellion proudly even as she came up in the Y2K pop machine, Pink's career has maintained more momentum than that of early contemporaries like Britney Spears and Christina Aguilera. She's sold more than 15 million albums and 45 million songs since her 2000 debut, Can't Take Me Home, which injected ferocity into her sugary mix of dance, R&B and electronic pop. Since then, she's specialized in uplifting, no-holds-barred anthems like "Raise Your Glass" and "Just Like Fire" while remaining romantic on radio staples like "Just Give Me a Reason" and "Try." Last year's full-length Beautiful Trauma continues that tradition, giving Pink prime airplay with "What About Us" while her accompanying arena tour has allowed the 39-year-old to hone the acrobatic aerial dancing routine that's become her specialty (look up her performance at the 2010 Grammys on YouTube for a primer). At Vivint Smart Home Arena next week, expect a few takedowns of the beauty-obsessed music industry and jabs at our current political situation—as well as the kind of gritty exhortation she delivered at the 2017 MTV Video Music Awards: "We don't change," Pink said in a speech dedicated to her infant daughter. "We take the gravel and the shell and we make a pearl. And we help other people to change so they can see more kinds of beauty." Kudos to Pink for helping us open our eyes to the real potential of pop music. (Nick McGregor) Vivint Smart Home Arena, 301 W. South Temple, 7:30 p.m., $54-$219, all ages, vivintarena.com