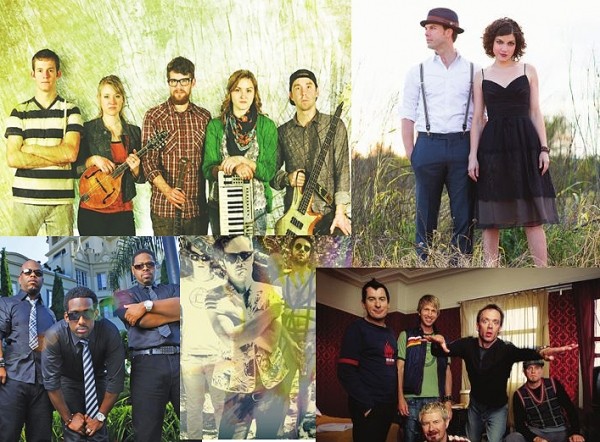 Coin in the Sea Album Release


The music produced by this local folk outfit is carefully crafted, note by note, chord by chord, and the deliberate process comes from more than just an innate attention to detail: Each of the five members has studied or is currently studying in BYU’s music program. At this album-release show, Coin in the Sea will release their new EP, Flint & Steel, which will be followed by a full-length concept album coming later this year. The band’s music—created with acoustic guitar, mandolin, keyboard, violin and slight touches of percussion—is deceptively minimal; it just feels simple because the instruments are used so economically. But don’t be fooled; the harmonies that lead vocalists John Goodman and Eliza Smith sing fit together as snugly and perfectly as two musical puzzle pieces. Nate Noble will start things off. (Kolbie Stonehocker)
Velour, 135 N. University Ave., 8:30 p.m., VelourLive.com


Boyz II Men
When I was in seventh grade, a girl who had a crush on me called me late on my parents’ landline and sang Boyz II Men’s “End of the Road” into the phone. It was terrifying, and because of that experience, I disliked the group for years. But that’s what’s sort of great about Boyz II Men; just about everyone I know who grew up in the ’90s has some sort of horribly awkward story about the Grammy-winning, Philadelphia-based R&B group. Now, whenever I hear an emotional ballad from the classic trio, I think about Angela and her oversize “urban” Looney Tunes T-shirt making 13-year-old me blush and uncomfortably attempt to hang up the phone. Thanks, guys. Ryan Innes and Mimi Knowles—who scored the opening slot by winning a recent Gigg.com contest—are also performing. (Colin Wolf)
The Complex, 536 W. 100 South, 7 p.m., $50, TheComplexSLC.com

Gravecode Nebula Album Release
With a member lineup that reads like a Game of Thrones casting call (give it up for Dyingnysus on lead Transplutonic Void Manipulation) and epic-length songs titled “Bloodcraft of Andromeda” and “The Frozen Sun (Does Not Support Life),” local black/doom band Gravecode Nebula are doing their damndest to keep The Metal where it belongs: underground—at least six feet underground. Gravecode Nebula’s long-in-production debut album, Sempiternal Void, is not for the faint of heart, eardrum or faith; it’s a six-movement assault in crashing waves of atmospherics and violence with all of the hopeful aftertaste of an absinthe & cyanide martini. Tonight is the CD-release show, though Sempiternal Void will be available later in the year on vinyl—as if hell needed to sound “warmer.” Demon Lung and Burn Your World will open. (Bill Frost)
Bar Deluxe, 666 S. State, 9 p.m., $5 in advance, $7 day of show, BarDeluxeSLC.com

The Ataris
Ah, 2003. If you’re my age, you were in high school then, probably wearing terrycloth wristbands and Hot Topic T-shirts while playing The Ataris’ seminal album So Long, Astoria as you carpooled to the mall with your friends. The album propelled the Indiana pop-rock band to mainstream success, especially with their earworm mega-hit cover of Don Henley’s “Boys of Summer,” which is still played all over the radio. To celebrate the 10th anniversary of So Long, Astoria, the original lineup that created the album is reuniting for the first time in a decade to play the entire anthemic, harmony-filled record from start to finish. Authority Zero, Drag the River and Versus the World are also on the bill.  (Kolbie Stonehocker)
In the Venue, 219 S. 600 West, 6 p.m., $18 in advance, $20 day of show, InTheVenueSLC.com

Young Dubliners
Los Angeles Celtic-rock band Young Dubliners—better known as the Young Dubs—are swinging their way through town for a pre-game St. Paddy’s Day show in support of their recently released album, 9. The band, fronted by Irishman Keith Roberts, formed back when cassette tapes overflowed out of glove compartments. With a sound comparable to London’s The Pogues, the five-man band mixes traditional Irish instruments and tunes with mounting guitar riffs. Their blues and rock songs honor American-made music, but Robert’s lilting Irish brogue, mixed with a mandolin in songs like “The Rocky Road to Dublin,” will take you away to greener pastures. Swagger and Brother will get things started. (Carly Fetzer)
The Depot, 400 W. South Temple, 8 p.m., $23 in advance, $26 day of show, TheDepotSLC.com; limited no-fee tickets available at CityWeeklyStore.com

Fever the Ghost
Fever the Ghost’s newly released debut album, Crab in Honey, is a refreshing blend of strange, psychedelic pop-rock sounds. The visionary Los Angeles band, formed in 2013, surprises listeners at every turn with complex, unpredictable synth sounds. But it’s not just the music that makes this band stand out. Their mind-expanding, hypnotic live performances are said to transport listeners to a far-out universe. Check out the track “Source” for a sample of their unique flair. Hott MT, Bronze Museum and Rare Monk start the night. (Deann Armes)
Kilby Court, 741 S. Kilby Court (330 West), 7 p.m., $8, KilbyCourt.com; limited no-fee tickets available at CityWeeklyStore.com

Saintseneca
It seems like tons of bands are toying with interesting acoustic instruments these days, but somehow, when Saintseneca does it, they create a sound that distinctly stands out from the cacophony. Blending instruments like dulcimer, mandolin and balalaika with electric guitar and slight touches of synths, the Columbus, Ohio-based quartet seem to have their feet in two different worlds: one rooted in the musical history of the Appalachian Mountains, the other in an innovative future. Multi-instrumentalist and main songwriter Zac Little is heavily influenced by the rural landscape in which he grew up, and that isolation comes through in the haunting “Uppercutter” and “Visions”—singles from Saintseneca’s upcoming new album, Dark Arc, out April 1. Saintseneca will hugely appeal to fans of Missouri folk-rock band Ha Ha Tonka; both have the ability to produce an evocative musical mood where melancholy and hope exist together. Vikesh Kapoor and Bat Manors will also perform. (Kolbie Stonehocker)
Kilby Court, 741 S. Kilby Court (330 West), 8 p.m., $7, KilbyCourt.com

Carrie Rodriguez & Luke Jacobs
Austin, Texas-born singer-songwriter and fiddler Carrie Rodriguez has been performing with guitarist/vocalist Luke Jacobs for more than three years. But it wasn’t until January that the duo decided to capture their undeniable chemistry by creating an album, titled Live at the Cactus for the Austin cafe where it was recorded live. Delightfully casual, intimate and breezy, the album plants the listener directly onstage with two accomplished musicians, as they smoothly harmonize and weave the sounds of their instruments together on Americana-rich songs such as “Devil in Mind” and “Get Back in Love.” Ben Taylor is also on the bill. (Kolbie Stonehocker)
The State Room, 638 S. State, 8 p.m., $12, TheStateRoom.com; limited no-fee tickets available at CityWeeklyStore.com