FRIDAY 3/16
Coin, The Aces
(No disrespect to Coin, but we've covered them before.) I'll admit to some concern that hometown girls The Aces signing to a bigger label (Red Bull Records) would see the already slick pop-rock group's considerable charms spit-polished to death. That would've been such a pisser, because they already had their shit together. Their songs are youthful, but written by older souls. They're Mormon girls from Provo, but they're not uptight—they'll drop an S-bomb and not give a fuck, which gives them an irresistible mystery. And onstage, they're just so right: four confident young women with distinct presences who play their individual roles well, but in service of a stronger, stunning whole. The idea that this could've somehow been corrupted by music biz bullshit—heavy-handed production and other such meddling—was nauseating. But their big-time debut album When My Heart Felt Volcanic finds The Aces sounding like themselves, which will make your heart erupt. And make the band, perhaps before the summer is over, deservedly huge. (Randy Harward) The Depot, 400 W. South Temple, 7 p.m., $20 presale; $22 day of show, all ages, depotslc.com 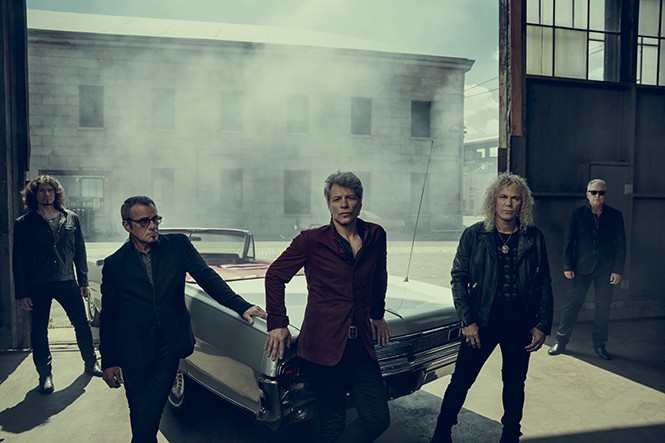 Bon Jovi
In 1984, I first heard a tinny version of the night-drive anthem "Runaway" coming from a transistor radio on an elementary school softball field. Everyone, boys as well as girls, was diggin' it. By 1986, even my synthpop-focused best friend was blasting Slippery When Wet. The New Jersey band had successfully merged the working-class Asbury Park sound (see Springsteen, Southside Johnny) with glam rock, and everybody loved it. But after New Jersey (1988), the band got infected with the dreaded cheese virus. Each subsequent album was more sanitized and sappy until Bon Jovi finally just issued a Nashville country album (red state music from a Jersey liberal, go figure). The move toward a more marketable pop sound was a smart career move; unlike some of their '80s peers, BJ can headline without a comparable support act. But now the new dreck outnumbers the classics in sets where you have to endure bland, boring lulls to get to the lightning. The band even looks more like Maroon 5 than the ragtag bunch of Jersey dudes that initially captured our attention. One unexpectedly bright point, however, is guitarist Phil X, who replaced longtime lead guitarist and co-face of Bon Jovi, Richie Sambora. The dude plays like a mofo, and his solo stuff ranges from badass, bluesy arena rock to power pop—none of it aimed at the vanilla people. (Randy Harward) Vivint Smart Home Arena, 301 W. South Temple, 7:30 p.m., $66.50-$546, all ages, vivintarena.com

SATURDAY 3/17
Cut Chemist, El Dusty, Chaseone2
Lucas McFadden goes by a descriptive and fitting stage name—what else does the DJ/producer do if not practice musical chemistry? He puts cuts on a 33-1/3 rpm centrifuge, separates what he needs, then mixes everything up until the pH is phat and the resulting solution is poppin'. He came to fame doing this in groups like Jurassic 5 and Ozomatli until 2006, when he dropped his first solo release, The Audience's Listening (Warner Bros.). Although he toured behind that and a 2007 collab with DJ Shadow, and continued to make DJ mixes and issue singles, his productivity slowed to a trickle between 2008 and 2012. According to his publicist, McFadden felt "isolated from the world and artistically uninspired." Fortunately for us, he found a way to keep going, discovering inspiration in working with live musicians. These sessions yielded his long-awaited second set, Die Cut, featuring contributions from the likes of his J5 homie Chali 2na, The Mars Volta drummer Deantoni Parks, Farmer Dave Scher and even the esteemed emcee Biz Markie. It's a long way from working only with samples, but the resulting solution pops like a sodium block in duck pond. (RH) The Urban Lounge, 241 S. 500 East, 8 p.m., $25, 21+, theurbanloungeslc.com

TUESDAY 3/20
Jazz at Lincoln Center Orchestra with Chick Corea
The Jazz at Lincoln Center Orchestra presents an unparalleled opportunity to witness an extraordinarily accomplished level of artistic creation. The band reprises a large swath of the history of jazz music, with their interpretations of works by Duke Ellington, Charles Mingus, John Coltrane, Thelonious Monk and other standard-bearers of this great American art form. This is a somewhat different JLO performance, as their regular bandleader—trumpet virtuoso Wynton Marsalis—is sitting out this tour. Replacing him is celebrated pianist Chick Corea. In a sense, the piano is the quintessential jazz instrument, as it combines a capacity for adept melodic improvisation with dense chordal harmonies and syncopated rhythms. Corea's genius has been that he can play in a wide variety of styles, and his own style of playing helped forge the jazz fusion genre. He has endeavored, in a medium sometimes seen as cool, to communicate warmth and expressiveness to his audiences. It might be interesting to hear how the JLO interprets Corea's compositions, many of which are considered jazz standards, alongside its own repertoire. (Brian Staker) de Jong Concert Hall at BYU, Provo, 7:30 p.m., $45-$85, arts.byu.edu

WEDNESDAY 3/21
Vundabar, Current Joys, Ratboys
Boston band Vundabar is getting to be kind of a big deal, garnering attention in the indie world. Singer/multi-instrumentalist Brandon Hagen wrote most of the songs on their third, self-released album, Smell Smoke (Gawk). Many of them detail the travails of caring for a sick relative—not exactly common lyrical fodder for a young upstart rock band. But that kind of dark insight is the best kind of introspection: Against a bouncy, noisy backdrop, they lay out anxieties and fears in place of a detached coolness. While the band is still small enough that Hagen himself is listed as PR contact, that might not last too much longer. As the solo project of Nicholas Rattigan, Current Joys is part of the post-MTV generation's experimentation with video, with emotional vicissitudes illustrated through visual imagery as much as soundwaves. Chicago post-country band Ratboys is in the early days of their career, ambling down a dusty, rock-strewn road on their second album, GN (Topshelf, 2017). (BS) Kilby Court, 741 S. 330 West, 7 p.m., $10 presale; $12 day of show, all ages, kilbycourt.com

OMD, Ggoolldd
At the peak of their success, the classic new wave band Orchestral Manoeuvres in the Dark (OMD) had a string of hits in the U.K., but they're perhaps best known in the U.S. for their 1986 hit "If You Leave." Despite becoming something of a forgotten band since their heyday in the mid-1980s, co-founders Andy McCluskey (vocals, bass) and Paul Humphreys (keyboards, vocals) are recognized as innovators of electronic music circles and are often labeled the "Lennon–McCartney of synth-pop." That might be a bit hyperbolic, but OMD was indeed ahead of its time. And the band is not without its charms: It's hard not to smile at lyrics as literal as those of "Electricity" ("Our one source of energy/ The ultimate discovery") or one of their campy music videos (seriously, check out the one for "Enola Gay"). OMD is celebrating their 40th anniversary this year, and they're accompanied by Ggoolldd, an up-and-coming dream-pop/electronic band out of Milwaukee, Wis., fronted by the dynamic and delightfully weird Margaret Butler. (Howard Hardee) The Complex, 536 W. 100 South, 7 p.m. (doors), $30 presale; $35 day of show, all ages, thecomplexslc.com