In contrast to what their name and hometown might suggest, Asheville, N.C.-based six-piece Holy Ghost Tent Revival play a style of laid-back, horns-filled rock that's pretty far from anything resembling gospel, but still has a lot of roosty soul and human authenticity. In fact, Holy Ghost Tent Revival's sound is more old school than Sunday school, a classic-rock-tinged blend of meandering bass lines and comfortable vocal harmonies that you can chill out and bob your head to. Besides getting yourself to this show, a good way to get an up-close look at Holy Ghost Tent Revival's warm, homey style is to look up the band's entry for NPR's 2015 Tiny Desk Concert Contest. In the video, they crowd around a desk in their living room and sing a rowdy rendition of "Trouble With the Truth," from their latest album, 2014's Right State of Mind. (Kolbie Stonehocker) Bar Deluxe, 666 S. State, 9 p.m., $6, BarDeluxeSLC.com


Comedic beatboxer Beardyman (born Darren Foreman in London) intertwines as many genres—hip-hop, dance, dubstep and reggae—as he does threads of sound with The Beardytron, his creation that enables him to loop live and improvise. His 2014 release, Distractions, features intricate beats and vocal manipulation that create layered and complex soundscapes. Track titles are humorous, like "Fndege.Gurp," an industrial, vertigo-inducing marvel that seems to move forward and backward simultaneously, and "Vampire Skank," a playful ode to dubstep. Beardyman garnered his cult following on YouTube with his video "Kitchen Diaries"—in which he breaks down the art of beatboxing—and his current video project is his "One Album Per Hour" series, in which the audience writes the track titles, and he builds an album, live and unrehearsed. (Tiffany Frandsen) Thursday, March 19@ The Urban Lounge, 241 S. 500 East, 9 p.m., $15, TheUrbanLoungeSLC.com; limited no-fee tickets available at CityWeeklyStore.com


At the end of 2014, Forrest Shaw (veteran of popular local political podcast The Left Show) was diagnosed with terminal prostate cancer. Now, his medical bills and household expenses are starting to stack up, so Salt Lake City's comedy, music and podcast scenes are joining forces to give Shaw and his family some much-needed assistance. Tonight's benefit concert will feature a diverse lineup of local talent, including comics Melissa Merlot, Taylor Hunsaker, Kristall Starr and Rebecca Frost, as well as bands/musicians Mary Tebbs, Molten Blue, L.P.X., Magda-Vega, and Dave Hahn with Fred Hebling. The goal is to raise $10,000 from ticket sales and a silent auction to go toward the Shaw family's medical debt and household bills (including their mortgage), as well as hopefully toward a family vacation so they can make some memories together. If you can't attend the show, donations are also being accepted at PodcastPhil.com. (Kolbie Stonehocker) Bar Deluxe, 666 S. State, 7 p.m., $15-$100, BarDeluxeSLC.com 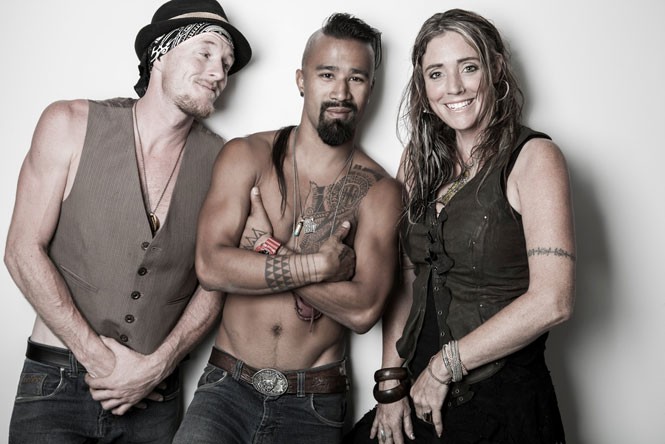 Spring Grüv: Nahko & Medicine for the People, The Motet & More


It would seem like spring has arrived in Utah a little early this year, but whether or not the ski resorts will get any more snow before the warm weather is here to stay, Canyons Resort is celebrating spring's arrival with its eighth-annual Spring Grüv mini-fest. Until the end of March, Canyons Resort is holding free concerts in the Resort Village for everyone with a lift or gondola ticket. The lineup features a diverse mix of local and national musicians, including Virginia jazz/funk/reggae musician Keller Williams and local party-rock cover band Changing Lanes Experience on March 20; Portland, Ore.-based hip-hop/tribal/folk group Nahko & Medicine for the People (pictured) and Minnesota reggae/EDM/jam band Jon Wayne & the Pain on March 21; and Colorado funk/dance outfit The Motet and locally grown The Patwa Reggae Band on March 28. (Kolbie Stonehocker) Fridays & Saturdays, March 20-28 @ Canyons Resort, 4000 Canyon Resort Drive, Park City, 3 p.m., free with lift/gondola ticket, CanyonsResort.com


The experimental "earthshaking future funk" created by Las Vegas musician Mike Silverman, aka That 1 Guy, is something you just have to see to believe. Back in the day, Silverman started out as a bassist, but, wanting to explore his own style and unique sound, built his own custom instrument he calls The Magic Pipe, which is essentially a stand-up bass made out of steel pipes, thick bass strings and various electronic components. And the didgeridoo-like sounds he gets out of this wild thing are insane; even if you watch all his hands and feet at work—as they wail on The Magic Pipe as well as a snare and bass drum—it's nearly impossible to track where each sonic nuance is coming from. All the elements somehow come together to form a sound that's bass-y, weird, spacey and full of visual and sonic surprises. (Kolbie Stonehocker) The Urban Lounge, 241 S. 500 East, 9 p.m., $15, TheUrbanLoungeSLC.com; limited no-fee tickets available at CityWeeklyStore.com.


After a series of family deaths in 2005, Michael Deni left his home in New Jersey and moved to San Francisco, where, armed with a synthesizer and a guitar, he started writing the songs that would become the beginnings of indie-rock/synth-pop act Geographer. Since then, Geographer has developed and deepened a sound that transports listeners through interwoven layers of wailing, shimmering synths and snappy pop rhythms. And at the center is Deni's delicate, hypnotic voice, which delivers poignant lyrics with graceful beauty. Geographer is performing at The Urban Lounge the same day the band is releasing its brand-new full-length album, Ghost Modern, which, as evidenced by new singles "I'm Ready" and "Need," is a must-listen. Wild Ones and Palace of Buddies will open. (Kolbie Stonehocker) The Urban Lounge, 241 S. 500 East, 9 p.m., $12 in advance, $14 day of show, TheUrbanLoungeSLC.com; limited no-fee tickets available at CityWeeklyStore.com


Although often awful to deal with, bouts of creative block can sometimes be the impetus that bands need to make groundbreaking change happen in their work—at least it was in the case of Seattle-based indie-pop band Craft Spells. After they released their Gallery EP in 2012, frontman/songwriter Justin Vallesteros moved to San Francisco to attempt to make inroads in the music scene there, but when that venture didn't work out, he relocated to his parents' house in Lathrop, Calif., to get a fresh start and deal with a case of creative slump. In his new surroundings, Vallesteros set aside his guitar for a year while he learned how to play piano, on which he wrote all the material for Craft Spells' second full-length, 2014's Nausea. In addition to piano, strings, floaty vocals and delicate guitar make up the lovely, dreamy sounds on Nausea; stand-out tracks include "Breaking the Angle Against the Tide" and "Changing Faces." The Bilinda Butchers and Koala Temple are also on the bill. (Kolbie Stonehocker) Kilby Court, 741 S. Kilby Court (330 West), 8 p.m., $10, KilbyCourt.com