FRIDAY & SATURDAY 3/30-31
Mark Owens
Idaho-born, Utah-raised country artist Mark Owens grew up listening to Marty Robbins, Jim Reeves and Little Jimmy Dickens. A desire to emulate his heroes eventually morphed into a 12-year stint touring the western United States to compete against other vocalists. Thanks to his smooth, stout voice—which hits somewhere between George Strait and Mark Collie—Owens won the 2000 Utah Pro-Sing National Singing Contest and the Colgate Country Showdown Competition (which has seen winners such as Billy Ray Cyrus and Miranda Lambert) in Nashville. In 2005, Owens formed the band that performs under his name, and they've been a popular draw at The Westerner and toured regionally. But in November, Owens says, he parted ways with his band of 13 years and began writing and recording with a new group of musicians. The new Mark Owens band has a new album locked and loaded, ready for release a month from now, along with a video for the lead single, "Drink 'Em Pretty." Expect to hear that tune among other originals (like the smokin' "Ring of Fire & Amazing Grace"), along with a generous helping of covers, at this show. "To give you an idea," Owens says, "[the covers] might be anything from Jason Aldean to 'Footloose' to an AC/DC tune." The Westerner, 3360 S. Redwood Road, 9:15 p.m., $5, 21+, westernerslc.com 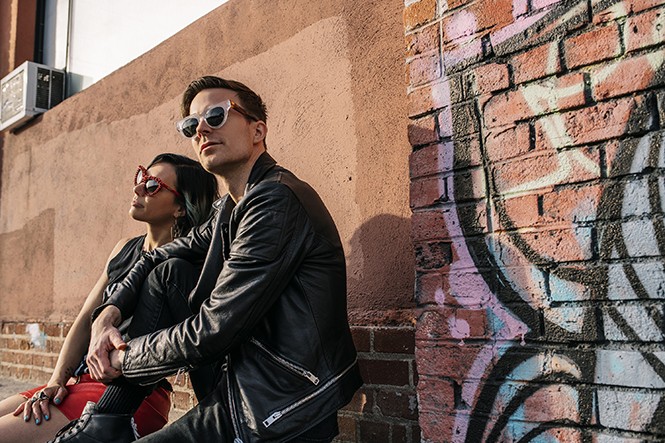 SATURDAY 3/31
Matt and Kim, Twinkids
It was only a matter of time before Kim Schifino, drummer for the relentlessly energetic duo Matt & Kim, hurt herself. After all, the lovebirds go hard during their storied live rave-ups, with Schifino beating the ever-loving proverbial substance out of her modest kit. Sometimes (OK, often) she even leaps from the poor thing—or the stage, as happened just over a year ago at Mexico's Festival Vaivén. After technical difficulties delayed the show by 30 minutes, she and Matt Johnson ran onstage with max vigor, jumping from their sides of the riser. To avoid landing on a cooling fan, Schifino landed awkwardly, tearing her ACL. Illustrating her adrenaline level (and drive and work ethic and gratitude to her fans), Schifino, after rolling around and clutching her knee, got up and played five songs before deciding to see a doctor. So that irrepressible ebullience in their simple pop-punk/hip-hop ditties? It's the real deal. After canceling the rest of their tour, the couple hunkered down in the wake of Schifino's surgery to write and record Almost Everyday (Fader), which they've called therapeutic, personal and exciting—because, Johnson says in a YouTube video, "It's so fuckin' real." Due in May, it features contributions from Blink-182's Mark Hoppus, Santigold, King Tuff and more. Obviously, they're back on the road, and no doubt reconsidering risky leaps—but going hard nonetheless. The Depot, 400 W. South Temple, 8 p.m., $25 presale; $27 day of show, all ages, depotslc.com

Strange Familia, Grey Fiction, Small Lake City
In terms of local music, danceable pop-rock is typically Provo's domain—but Strange Familia calls Salt Lake City home. Musically, however, they're still neighbors to the likes of Neon Trees and Imagine Dragons—though Strange Familia's percolating pop tunes share more DNA with non-local acts like '80s-inspired pop-rock group Walk the Moon, with a few strands contributed by electro-singer-songwriter Nick Murphy (Chet Faker). The trio's eponymous debut album, incidentally, was produced by Scott Wiley of Provo's June Audio (Neon Trees, Fictionist, The Lower Lights). It's been out for close to a year now, and the single "Odes" has already made a splash on Viral Top 50 charts from both Billboard and Spotify. There are easily another four singles (like the funky "Ms. Badblood," and the jaunty "Love/Drugs") among the album's other 10 tracks, too, so it's only a matter of time before the trio is less strange and more familiar outside of our borders. Joining them on this bill, presented by K-UTE Radio, are two other bands with a shot at national renown: once-local alternative rockers Grey Fiction (they're based in Portland now) and atmospheric indie rock quartet Small Lake City. (Randy Harward) The State Room, 638 S. State, 9 p.m., $13, 21+, thestateroomslc.com

SUNDAY 4/1
The Goddamn Gallows, Koffin Kats, Against the Grain, Spooky DeVille
If you speak fluent hyperbole, Facebook "about" page word clouds tell you a lot about a band. They're like job search/therapy couch free-associations, to which Detroit-bred punk-metal-bluegrass band The Goddamn Gallows responds: "Waffle House, weed, Jameson Irish Whiskey, European coffee, making nightly sex lists, Cee-Lo, Coast 2 Coast." Let's analyze that. Waffles, weed and whiskey aren't terribly telling; some folks call that breakfast—and that probably explains the Euro-coffee. But what's a nightly sex list? A record of debauchery intended, or transpired? How does soul-funk artist Cee-Lo factor in? And which Coast 2 Coast are we talkin' about: Space Ghost or Art Bell? We also have to consider the 3:1 Satan-to-Jesus reference ratio elsewhere on the page, as well as a claim of gender neutrality (preferring the "it" pronoun). Plus the horror, humor and comic-book references in their songs—"Shitwish" from current album The Trial covers the first two; "Saint O' Killers" from their 2007 debut Gutterbilly Blues is a reference to Preacher. When it comes to hyperbolic word clouds, this is an F5 on the Fujita scale—which is just about right for the musical cyclone that Mikey Classic (guitar, vocals), Fishgutzzz (bass, shouts), Baby Genius (drums, screams), TV's Avery (washboard, accordion) and Jayke Orvis (mandolin, banjo, vocals, screams) create. They It stirs all of the above into a ridiculously amusing dust devil of classic punk and metal along with the best elements of acoustic Americana. Metro Music Hall, 615 W. 100 South, 7 p.m., $18 presale; $20 day of show, 21+, metromusichall.com

WEDNESDAY 4/4
Phoebe Bridgers
Everyone loves a wunderkind, those bright young talents who appear seemingly out of nowhere to enchant us with songs straight from their ironically old souls. Los Angeles-based singer-songwriter Phoebe Bridgers released her debut full-length Stranger in the Alps (Dead Oceans) last year at the tender age of 23. Before that, she had a single, "Killer," produced by Ryan Adams (and issued on his PAX AM label), who has called her a "musical unicorn" and compared her to Bob Dylan. She has other noteworthy admirers, like John Doe and Conor Oberst, who sing on the album, along with a growing stack of glowing press raves touting her songwriting, lyrical candor, acerbic wit and taste. Speaking of taste, Bridgers covers Mark Kozelek's "You Missed My Heart" on the album, which is worth somewhere in the neighborhood of 30,000 cred points. Factor in her appreciation for Joni Mitchell, Leonard Cohen and Tom Waits, and how she mourns both David Bowie and Lemmy in one tune ("Smoke Signals"), and she's bucking for the high score. She's also been mopping up fans, opening for the likes of the Violent Femmes, The War on Drugs and Cat Power. Six of the 26 shows on her tour are already sold out, so take this chance to see her at Kilby while you can. Kilby Court, 741 S. 330 West, 7 p.m., $12, all ages, kilbycourt.com