THURSDAY 3/30
Modern English, Primitive Programme
Music history quiz: What popular British new wave/post-punk band began life as The Lepers? Modern English! (Did the header give it away?) But did you know that, as The Lepers, the English band's sound had more in common with post-punk gloom merchants Joy Division than the sunny synth-pop heard on Modern English's 1982 hit "I Melt With You," which made them a flagship band of the '80s, a time when the Union Jack again ruled the musical world. You've no doubt heard the song on the radio—or at least in the ubiquitous Burger King (original version) and Hershey's (twee cover version) TV ads. Their first few albums, from 1981's Mesh and Lace through 1982's After the Snow and 1984's Ricochet Days (all on 4AD), charted on both sides of the Atlantic and helped define a slick, danceable sound. After the inevitable '90s breakup and recent reunion, 2017 finds the group touting a new album, their eighth: Take Me to the Trees (Kartel Music Group), comprised of songs both dark and sunny, which sound as though they were written and recorded 30 years ago. That's a good thing, and this show represents a chance to melt with Modern English all over again (BYO cheeseburgers and chocolate bars). Primitive Programme opens. (Brian Staker) The Urban Lounge, 241 S. 500 East, 8 p.m., $20, 21+, theurbanloungeslc.com

FRIDAY 3/31
Regina Spektor
Even by pop-music standards, Regina Spektor has a most unusual backstory. A young émigré fleeing persecution in post-Soviet Russia, Spektor settled with her parents in New York City when she was 9 years old. Her classical piano studies continued at a conservatory, and she self-released her debut album 11:11 at age 21. Six years later, she had earned prominent billing at the 2007 Bonnaroo Festival, playing in front of a massive audience. Now with seven studio albums and two live discs to her name, Spektor is firmly established as a singer-songwriter. She has performed at the White House, and recently ventured into film and TV work with a cover of The Beatles' "While My Guitar Gently Weeps" for Kubo and the Two Strings and "You've Got Time," her punky theme song for the smash Netflix show Orange Is the New Black. Spektor also supports a number of charities, including HIAS, the organization that helped her family settle in the U.S. in 1989. Returning to the road after a four-year hiatus following the birth of her first child, Spektor is touring in support of 2016's Remember Us to Life (Warner/Sire). (Bill Kopp) The Great Saltair, 12408 West Saltair Drive, 7 p.m., $31.50-$33, thesaltair.com 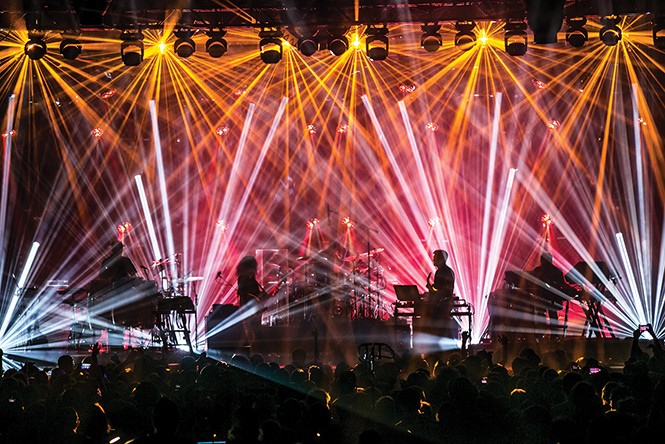 MONDAY & TUESDAY 4/3-4
STS9
Dub-psych unit Sound Tribe Sector 9, emanating from Georgia in the late '90s, quickly abbreviated their name to STS9—being, you know, into the whole brevity thing. Their initial release, Interplanetary Escape Vehicle (1998), was a preliminary foray into funk and jazz that didn't do much to presage their transformation into a mixture of jam-band and hip-hop rhythms, drum-and-bass, psychedelia, a quite subtle use of tape loops and repetitive segments and a fascination with the mysticism of Mayan culture. After moving their base of operations to Santa Cruz, Calif., in 2000, the group has toured incessantly, allowing them to both polish their sound and build an incredibly loyal fanbase that follows them from festival to festival. The title of their new release, The Universe Inside (1320 Records), suggests the spiritual unity of a tribe, the cosmic vision they aspire to, and the immense variety of their musical palette. The band also partakes in social activism for causes like food drives, Hurricane Katrina victims and renewable energy. (BS) Park City Live, 427 Main, 8 p.m. (doors), $45-$140, 21+, parkcitylive.net

MONDAY 4/3
Kreator, Deathblow, Bestial Karnage
Here in the States, we're pretty proud of our thrash metal bands: Metallica, Slayer, Anthrax, Megadeth, Exodus, Overkill. Around the same time that these bands heated up, the scene in Germany (and, regional designation notwithstanding, Scandinavia) pumped out bands like Kreator. Led by singer-guitarist Mille Petrozza, the band issued five albums of brutal, high-velocity thrash credited with helping to spawn the black- and death-metal genres. Today, Kreator is on its 14th album, Gods of Violence (Nuclear Blast)—and still delivers the goods. Petrozza's ragged shrieking and trebly riffing (alongside co-guitarist Sami Yli-Sirnio), buttressed by snare-smasher Jurgen "Ventor" Reil and bass player Christian "Speesy" Giesler, remain an exhilaratingly terrifying din, but the production is upgraded for the times, so it's kinda like watching a grindhouse flick on Blu-ray. Thematically, Petrozza still picks at metal's favorite bone—religion and the havoc it wreaks. "Currently, religion has regained a level of importance that I would have never considered possible 20 years ago," Petrozza says in the Gods of Violence press kit. "An extremely dangerous polarization is taking place, giving rise to growing hate among us all. That's what I wanted to write about." Here's hoping he's watching the news lately, and there's a Trump album forthcoming. (Randy Harward) The Complex, 536 W. 100 South, 6 p.m. (doors), $22 presale, $25 day of show, all ages, thecomplexslc.com

TUESDAY 4/4
Marco Benevento, Jackie Greene
Pianist, composer, producer and founder of the Royal Potato Family record label, Marco Benevento is often found working behind the scenes or in collaboration with others. However, among those who frequent New York's experimental music scene, he boasts a growing reputation for bending the boundaries between traditional jazz, electronica and trance. Yet, while his music might not fit neatly into any one of those particular boxes, his aural tapestries incorporate elements of each. The unifying factor is a steady, infectious groove that sweeps listeners along while keeping them eagerly enticed. Benevento—whose résumé includes stints backing AC Newman (The New Pornographers), Aaron Freeman (Ween) and Rich Robinson (Black Crowes)—often plays the role of a giddy cheerleader, and even when he ventures into darker realms, he effectively compensates through sheer effort and enthusiasm. Ace singer-songwriter Jackie Greene shares the bill, bringing with him a career that stretches back 17 years and includes stints with Joan Osborne, the Black Crowes and a notable pair of Grateful Dead offshoots: Phil Lesh and Friends and SRW, an acoustic trio with Bob Weir and the Crowes' Chris Robinson. Here again, Greene keeps good company. (Lee Zimmerman) The State Room, 638 S. State, 8 p.m., $25, 21+, thestateroomslc.com

Mandolin Orange, Eli West
Andrew Marlin and Emily Frantz, collectively known as Mandolin Orange, probe deep into the human psyche and make music that evokes the sentiment, if not exactly the sound, of Jackson Browne, The Band and the various troubadours who fall in between. Theirs is an approach that reflects the rugged resilience so common to most heartland heroes, replete with mandolin (natch), fiddles, harmonica, piano, acoustic guitars and the kind of forlorn harmonies that engender a particular air of authenticity. The melodies they create have an uncommon beauty, making the music ring with a sense of hopefulness and redemption sustained even in the most downturned circumstances, giving their songs an irresistible charm. It's little wonder that critics have hailed them as true Americana auteurs, with Rolling Stone citing their latest album Blindfaller (Yep Roc) among 2016's best country releases. Indeed, Mandolin Orange has a definite tang. (LZ) O.P. Rockwell, 268 Main, Park City, 9 p.m., $17-$34, 21+, oprockwell.com