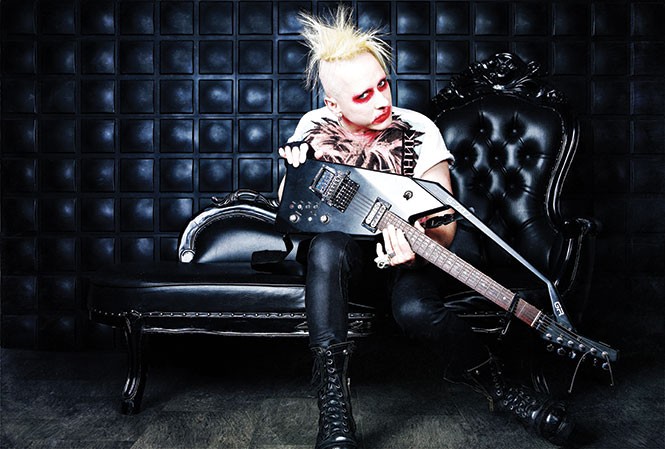 THURSDAY 5.12
Sköld
Some people know Tim Skold from the band Shotgun Messiah, a glam metal band too cool—and multifaceted—for such easy filing. Their music always incorporated plenty of punk influence and, toward the end, they edged toward a more industrial sound. While guitarist Harry Cody wound up in Tom Waits' band, Skold followed his industrial muse, recording under his own name as well as with genre heavyweights Ohgr, KMFDM (and MDFMK), Marilyn Manson, another glam-cum-industrial band the Newlydeads (with Faster Pussycat's Taime Downe) and Doctor Midnight & the Mercy Cult (with Hank von Helvete from Turbonegro). He's touring now behind Skold's long-awaited third album, The Undoing (Metropolis). (Randy Harward) Club X, 445 S. 400 West, 8 p.m., $10 in advance, $15 day of show, ClubXSLC.com

FRIDAY 5.13
Night Demon, Visigoth
Ventura, Calif., trio Night Demon is the metal band of your dreams. A power trio with left-handed Flying V guitar and right-handed Flying V bass up front, they fly multiple metal—and even punk—flags. Their sound is forged in new wave of British heavy metal, classic '80s metal, and the classic horror-punk of the Misfits (the imagery and the energy—even the whoa-oh backing vocals). On their Final Curse Tour, the band is playing their Century Media debut, Curse of the Damned, front-to-back. That's a move usually pulled later in a band's career, but when your second platter is a metric shit-ton of heavy metal fun, it's completely justified. Tonight they're joined by City Weekly's Best Metal Artist of 2016, Visigoth, whose album The Revenant King dropped on the iconic Metal Blade label last year—and was produced by local super-producer, Andy Patterson. Their brand of epic fantasy metal—rife with sorcerers, dungeons, arcane mists of prophecy and mammoth rides—is just as much fun as Night Demon's horror show. Blood Purge opens. (Randy Harward) Metro Bar, 615 W. 100 South, 8:30 p.m., $10 in advance, $12 day of show, JRCSLC.com

Lucius, Happy Hollows
Lucius (above) was formed by friends Jess Wolfe (lead vocals, synth) and Holly Laessig (lead vocals, keyboards) while both were attending the Berklee School of Music. They were later joined by Dan Molad (drums, vocals), Peter Lalish (guitar, vocals) and Andrew Burri (guitar, drums, vocals). Their latest album, Good Grief (PIAS/Mom + Pop/Dine Alone) is an ode to understanding the humor in pain (and vice-versa), couched in an unhinged indie synth-pop sound that can be quiet and pensive but also loud and exuberant—sometimes, and most pleasingly, all at once. With an excitingly versatile vocal range and intuition, Wolfe and Laessig are able to pull off Nico-esque whisper vocals circa 1967, Lana Del Rey croonings and the boisterous playfulness of Santigold, all while adding a semi-operatic flair that is definitively their own. Los Angeles-based Happy Hollows opens. (Zac Smith) The Complex, 536 W. 100 South, 8 p.m., $19.50, TheComplexSLC.com

Tortoise
The early 1990s—in fact, the year 1990—saw a number of highly influential bands start up, and you don't even have to look at the grunge movement to count a bunch of them. Female-fronted punk outfits 7 Year Bitch and Bikini Kill are touring again and, later this week, the Brian Jonestown Massacre comes to show how they've been able to "keep music evil" for a quarter-century. Chicago band Tortoise helped start the experimental post-rock movement, which often eschewed vocals in favor of restful, expansive instrumental excursions that sometimes barely seemed to qualify as rock, post- or otherwise, but ultimately served to expand the boundaries of the rock universe. Their most recent album, The Catastrophist (Thrill Jockey, 2016) includes, oddly enough, a cover of David Essex's 1973 glam rock hit "Rock On." They're joined by Chris Brokaw, known for his work with two other noteworthy '90s bands, Come and Codeine. (Brian Staker) The Urban Lounge, 241 S. 500 East, 8 p.m., $18 in advance, $20 day of show, TheUrbanLoungeSLC.com

SATURDAY 5.14
Fourth Annual WYOmericana Caravan Tour
Now in its fourth year, the WYOmericana Caravan Tour features the Americana and roots-rock of Screen Door Porch, jazz-funk and groove with Sneaky Pete and the Secret Weapons and The Littlest Birds purveying their own brand of old-time folk. As is often the case with music, these genre terms we use to describe them are elastic and blur at the edges between them, especially when you talk about something like "Americana," which means musical styles that come out of traditional American music like folk and blues. But when bands like these collaborate spontaneously onstage, it blurs the boundaries even more. Extended encore sets including all the musicians let them explore the commonalities among these styles. (BS) The State Room, 638 S. State, 9 p.m., $17, TheStateRoomSLC.com

MONDAY 5.16
Frank Vignola & Friends
Guitar virtuoso Frank Vignola is a spectacle all by himself, but this show is extra special. First, it's a celebration of the 21st anniversary of the GAM Foundation's JazzSLC concert series. Tonight, Vignola is joined by fellow guitarists Vinny Raniolo (with whom Vignola recorded last year's Swing Zing! album), Julian Lage, Olli Soikkeli and Jan Knutson, as well as violinist Grant Flick and bassist/vocalist Nicki Parrott. For a taste of the instrumental pyrotechnics and humor in store tonight, check out the Frank-and-Vinny performance of "Tico Tico/Apache" and the Frank-Vinny-Glenn Tosto rendition of "Beethoven's 5th" on YouTube. Then imagine it with three more guitarists, a violin, bass and vocals. Whoa. (RH) Capitol Theatre, 50 W. 200 South, 7:30 p.m., $33.50 +$4.50 service fee (student tickets available), ArtsSaltLake.org

MONDAY 5.16
Jedi Mind Tricks, Immortal Technique
Until last year, Philly-based hardcore underground hip-hop group Jedi Mind Tricks hadn't put out new music since 2011's Violence Begets Violence. But when rapper Vinnie Paz and producer Stoupe the Enemy of Mankind got together after working on separate projects, they knew the chemistry remained. The Thief and the Fallen (Juggernaut Sound) shows JMT still has it after almost 25 years, and demonstrates the expected eclecticism, with references to Van Morrison and samples of the Budos Band, as well as their trademark blend of intelligence and aggression. "I can still talk about Bill Hicks or Dostoyevsky in the same song that I'm referencing an AR-15," Vinnie says in JMT's bio. Co-headliner Immortal Technique, incidentally, did time for aggravated assault before channeling his anger into rhyme battles and activism, working with incarcerated youths and fighting for immigrant rights. Last year, he allegedly reverted to his old ways when he caught some dudes selling bootleg T-shirts. His last new release was the free digital album The Martyr in 2011, but a long-awaited new album, The Middle Passage, has been in the works since the mid-to-late 2000s. (RH) The Depot, 400 W. South Temple, 9 p.m., $$22 in advance, $25 day of show, DepotSLC.com

TUESDAY 5.17
The Expendables
Growing up in Santa Cruz, Calif.—a place where daily skating, surfing, partying and jamming is normal—it's no wonder that The Expendables make music so embedded with that local passion and Zen. They play a surprising amalgam of reggae, ska and metal, intermingled with mellow riddims, engaging storytelling and wild-but-tasteful guitar solos. Since their 1997 formation, Expendables have released six studio albums; the first three being independent releases, and signed to Stoopid Records, the label started by their peers, Slightly Stoopid. The Expendables have toured with the likes of 311, Kottonmouth Kings and Less Than Jake, and you may even recognize their song "Sacrifice" from 2004's Gettin' Filthy, as a playable option on Guitar Hero 4. (ZS) The Depot, 400 W. South Temple, 8 p.m., $17 in advance, $19 day of show ($2 surcharge for under 21), DepotSLC.com