FRIDAY 5/25
Grey Glass, Star-Crossed Loners, Telesomniac
For those of us who grew up listening to local alt radio—this writer used to plan his nightly routine around KXRK 96.3 FM's Top 10 Songs That Don't Suck program—solid, well-formatted alternative rock can be like a cool drink of water. That makes Grey Glass not an inappropriate band name for the Provo rockers. Their music goes down like an icy beverage, with enough tasty guitar licks to keep it sweet. Frontman Tal Haslam of San Diego, Calif., started the project in 2014 after relocating to Provo. He started performing at open mic nights, and eventually found bandmates, all of them similarly out-of-state transplants, who shared his appreciation for music—loud music. Now, a slew of small releases later, their dynamic sound has come to a head with their latest EP, The Middle After Death, which demonstrates their impressive range. They attempt everything from synth-driven indie to post-rock, all to great effect. The space created on "Fell (Asleep)" is truly atmospheric, and must satisfy Haslam's apparent fondness for Radiohead. The blues-y riff on "Coma" will knock you down. It's not difficult to picture the music live, but don't expect to hear every synth and studio effect; expect a rock 'n' roll show. Haslam recently described Grey Glass' live sets as "raw," saying that they love to get loud. "We prefer the raw energy to perfection," he told KSL Channel 5. Their arena-sized sound will certainly fill every inch of Velour. (Robby Poffenberger) Velour, 135 N. University Ave., Provo, 8 p.m., $8 presale, $10 day of show, velourlive.com

SATURDAY 5/26
Celtic Woman
Show-biz success is just as often a matter of design as happy accident. Celtic Woman could be considered the Gaelic version of the Monkees, that made-for-TV ensemble whose calculated origins brought them to the top of the charts. Conceived by three farsighted producers, including one who was responsible for the Irish export Riverdance, the group was originally made up of five musicians who were auditioned and assembled in 2004, and then brought to the public's attention and instant acclaim via a popular PBS television special shortly thereafter. Although the line-up has shifted considerably over the years, the basic formula—a formidable blend of traditional tunes performed with contemporary credence—has remained the same. As well it should: With nearly 20 albums released under the Celtic Woman banner, the group has sold nearly 10 million records worldwide, earning accolades and awards including half a dozen Billboard's World Albums Artist of the Year kudos, a Grammy nomination and the prestigious European Border Breakers Award in recognition of their international awareness. Claiming a sisterly bond, the group currently consists of three singers and an accompanying violinist, allowing Celtic Woman to redefine what the Irish mean by going for the green. (Lee Zimmerman) Capitol Theatre, 50 W. 200 South, 7:30 p.m., $87-$107, artsaltlake.org 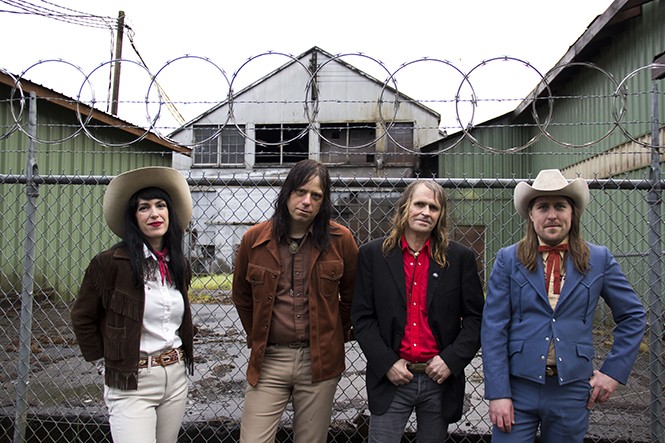 TUESDAY 5/29
Jenny Don't and the Spurs, The Hollering Pines, Michelle Moonshine
Jenny Don't and the Spurs place a premium on authenticity, unlike many of their contemporaries. For example, there's nothing intentionally ironic about the bolo ties and vintage Western shirts favored by the members of this country-punk band out of Portland, Ore. Frontwoman Jenny Don't likes to brag that she can actually ride a horse, and her piercing, aching voice rings of PBR, honky-tonks and true country. Indeed, they're far more indebted to Hank Williams, Ernest Tubb and Patsy Cline than the pitch-corrected stuff that gets played on pop country stations, hearkening back to the time when the lines between rock 'n' roll and country music were blurred and Elvis Presley and Johnny Cash made sense as tour mates. Ms. Don't is backed by an A-list group of PDX-area musicians, including Kelly Halliburton (of Pierced Arrows), Sam Henry (Wipers) and JT Halmfilst (too many bands to list). To get a vibe for their sound, Jenny Don't released their self-titled debut album in 2015, and it was chock-full of snappy, outlaw-country songs, including a cover of Nancy Sinatra and Lee Hazlewood's "Lady Bird." Last year, they dropped another full-length on Doomtown Sounds and Mississippi Records titled Call of the Road. This is music from the heart, folks. (Howard Hardee) Urban Lounge, 241 S. 500 East 8 p.m., $10, theurbanloungeslc.com

WEDNESDAY 5/30
Broncho, The Paranoyds, Valen
Broncho's particular brand of expansive indie rock both defies and defines the norm. A freewheeling band based in Norman, Okla., they—like fellow Sooner Staters Flaming Lips—have no problem bending the boundaries between genres, be it punk, hardcore, shoegaze or whatever flight of fantasy they happen to encounter. Indeed, that's the essence of an indie ethos, though it hasn't stopped them from taking advantage of more commercial concerns as well. With three albums to their credit—their latest being the highly lauded Double Vanity—their music has found feature placement in the HBO series Girls, various high-profile commercial campaigns and even an occasional documentary. Given their seemingly off-the-cuff approach, edgier intents and agitated antics, any sort of mainstream acceptance might seem unlikely at best, and indeed, given the band's informal beginnings—initiated when guitarist Ryan Lindsey recruited fellow guitarist Ben King and drummer Nathan Price for some solo sessions, then sent the results to original bassist Johnathon Ford for advice—their future trajectory never appeared planned, much less assured. Now, with Penny Pitchlynn on board playing bass, the band seems poised for a bigger breakout. Credit their imaginative ideas, creative concepts and, more recently, heaps of kudos from the critics. (LZ) Metro Music Hall, 615 W. 110 South, 8 p.m. $13 presale, $15 day of show, metromusichall.com

David Byrne
When you listen to David Byrne, it is strictly David Byrne. The legendary 66-year-old frontman of The Talking Heads. No effort is made to downplay his age or status. That's the key to his charm. These days, Byrne seems happy to play the part of art-rock's wise, whimsical patriarch. On the synth-heavy opener of his new album, American Utopia (Nonesuch Records), his voice drones robotically, "I dance like this because it feels so damn good." A few tracks later he waxes philosophical: "Every day is a miracle/ Every day is an unpaid bill/ You've got to sing for your supper/ Love one another." He's dispensing wisdom and championing a good time in equal doses. We shouldn't mistake Byrne's whimsy—which has always been part of his appeal—for a sign that he's gotten too comfortable. After all, the Grammy winner, Oscar nominee and Rock Hall of Fame inductee is remarkably relevant, especially when you stack him against his peers who have at best enjoyed a successful reunion tour (Devo) or one-off single (Television). In the last decade alone, Byrne has collaborated with some of our generation's most celebrated artists including St. Vincent and Florence Welch. He covered Janelle Monae's recent single "Hell You Talmbout" at a recent show—another indicator that he's a supporter of female artists. How can such a prolific artist condense a show into a reasonable setlist? Byrne takes a dash of covers, a thick chunk of Talking Heads songs and spreads it over a base of his best solo work. It's a confectionary delight—one worth feasting on. (Robby Poffenberger) Capitol Theatre, 50 W. 200 South, 7:30 p.m., sold out at press time, arttix.org