THURSDAY 5/30
GenderFuQ Pride Kick-Off Party
One of the most exciting times of year is here: It's Pride week! There is no better way to kick off this unparalleled time of love, acceptance and visibility for the LGBTQ community than attending the GenderFuQ Pride Kick-Off Party. Located at Metro Music Hall, and hosted by the fabulously fierce Mona Diet, the evening is full of punk rock, cabaret and drag performances—and guests are expected to come in their "greatest genderfuckery." The evening stars Shecock & The Rock Princess, who deliver heavy punk rock jams; Fists in the Wind, with punkish, comedic folk music; noisy rockers Press Gang Union; and jazzy, ukulele-fueled indie poppers Stop Karen, all accompanied by the drag performances of Gene Banner, Havoq Luscivia and Polly Yester. Sofia Scott—guitarist and vocalist of Shecock & The Rock Princess, and producer of the event—describes it this way: "GenderFuQ is a way for performing artists and musicians to collaborate, collectively taking a stand for transgender rights, visibility and awareness. Everyone has a masculine and feminine side whether they're queer or not and I see this as a way to embrace that and bring everyone together for Pride. We need the support now more than ever." With this goal in mind, let's kick off Pride by being ourselves and being proud of it—and soundtrack it with a great night of music. (Kara Rhodes) Metro Music Hall, 615 W. 100 South, 7 p.m., $15 presale, $20 day of show, metromusichall.com

FRIDAY 5/31
Mavis Staples, Band of Heathens, Pixie & The Partygrass Boys
Even at the age of 80, Mavis Staples has yet to slow down, continuing a career that began when she was a member of the preeminent gospel group The Staples Singers in the '60s and '70s. Her career still melds the threads of rock, R&B and sophisticated soul. Staples' new album, We Get By, her 12th solo set, finds her joining forces with Ben Harper to create one of the most exhilarating efforts of her more than half-century as one of the music world's most essential artists. Known for injecting passion and purpose into her performances, she continues to make humanity a mantra, while singing about important causes—such as justice, dignity and mutual respect—that are too often ignored. Indeed, Staples has always helped remind us that there are certain precepts that ought not be forgotten, yet another reason why she remains a beacon of inspiration in today's troubled times. It's little wonder that when the Americana Music Association named its nominees for 2019's Artist of the Year, Staples was included as a chief contender. Her appearance on the opening evening of the Ogden Music Festival—where she'll be preceded by Band of Heathens and opening locals Pixie & The Party Grass Boys—caps a night not to be missed. After all, it's not often that one has the opportunity to witness a living legend. (Lee Zimmerman) Fort Buenaventura, 2450 A Ave., Ogden, 6 p.m., $40–$120, ofoam.org

Wicked Bears, Fountain View, Odd Robot, Pity Party
They might hail from Salt Lake City, but Wicked Bears' sound is so steeped in the SoCal sounds of the '80s and '90s that one could be forgiven for assuming the band came straight out of Cali. The band's debut full-length Tuning Out is a blast of sun-soaked, sugary melodic hardcore that brings all the expected angst of pop punk, but presents it with a biting wit and eloquence rarely seen in the genre. For example, "Nickel Arcade" opens on an encounter with an attractive arcade employee, but where many bands in their vein would devolve into awkward adolescent fantasizing, frontman Casey Keele instead uses it as a jumping-off point for a lacerating tirade against late-stage capitalism. This Friday, Wicked Bears bring their tunes to The Underground for a night of loud, catchy fun. Joining them are fellow SLC pop-punkers Fountain View, whose new album This Song is About Friends serves up earworm hooks and anthemic choruses with impressive brevity, with nearly every song clocking in at less than 90 seconds. Also playing are Californian "chainsaw pop" act Odd Robot, and Oakland emo outfit Pity Party, both fresh off releases of their own within the past year. (Nic Renshaw) The Underground, 833 S. Main, 7 p.m., $7, beehivecollectiveslc.com 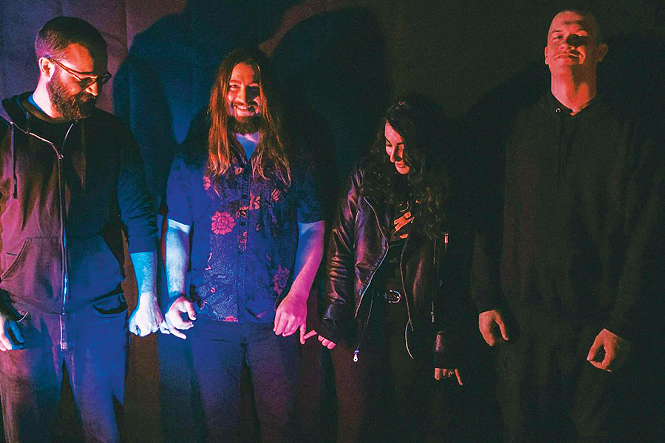 TUESDAY 6/4
Immortal Bird
Nature is metal. Think about it: Every aspect of nature involves something dying for something else to live. So what better way to commemorate how brutal nature can be than by paying homage via blackened death band Immortal Bird? What started as a project between vocalist Rae Amitay and guitarist Evan Berry turned into a full-time, hard-hitting, no bullshit band. And their members aren't just limited to the typical metal chops and growls. Amitay's background is in piano, and she graduated from Berklee School of Music. She explains that Berklee was expensive and that she does hope it impacted her in some way. Maybe it was the schooling that inspired the dark intros that kick off each of their songs from their 2015 debut Empress / Abscess. Immortal Bird are touring the west for their second album Thrive on Neglect, set for release this July. "We're pretty decent live, we practice a bunch, we like to move around, and we even warm up beforehand," Amitay says. Tongue in cheek, she adds, "Imagine hearing the music from our albums ... now, imagine that four people are recreating those sounds in a room that you paid between $5-12 to stand in! It's sort of like that." (Rachelle Fernandez) Kilby Court, 741 S. Kilby Court, 7 p.m., $10 presale, $12 day of show, kilbycourt.com

Snarky Puppy, Roosevelt Collier
Thirteen might seem like an unlucky number for some, but for Brooklyn-based band Snarky Puppy, luck isn't really needed. Led by bassist Michael League, the group has released 13 critically acclaimed albums at a remarkable rate, dating from the group's formation some 15 years ago. An uncommon combination of fusion-type experimentation and jam band fluency, Snarky Puppy isn't the smart-ass ensemble the name otherwise implies, but rather an intelligent and highly literate band of players capable of shifting styles and adapting to whatever realms are called for. Recent projects have found them working with such disparate artists as David Crosby (who recently incorporated Snarky Puppy into his current backing band), jazz-folk artist Becca Stevens, Crosby's colleague Michelle Stevens, and Indonesian singer Eva Celia, among many more. In theory, the ensemble—which can number as many as 20 players—appears to be the latest descendants of a progressive crossover approach pioneered by Miles Davis, Herbie Hancock, Mahavishnu Orchestra, Weather Report and Return to Forever, artists who expanded the parameters of traditional jazz and made it exciting and enticing to younger audiences who favored the power and passion of rock 'n' roll. The band's list of accolades and accomplishments testify to their prowess—three Grammys, several JazzTimes Readers and Critics' Poll Awards and a pair of similar citations from Downbeat magazine. Likewise, the group's latest effort, Immigrance, further exemplifies their prowess, having debuted at No. 2 on the Billboard Jazz chart. Here's to tossing this particular puppy yet another well-deserved bone. (LZ) The Commonwealth Room, 195 W. 2100 South, 8 p.m., $60-$75, thecommonwealthroom.com

WEDNESDAY 6/5
Johnnyswim
Marriage can be challenging enough as it is, and domestic bliss isn't always what it's cracked up to be. So credit any couple that can work together and create a harmony literally and figuratively. The L.A.-based duo Johnnyswim—comprised of husband and wife Abner RamirezandAmanda Sudano—have consistently accomplished just that. With three albums to their credit—their latest and best yet, Moonlight, was released on April 19—they share their buoyant melodies, pervasive hooks and close-knit harmonies in a way that's arched and enticing. Sudano comes by that talent naturally; the daughter of Donna Summer and Bruce Sudano (the man who wrote many of his wife's hits), she inherited a music gene that serves her well. Ramirez received his musical education at Douglas Anderson School of the Arts in Jacksonville, Fla. It's little wonder then that the pair has reaped such positive response, with Rolling Stone,NPR,The New York Times, Huffington PostandVH1 consistently singing their praises. Naturally then, this is a team effort, one that started strong and hasn't faltered since. Their 2013 debut, an EP titled Heart Beats, spawned the single "Don't Let It Get You Down" and garnered 17 million-plus Spotify streams in the process. The next single, "Home," culled from their first full-length outingDiamonds, was chosen as the theme song for HGTV's popular program Fixer Upper. Its successor, 2016's Georgica Pond provided the impetus for sold-out shows worldwide. Clearly, Johnnyswim is wading in the right direction. (Lee Zimmerman) Johnnyswim @ The Union Event Center, 235 N. 500 West, 7:30 pm, $28-$103, theunioneventcenter.com