SATURDAY 5/6
Brother Ali, Sa-Roc, Last Word, DJ Sol Messiah
Much more than just "the albino rapper," Brother Ali is bringing The Own Light Tour to Salt Lake City, coinciding with the release of his latest album All the Beauty in This Whole Life (Rhymesayers), the eighth in his prestigious 17-year career. Known for his socially conscious and uplifting hip-hop style, the Minneapolitan MC has paved the way for rappers wanting to create more than just catchy tunes. True to its title, Ali's newest album describes the gloriousness of everyday existence. Ali is joined on tour by fellow Atlanta-based artists Sa-Roc, Last Word and Sol Messiah. Sa-Roc has made a particularly large splash in the hip-hop scene with her passionate, spiritual lyrics and empowering message, while DJs Last Word and Sol Messiah have done likewise with their beats. (David Miller) The Complex, 536 W. 100 South, 7 p.m., $20 presale; $25 day of show, thecomplexslc.com

SATURDAY 5/6
Me First & the Gimme Gimmes, Kid Congo & the Pink Monkey Birds, Together Pangea
Before covers and tribute acts were almost nauseatingly ubiquitous, there was this band of punk rock all-stars including members of Lagwagon (rhythm guitarist Joey Cape and drummer Dave Raun), NOFX (bass player Fat Mike), Swingin' Utters/Re-Volts (vocalist Spike Slawson) and Foo Fighters/No Use for a Name (lead guitarist Chris Shiflett). As soon as they debuted in 1997, they became as popular as their other bands for their pop-punk covers of oldies, lite-FM songs, diva balladry, showtunes, folk music, CB-radio country, opera, classic rock and Jewish standards (among other things). Live, they generally enjoy acting the fools, as pop-punk manchildren are wont to do (not that there's anything wrong with that), performing in crazy lounge-band costumes—and, at least on one Warped Tour, serving drinks backstage at their portable Tiki bar (of course they checked IDs). Disclaimer: Since some of their members are busy with their main gigs, they often can't tour with Me First. On this tour, Fat Mike is replaced by Bad Religion's Jay Bentley, while Chris Shiflett is covered by his brother Scott (of Face to Face and Viva Death). Kid Congo & the Pink Monkey Birds, the current project by rock 'n' roll legend Kid Congo Powers is touring behind their fourth album, La Araña Es La Vida (In the Red) which, as with everything powered by Powers, is electrifying. Together Pangea opens. (Randy Harward) The Depot, 400 W. South Temple, 7 p.m., $20 presale; $22 day of show, all ages ($2 surcharge for under 21), depotslc.com 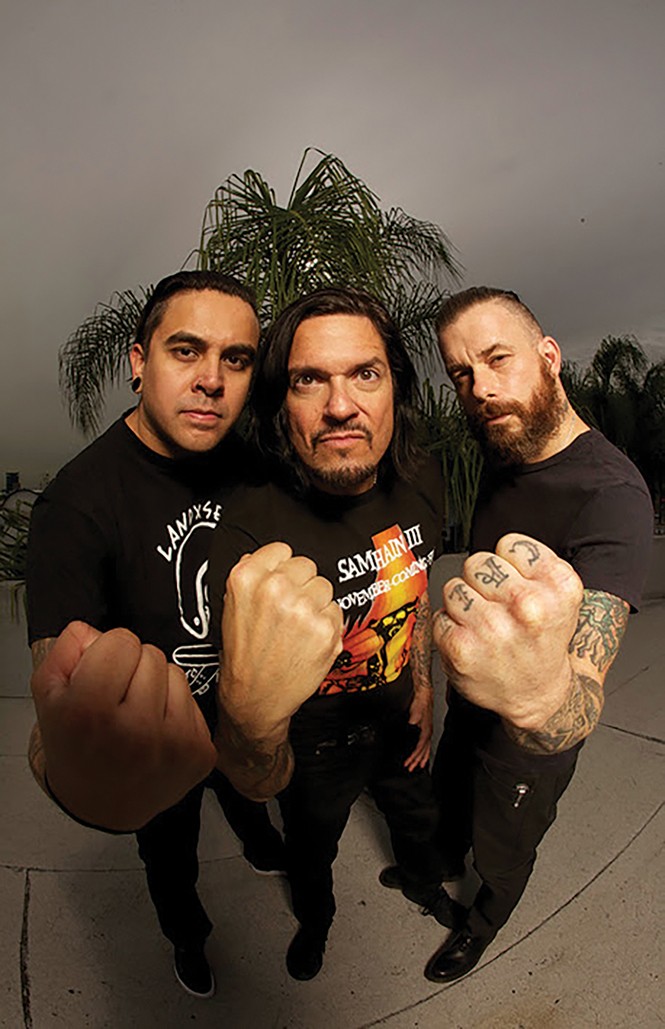 SUNDAY 5/7
Testament, Sepultura, Prong
Heavy metal geeks often debate whether the Big Four of thrash metal (Metallica, Megadeth, Slayer, Anthrax) should be expanded to the Big Six or Eight. The Bay Area thrashers of Testament always come up in these discussions, and often make the expanded lists. The band is one of the true greats of the genre, owing to their tight, frantic songs the burlier-than-Hetfield vocals of Chuck Billy and the guitar wizardry of Alex Skolnick and Eric Peterson, supported by the litany of thrash luminaries who've played in the band over the years. Their first singer was Steve Souza of Exodus (another perennial Big Six/Eight candidate); Skolnick's original replacement was Gene Alvelais of Forbidden; and all three of Slayer's drummers have manned the kit in Testament. Brazilian thrash group Sepultura also often enters the "Big [X]" debate, attributable to their musicianship and their interpolation of traditional music from their homeland. But while we're discussing great unsung metal bands, Prong is one that's respected, but not nearly as popular as they oughta be. Their first three albums are metal classics—and the first two, 1989's Force Fed (Spigot/In-Effect) and 1990's Beg to Differ (Epic), feature Salt Lake City's own Mike Kirkland (Bob Moss, Jeff Crosby & the Refugees, Nate Padley). "Lost and Found" from Beg was the theme song to MTV's Headbanger's Ball, which played the hell out of tracks from the band's breakthrough third album, 1991's Prove You Wrong (Epic). And many MMA fights, as well as some hockey and football games, have used the band's irresistible stomper "Snap Your Fingers, Snap Your Neck" from the band's 1994 album Cleansing, which marked a detour into a more industrial strain of thrash. Since then, singer-guitarist Tommy Victor—himself possessed of a singular voice and guitar style—has kept Prong sharp while playing guitar with Danzig. Any way you slice it, this bill is a Big Three. (Randy Harward) The Depot, 400 W. South Temple, 6:30 p.m., $25 presale, $30 day of show, depotslc.com

TUESDAY 5/9
Kiefer Sutherland, Rick Brantley
Given his popularity, actor Kiefer Sutherland could've dropped an album long ago. Instead, the longtime musician scratched his musical itch by working with his good friend, singer-songwriter-producer Jude Cole, at their label and studio Ironworks. The label's first release could easily have been Sutherland's debut, but they instead signed esteemed Canadian singer-songwriter Ron Sexsmith. That record eventually came out via V2, making Ironworks' flagship release. The 2006 blues-rock act Rocco Deluca & the Burden's debut album and documentary, I Trust You to Kill Me. Then, in 2008, Ironworks issued acclaimed debuts by folk-rock duo HoneyHoney and garage rock buzz band Billy Boy on Poison and, more recently, Lifehouse's 2015 album Out of the Wasteland. Finally, 15 years after inception, the label released Sutherland's first album, Down in a Hole. Although he calls it a country album, it's influenced as much by classic rock, and that hybrid seems to be a favorite of so-called "actor bands" (lookin' at you, Kevin Costner, David Duchovny and Kevin Bacon). Sutherland, however, is well-suited to this sound, with a boozy, cig-scorched rasp (go figure) and 11 deeply personal songs—co-written with ace tunesmith Cole—that range from better-than-average to damned good. Now touring with a band that features dada guitarist Michael Gurley as musical director, Sutherland is proving he's as good in front of an audience as he is on screen. Singer-songwriter Rick Brantley opens. (RH) The Urban Lounge, 241 S. 500 East, 8 p.m., $25, 21+, theurbanloungeslc.com

Vieux Farka Touré, The Weekenders
Military service often runs in families. Ali Farka Touré came from a long line of soldiers in the African nation of Mali, but instead became a guitar legend, and a Grammy honoree. So when his son, Vieux, wanted to travel that same musical mile, Ali preferred his son would have enlisted, citing the stresses of a musical career Touré pere had experienced. Vieux eventually convinced his old man, and the master appeared on his son's eponymous debut album, recorded shortly before Ali's death from cancer in 2006. A noted guitarist in his own right, Vieux is known as the Hendrix of the Sahara (rivaling Tuareg nomads Tinariwen) for his mixture of rock and blues tonalities with music of the region, and fluid style that make it look effortless. Also on the bill: Special guest The Weekenders, a local band known for guitar heroics and the studio wizardry of six-stringer/producer Mike Sasich. Their second album, Bright Silence of Night was released in 2016. (Brian Staker) The State Room, 638 S. State, 8 p.m., $18, 21+, thestateroomslc.com