THURSDAY 11/1
Nnamdi Ogbonnaya, Sen Morimoto, Rahz
If you drew a straight line through Chicago's hip-hop lineage—from Common to Kanye to Chance the Rapper to Chief Keef—the natural endpoint would be Nnamdi Ogbonnaya. Synthesizing decades of influences, from blues to jazz to experimental rock to DIY punk, Ogbonnaya specializes in a cerebral brand of rap music that's as comfortable exploring complex time signatures as it is launching into pop-ready choruses. Equally diverse are the lyrical inquisitions into Ogbonnaya's own multi-hyphenated history: He's a first-generation Nigerian-American who was raised with both traditional Jewish and eccentric Christian mores, but he's also a typical big-city 20-something whose musical taste skews toward the oddball and whose fashion sense is all over the map. Onstage, he sometimes performs with a nine-piece band; sometimes he carts a basketball hoop up and asks the crowd to take shots. Don't miss a dose of his frenetic energy here in the intimate environs of Kilby Court, with support from Sen Morimoto, part of Ogbonnaya's Sooper Records family, and local rhymesayer Rahz. (Nick McGregor) Kilby Court, 741 S. Kilby Court, 7 p.m., $10 presale; $12 day of show, all ages, kilbycourt.com

FRIDAY 11/2
Lina Tullgren, Wax Chattels, Drahla
In tight-knit industry circles, Captured Tracks is considered an iconic record label. Partially responsible for the meteoric rise of indie rock jokester Mac DeMarco, they've also discovered offbeat, underground talent from all corners of the musical stratosphere, helping everyone from Uruguayan folk singers to Canadian punks to Danish DJs reach a wider audience. To celebrate its 10th anniversary, Captured Tracks decided to stick with that forward-thinking approach, focusing on where the label is headed rather than where it's been. To that end, three developmental artists with one or fewer records—Maine-born, Swedish-folk trained fiddle player Lina Tullgren; menacing New Zealand rockers Wax Chattels; and dark, wiry UK post-punks Drahla—have loaded up in the Captured Tracks van for a nationwide tour. Perhaps you'll walk away from Tullgren's stoic, forceful set with a new appreciation for the potential of solo performance. Maybe Wax Chattels' pummeling, precise set will reset your definition of a power trio. Could Drahla be the next Parquet Courts, combining smarmy lyrics with razor-wire-tight instrumentation to devastating effect? You'll only know if you catch this rare combination of up-and-coming bands. (NM) Diabolical Records, 238 S. Edison St., 8 p.m., $10, all ages, facebook.com/diabolicalslc

SATURDAY 11/3
Wild Nothing, Men I Trust
Jack Tatum's dream-pop project Wild Nothing debuted in 2010 with Gemini, an album praised for its lo-fi charm and indie accessibility. Tatum has produced three more albums since, most recently Indigo, which is strikingly similar to Wild Nothing's first LP—the jangly guitars, twinkling synthesizer and aspirational vocal melodies all remain intact. The most noticeable difference is in production values, as second track "Oscillation" is wreathed in a lush string section that Tatum undoubtedly would have replicated with a shoddy-sounding synth pad back in the day. It's a familiar story: Bedroom musician gets popular, gets money and gets access to fancy studio equipment. And, of course, it's eternally debatable whether access to greater resources makes for better music, or working within rigid parameters actually fosters creativity. The answer is that it depends on the context for the musician. "My entire 20s have been spent on this project, and in that sense you inherently find the limitations in what you make," Tatum says in a news release for the album. "With the last record I was trying to stretch out as far as I could, but with Indigo I've created something that has homed in on its own identity." In this case, it feels like he's still working in his bedroom, except his bed has been replaced by a giant, Justin Timberlake-style mixing board. Support comes from Men I Trust, an indie-dance band from Quebec City, Canada. (Howard Hardee) The Urban Lounge, 241 S. 500 East,
8 p.m., $25, 21+, theurbanloungeslc.com 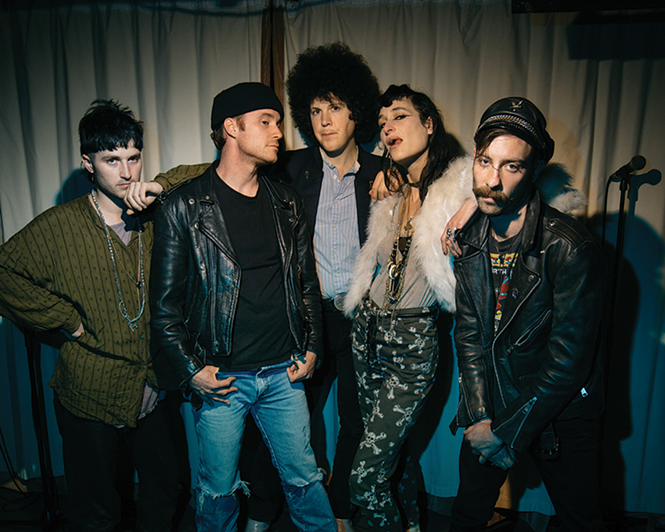 Black Lips, Surfbort
Are their guitars out of tune? Are they singing out of key? Probably—shut up. After nearly two decades of touring and recording, it's clear that Black Lips don't give a rat's fanny about pretty much anything. Formed by high-school dropouts—er, more like kick-outs—from a sleepy suburb of Atlanta, Ga., the five-piece garage-rock band has established a piss-off attitude and a penchant for absolutely crazy live shows. Get this: In 2009, Black Lips caused an international incident in Chennai, India, when guitarist Cole Alexander stripped naked, dove into the crowd and then re-emerged for make-out sessions with his fellow band members. (No wonder he got kicked out of high school.) Apparently, that sort of thing doesn't fly in Chennai, either, because the show's financial backers furiously threw the Lips off the entire Indian tour. But that was then. They're all grown up now, as demonstrated by 2017 album Satan's Graffiti or God's Art?, produced by none other than Sean Lennon (yes, John Lennon's son). It's a mature and focused record—wait, what's that? You're not buying it? Yeah, you're right. Bodily fluids will probably still fly when Black Lips play SLC with an opening set from Surfbort, a four-person, female-fronted Brooklyn punk band known for its nihilistic attitude and affinity for nasty, shrieking guitars. (HH) Metro Music Hall, 615 W. 100 South, 8 p.m., $20, 21+, metromusichall.com

SUNDAY 11/4
Molly Burch, Jesse Woods
A first listen to Austin, Texas, singer-songwriter Molly Burch reveals a smoky, languorous voice well-versed in professional jazz and classic country. But deeper examination finds Burch's voice intertwined effortlessly with the high-pitched guitar of Dailey Toliver, her longtime artistic and personal partner. Some might say it's their chemistry that allows for such dexterity, but the perspectives on Burch's albums—2016's Please Be Mine and 2018's First Flower—are decidedly, unabashedly hers. On new single "To the Boys," she chastises the male gaze and derides standard-order chauvinism with gentle authority, flexing a decidedly feminine strength. On "Wild," Burch examines her often-debilitating anxiety, lamenting her careful nature before embracing the fact that timidity can lead to its own sense of spontaneity. Still, this is a sound that's undeniably alluring for anyone nostalgic for the power of a torch-lit ballad. Swoon if you must, dance if you want, but don't sleep on the quiet power of Molly Burch. (Nick McGregor) Kilby Court, 741 S. Kilby Court, 7 p.m., $10 presale; $12 day of show, all ages, kilbycourt.com

WEDNESDAY 11/7
Chuck Prophet & The Mission Express, Paul Jacobsen
The quintessential California singer, songwriter and guitar shredder, Chuck Prophet initially rose to prominence at the helm of '80s neo-psychedelic outfit Green on Red. In the three decades since striking out on his own, Prophet has released a series of singular solo albums that have defined him as a dedicated Americana auteur. His latest record, Bobby Fuller Died for Your Sins, was inspired in part by the unsolved murder of seminal rocker Bobby "I Fought the Law" Fuller. But in a larger sense, the album represents the mystique of the Golden State itself. "California has always represented the golden dream," Prophet says in a news release for the album. "It's the tension between romance and reality that lurks underneath the surface in all noir films and paperbacks that connects these songs." That distinct divide marks most of Prophet's work, either on his own or with other artists—and the results are consistently fascinating. Oddball eccentric Jonathan Richman once described Prophet's signature style as "gasoline in the sand, like a motorcycle at a hot dog stand." We're not sure what that means either, but Prophet is that rarest of rockers: one whose darkened gaze remains hopeful and astute. (Lee Zimmerman) The State Room, 638 S. State, 8 p.m., $22, the stateroom.com