FRIDAY NOV. 27
Jerry Joseph & The Jackmormons
There are performers, and there are performers. Jerry Joseph takes it to an even higher level. Salt Lake City knows this well, since Joseph and his band used to call SLC home. When he's onstage, he can't stand still—he rocks, sways, stumbles and poses while wringing tortured chords from his Stratocaster and talk-singing his demons to life. This, while his ace band—now featuring Jeff Crosby, a fine singer-songwriter himself, on guitar—lays down tight grooves behind him. With a discography a mile long, including 2014's Singing in the Rain and the new two-track, 31-minute Istanbul/Fog of War (both on his Cosmo Sex School label), and songs that you can feel deep in your gut, Jerry Joseph is someone you need to hear, and see. Just ask Widespread Panic, who cover his tunes. (Incidentally, Panic's bass player Dave Schools produces Joseph's records and plays with him in Stockholm Syndrome.) Jerry Joseph is absolutely the real deal. Bring cash, 'cause you'll want every disc—including his stuff with Stockholm Syndrome—and a T-shirt. Hell, pick up some of Crosby's stuff if it's there. Then remember he's playing a CD release show at the State Room on Dec. 12. (RH) The State Room, 638 S. State, 9 p.m., $10, TheStateRoomSLC.com 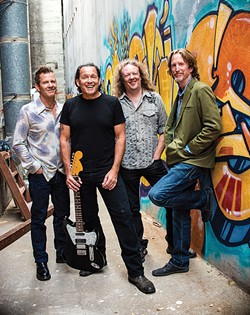 SATURDAY NOV. 28
Castro & the Painkillers
There's a video on YouTube from the Montreux Jazz Festival earlier this year, where Tommy Castro and his band come onstage to the strains of R.L. Burnside's "It's Bad, You Know." Then they tear into a cover of B.B. King's "Bad Luck." When your entrance music and your first track refer to two disparate blues greats, you know the dude onstage has deep love and knowledge for the blues. The rest of the 68-minute show, which features tracks from Method to My Madness, Castro's fourth album for venerable blues label, Alligator Records, proves he and the Painkillers have the chops to accompany that love. (Randy Harward) The State Room, 638 S. State, 8 p.m., $20, TheStateRoomSLC.com

SUNDAY NOV. 29
Megan Peters
Once upon a time, local folksinger Megan Peters and her band Big Leg were a hot draw in the local music scene. So much so, in fact, that Peters won City Weekly's South-by-Southwest Showdown to Austin, and we sent her to SXSW to represent the best of SLC music. The year after, 1994, Peters moved to Austin, although she continued to transit back and forth to play for the loyal audience she'd built up at coffee shops and similar venues in this area. After a few years and releasing several albums, she's returned to the Beehive State, seasoned by her time in Texas's music mecca. Her piquant fingerpicking and mellifluous voice make her sound something like Cheryl Wheeler, or a less strident Ani DiFranco. This evening show (starts at 6, ends at 8) will be Peters's second visit to The Garage in as many months. Last time, it was part of an evening of musical duos, but this time she'll shine with a solo set. (BS) The Garage on Beck, 1199 Beck St., 6 p.m., free, GarageOnBeck.com

TUESDAY DEC. 1
mr. Gnome, New Shack
Much like clowns, there's something unsettling about a gnome. More than apparitions of outright creepiness, a figure that mixes endearment with a "creep factor" is far more anxiety-producing. Cleveland duo Nicole Barille and Sam Meister are married, so you might call them mr. and mrs. Gnome. The singer-guitarist and drummer couple meld sometimes mechanistic, at other times spacey, sounds in a prog-psych hybrid that emphasizes her haunting vocals and his hypnotic rhythms. Their eighth release, The Heat of a Dark Star (El Marko Records, 2014), takes its title from a phrase in a Neil Gaiman book. As the title implies, the collision of light and dark is intriguing, and for a duo, their sound mix has surprising prog-rock depth. Local dark wave band New Shack opens. (BS) The Urban Lounge, 241 S. 500 East, 9 p.m., $12, TheUrbanLoungeSLC.com

WEDNESDAY DEC. 2
Lights, The Mowgli's
The "power" of power pop is its levity and sheer glee, as much as the lyrical content might describe the vicissitudes of passion. SoCal pop group The Mowgli's were named after a band member's dog, who was named after the character from The Jungle Book—can you think of anything cuter than that? In their 2013 Billboard Alternative chart hit "San Francisco," Dave Applebaum sings "I'm in love with love/ with the idea of," handily distilling the essence of the pop song in one line. Their sound evokes the Partridge Family, without the family. Spreading awareness of various charities on their website, they are aligned with the spirit of bands coming out of the region in the '60s. Co-headliner Lights, aka Valerie Anne Poxleitner, wields the keytar and similar instruments in her north-of the border synth-pop hits. Her success has carried her touring schedule into America as well, and her third studio album, Little Machines (Warner Brothers), scores a hat trick, chart-wise, on both sides of the border. Forget the British Invasion, it's the War of 1812 all over again. Let's put up a wall! Lo-fi hip-hop/pop artist K.Flay, touring behind Life As A Dog (Bummer Picnic), opens. (BS) The Complex, 536 W. 100 South, 7 p.m., $22 in advance, $27 day of show, TheComplexSLC.com

Parkway Drive, Miss May I, Thy Art Is Murder, In Hearts Wake

From Byron Bay, New South Wales—one of the metalcore centers of Australia (see Northlane, 50 Lions)—comes Parkway Drive. They rose, much like their predecessors in the '80s, from disillusioned youth playing in tiny venues across their area, revitalizing the almost DIY ethic that has been embraced by the new members of the metalcore scene. Since 2002, they've toured across the world, released five albums, and amassed a number of fans. Their latest album, Ire (Epitaph), is a change from their original sound, with more of a traditional heavy metal vibe, but still retains the essential Parkway Drive qualities: a heavy, chugging sound and angry spirit. They are currently embarking on another tour after success with Ire. Miss May I, Thy Art Is Murder and In Hearts Wake—Parkway Drive's hometown buddies in Bryon Bay—open. (DB) In the Venue, 219 S. 600 West, 7 p.m., $24.50, InTheVenueSLC.com

There's a track on together PANGEA's third album, Badillac (Harvest), called "Sick Shit." There aren't two words more fitting to describe the band's sneering punk. As influenced by '90s grunge and alternative rock as by garage and surf and Pete Seeger, together makes an irresistible, hooky din. Their newest release is the The Phage EP (Burger), produced by Replacements/Guns 'N Roses bassist Tommy Stinson, and it picks up where Badillac left off, and grows from there. First single "Blue Mirror" sounds like something that could've been on Slash Records in the mid-1980s, almost as though they've picked up another influence in X or even the Del Fuegos. White Reaper and Max Pain & the Groovies open. (Randy Harward) Kilby Court, 741 S. 330 West, 7 p.m., $10 in advance, $12 day of show, KilbyCourt.com