Gucci Mane, Metallica, Minus the Bear, and more

THURSDAY 11/29
Gucci Mane, Smokepurpp, Hoodrich Pablo Juan, Asian Doll, Rollxm Joey
You can tell a lot about a rap fan by which version of Gucci Mane they like the best. Pre-jail Gucci? He was always in trouble, banned from venues, beefed with other rappers and lived an irreverent and flamboyant lifestyle that endeared him to fans and peers alike. Post-jail Gucci? He's more buttoned up fashion-wise, he and his wife live "relationship goals" and Gucci's rotund belly has been replaced with a six-pack. In other words, the man born Radric Delantic Davis is living his best life, mane. Whether you like the current version of Mr. Zone 6 or the old one, you can't deny that Gucci has been one of the most consistent and hard-working Southern rappers for more than a decade. His catalog includes 12 studio recordings and more than 50 mixtapes, highlighted by undeniable hit songs like "So Icy," "Freaky Gurl," "I Might Be" and "I Get the Bag." Heightened by beats from the notoriously saucy Zaytoven, Gucci Mane brings the musical stylings of Smokepurpp along for this Unusual Suspects Tour; the SLC stop also features Hoodrich Pablo Juan, Asian Doll and Utah's very own Rollxm Joey of Shah Team fame. It's an all-ages mash-up that older and younger heads can enjoy together. The weather might be cold enough to make you say "brrr," but Gucci is sure to shine some Atlanta sun on any crowd he performs for. Tickets were limited at press time, so act fast. (Keith L. McDonald) The Complex, 536 W. 100 South, 6:30 p.m., $38 presale; $43 day of show, all ages, thecomplexslc.com 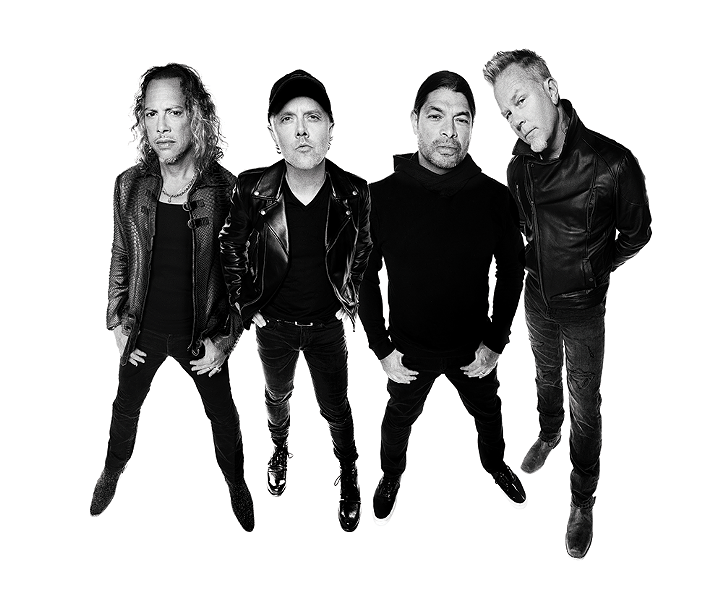 FRIDAY 11/30
Metallica, Jim Breuer
"Home is the road—home is touring," founding Metallica member Lars Ulrich told music journalist David Fricke earlier this month. With more than 37 years on the road and 110 million albums sold, one of the most prominent bands in metal's "big four" has managed to stay together despite getting off to a rocky start. The death of original bassist Cliff Burton was followed by the swift departure of Dave Mustaine once Metallica scored their first real record deal. Influencing everyone from Gojira to Lady Gaga, though, there's no denying the mark that Metallica eventually made on music (for good and bad). Forget the checklist of Grammy Awards, autobiographies and the documentary Some Kind of Monster (where Ulrich and frontman James Hetfield bicker like a married couple), however: There's more to these heroes than world domination. Metallica's volunteer organization All Within My Hands (AWMH) raised $1.3 million for assorted charities at its recent inaugural benefit concert. Named after a track off their St. Anger album, the mission of AWMH is to combat hunger nationwide while supporting community education and workforce training. "It's something that we have created as a platform to help people in other ways than just our music," Kirk Hammett told SF Weekly. Hard to believe that these metal maestros are starting the critical conversation about working with America's food, but volunteerism is a valuable path for metalheads and all Americans alike. In the spirit of the holidays, don't miss Metallica's show at Vivint Smart Home Arena—and then don't miss the chance to go out and give back. Who knows? You might even run into Hammett or Ulrich at the Utah Food Bank. (Rachelle Fernandez) Vivint Smart Home Arena, 301 W. South Temple, 7:30 p.m., $132-$646, vivintarena.com

SATURDAY 12/1
Valentine & The Regard, Amalo, Say Hey
Northern Utah band Valentine & The Regard's extensive discography spans genres. More than 20 albums and singles released since 2014 bounce between bare acoustic guitar paired with singer-songwriter melodies to distressed, jangling guitar rock. The band's characteristically short songs are volatile and experimental, but almost all are characterized by Mike Maurer's probing, melancholy lyrics and lo-fi, fuzzy guitar. Maurer's latest album, Only She Knows/All is Vanity, was released in October. "It's just me and an old nylon string guitar into a cassette recorder and some weird iPhone effects," Maurer says. Songs like "The Whole Family Is Concerned" demonstrate the band's signature ethos, with lyrics that begin, "I'm a nervous kid/ Concerned with what I did/ Please God help me/ I'm broken/ I've stolen everything." Such strife is aided, however, by pleasant strumming and a bit of harmonica, all of which adds up to a warm, atmospheric sound. Maurer started making music when he was 15, and a decade later, he's still at it, now with the addition of his wife Julie Maurer on drums and occasional vocal support (she lends a pop-punk sensibility and spoken-word lyrics to Girlfriends); their friend Collin Jiron also contributes on guitar. Valentine & The Regard releases records on Maurer's label, ForeverKittenRecords, which he also started when he was 15. He's signed several local bands to the label, including Amalo and Say Hey, indie artists who will provide support at this show. It's a ForeverKittenRecords showcase that Maurer says fans of Say Hey shouldn't miss as they've got a special announcement to share. (Naomi Clegg) Kilby Court, 748 W. Kilby Court, 7 p.m., $7, all ages, kilbycourt.com

SUNDAY 12/2
Thou, MJ Guider, 2-Headed Whale, Durian Durian
Louisiana's Thou operate a little differently than most bands. First, they vehemently eschew the sludge metal categorization usually applied to their brand of dense, doom-ridden sonic heft. Each of their full-length albums arrives accompanied by an assortment of EPs; this year, that included separate explorations of drone noise, acoustic folk and grunge rock to build up to the release of Magus, a 75-minute journey through brutal riffs from guitarists Andy Gibbs and Matthew Thudium and psychosomatic lyrics from enigmatic frontman Bryan Funck. Magus' news release describes it as for fans of "alienation, absurdity, boredom, futility, decay, the tyranny of history, the vulgarities of change, awareness as agony [and] reason as disease." Ready to dive in? Thou transcends heavy metal tropes, though, examining such bleak perspectives from an intellectual standpoint of constant engagement with fans, critics and fellow musicians. "Even within a 10-minute Thou song, it's impossible for me to write a completely well-articulated, balanced, nuanced take on these grandiose issues," Funck told Stereogum in August. "It's much easier, and a lot more fun, for me to just take an extreme point of view ... and then take the opposite approach on another song. If you're a well-balanced person, that's just what you deal with in your life: finding that balance between all these different extremes. Thou as a whole is really what's trying to say something, not one song or album by itself. I'd rather the body of work speak to a bigger or more nuanced perspective on life and politics." (Nick McGregor) Diabolical Records, 238 S. Edison St., 8 p.m., $10, all ages, facebook.com/diabolicalslc

WEDNESDAY 12/5
Minus the Bear, Tera Melos
Indie rock bands come and go, but Seattle's Minus the Bear made it 17 long years before announcing this summer their pending dissolution, one last EP (Fair Enough) and a celebratory farewell tour. The journey here wasn't always easy, either. Celebrated in the early 2000s for their spiky, rhythm-rich take on blue-collar Pacific Northwest rock, by 2010 they were derided for taking a turn toward slick, over-produced pop. Of course, electronic elements were always a part of Minus the Bear, all the way back to 2001's debut EP, This Is What I Know About Being Gigantic. Those blips and bloops remained secondary on the 2007 LP Planet of Ice, though, with listeners and critics gently accusing Dave Knudson, Cory Murchy, Alex Rose and Jake Snider of getting stuck in a tired indie-rock rut. Three years later, Omni went for the radio-friendly jugular, dialing down the angular guitar riffs in favor of funk-inspired sheen and Daft Punk-style mainstream saturation. (Do we need to mention that it didn't work?) Still, 2012's Infinity Overhead charted higher than any album in Minus the Bear's storied discography, and Fair Enough feels like a return to early form—and a goodbye wave that brings the band's run to a respectable end. "Sometimes it feels like a natural time to step away," Knudson told Stereogum in July in a joint interview with Snider, who added, "We want to keep the band's legacy intact and go out while we're still doing well." (NM) The Complex, 536 W. 100 South, 8 p.m., $24.50, all ages, thecomplexslc.com

WEDNESDAY 12/5
Conner Youngblood
Conner Youngblood's 2013 single "The Warpath" is a creepy mix of reverb-washed whistling, swells of synthesizer and the sound of a guitar strumming somewhere deep in the woods. Youngblood's soft, subtle voice is stacked in octaves and treated with enough delay to sound hyper-real; the overall effect is simultaneously ambient and intimate, like immersing yourself in a strangely beautiful sound world. That's fairly representative of the Dallas-born, Nashville-based songwriter and multi-instrumentalist's broader body of work, including his full-length debut Cheyenne, which dropped on Counter Records in August. Grounded in folk music, sometimes complete with fingerpicking and mournful lap steel guitar, all the instruments Youngblood plays are layered and manipulated with studio magic to the point where none of them sound of this world. Even acoustic piano is rendered ethereally, the boundaries of the sound made fuzzy and indistinct—not unlike Youngblood's lyrical subjects. For example, the mesmerizing single "Pizza Body" features the refrain, "Oh, you wanna be somebody," but it sounds like he's singing, "Oh, you wanna pizza body." What does it all mean? You've got me. When you dig deeper into the music and pay attention to a particular element, you see that it's the sum of the parts that sounds amazing—astounding, really—evoking complicated emotions that aren't easy to pin down. Youngblood is the rare artist who paints in broad strokes, but still leaves you with an impression of people, places and things that aren't really there. (Howard Hardee) The State Room, 638 S. State, 8 p.m., $19, 21+, thestateroom.com