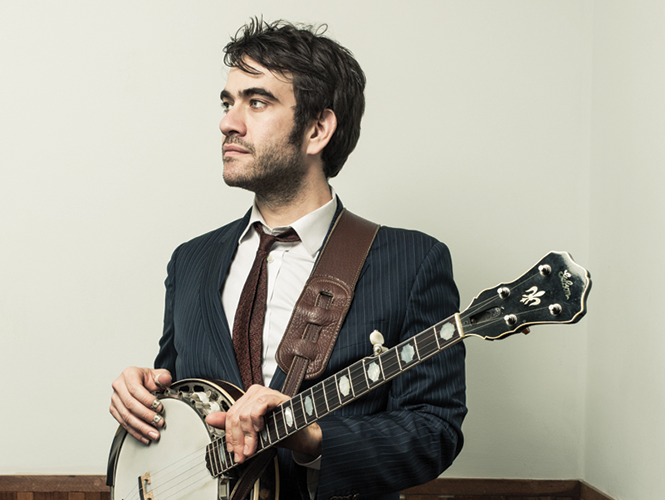 THURSDAY 11/7
Noam Pikelny, Stuart Duncan
If either Noam Pikelny or Stuart Duncan were the sole star of this show, that alone would make it worth seeing. Pikelny, a former member of the jam band Leftover Salmon, currently performs with the progressive nu-grass group Punch Brothers, recent winners of a Grammy for their album All Aboard. And Pikelny is no slacker: Having first started playing banjo at age 8, he's reaped numerous accolades as a solo star, including the Steve Martin Prize for Excellence in Banjo and Bluegrass, a pair of International Bluegrass Music Association Awards for Banjo Player of the Year and Album of the Year for his solo effort Noam Pikelny Plays Kenny Baker Plays Bill Monroe, and two Grammy nominations. As for Duncan, he's played with the Grammy-winning Nashville Bluegrass Band since 1985, and remains a staple of the Music City studio scene thanks to credits that include work with Guy Clark, Robert Plant, Alison Kraus, Emmylou Harris, Reba McEntire, Barbra Streisand, Diana Krall, George Strait and Dolly Parton. As if that's not impressive enough, he's also garnered the title of Academy of Country Music Fiddle Player of the Year in 1996, 1998, 1999, 2001 and 2004, and Specialty Instrument Player of the Year in 2006. Is there any doubt then as to why these two pickers are considered the best at their respective crafts? (Lee Zimmerman) Madsen Recital Hall, Franklin S. Harris Fine Arts Center, 800 E. Campus Drive, 7:30 p.m., $20–$30, all ages, arts.byu.edu

Skizzy Mars, Yoshi Flower, Zaia
After uploading "Douchebag" in 2011 to his Soundcloud as a teenager, Skizzy Mars would continue to chase the spotlight he saw shimmering around his heroes. "I think that every artist's sound is a replication of what they heard growing up," Mars told Village Voice in 2015. "My Tupac and Biggie were Kid Cudi and Kanye West." With his summer release, Free Skizzy Mars, along with his now two studio albums (plus several EPs and mixtapes), Skizzy is definitely closer to a Kid Cudi than a Kanye in sound—but that sound still feels couched in the needy arrogance that created "Douchebag," the kind of lyric and delivery that has always made him ideal frat rap. "They say nice guys finish last/ Well, thank God I'm a douchebag ... But I'm yearning for some substance like a fein up at the rehab/ But I also love giving these feminists reasons to be mad." Nine years later, "All the Time" from the newest album is a collaboration with his touring act, Yoshi Flower, and it's probably the best on the album. With its acoustic backbone, the song brings out the best in Yoshi and Skizzy alike. Honestly, though, the most interesting artist on this tour is the young 20-something Zaia, hailing from Atlanta with a new EP, Reset, that's experimental, funky and even a little industrial. Zaia has the benefit of a young career, of coming up in an age of rap that is more concerned with self-awareness, but it's undeniably refreshing compared to his headliners. (Parker S. Mortensen) The Complex, 536 W. 100 South, 8 p.m. $20-79, 21+, thecomplexslc.com 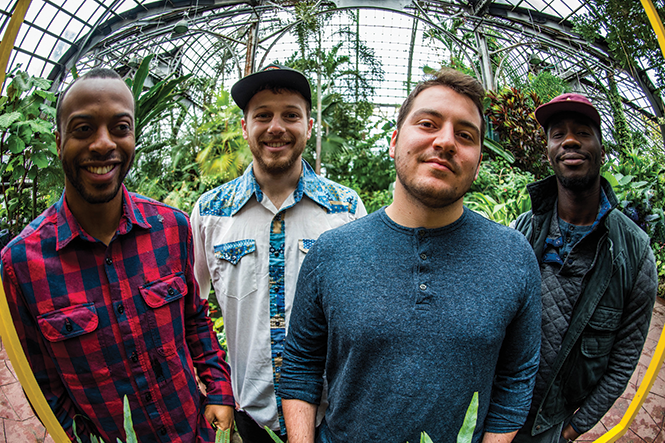 SATURDAY 11/9
Tauk, Dirty Revival
Tauk's music is like if you injected a jam band with a shot of synth and progressive rock. Real Tauk, Vol 3. is the band's third live album, and a perfect way to get a sense of what this show will probably be like: a series of ebbing and flowing through guitar riffs and jazzy interstitials, the kind of music you could easily sway to for hours on a beach in Mexico as the sound echoes across night waves, its organs and synth noise electrifying the crowd. Although at the end of the day, Tauk isn't the flavor of jam band for the Phish-heads out there, the comparison is hard to deny. The ingredients are all there, plus more. It's only stranger, then, to see Tauk with Dirty Revival, a seven piece soul/rock band from Portland. Sarah Clarke's vocals give Dirty Revival an embodied stage presence absent in Tauk—it's raucous and quick, in some ways the furthest thing from the jam-band lineage, and in some ways an ideal complement. I recommend listening to their cover of Nine Inch Nails' "Closer" for a sense of their approach to their original music. The dynamism between blanket anthems and soulful specificity makes Dirty Revival difficult to pin down in words. "Lay Me Down," from their 2015 eponymous album, shows the band's capacity for a cinematic feel, a quality they share with Tauk. All in all, both bands have a lot to offer in a live setting, even in their moments of high contrast. (PSM) The State Room, 638 S. State, 8:30 p.m., $20, 21+, thestateroompresents.com

SUNDAY 11/10
Dangus Kong, Tabernacle Funk Orchestra, Courtney Lane, Sunnyside Avenue
Even with how divided our nation is these days, I don't think it's a controversial statement to say that funk music is just flat-out awesome. The loose, soulful blend of crisp, clean guitar, thumping slap-bass and swaggering horn sections gave us some of the best music of the '70s, and the pop world is certainly poorer for the dilution of funk into synth-pop and contemporary R&B at the end of the 20th century. Still, funk has never gone away entirely; even today, there are bands like Dangus Kong who call back to '70s-era greats like Stevie Wonder and George Clinton. The SLC-based collective might be steeped in classic funk and R&B, but they bring plenty of their own flavors to the table, too, adding psychedelic, blues and jam-band influences, as well as plenty of jazzy complexity (several members have studied jazz at the University of Utah). They also clearly understand the importance of a quality live show for any good funk group, kicking out lively originals like "Pass the Peas" as well as covers of tunes like "Redbone" and "Superstition" and ensuring the audience is engaged for all of it. Dangus Kong takes the stage alongside fellow local acts Tabernacle Funk Orchestra, Sunnyside Avenue and Courtney Lane. (Nic Renshaw) Kilby Court, 741 S. Kilby Court, 5 p.m. $7, all ages, kilbycourt.com 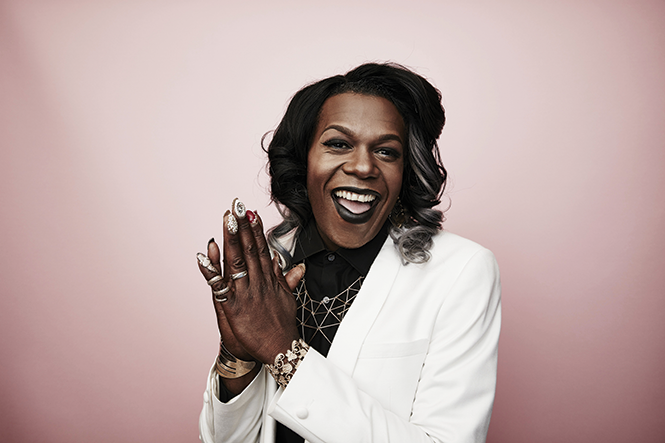 WEDNESDAY 11/13
Big Freedia, Low Cut Connie, Kay Bye, London Skies, Mya Dvrsty
Individually, Big Freedia and Low Cut Connie boast live shows full of interactive, participatory energy and irresistible joie de vivre. Big Freedia, the universally regarded Queen of Bounce, translates stylistic New Orleans ass-shaking, pulse-pounding energy to big stages without losing a single twerk-tastic step. Meanwhile, Adam Weiner, frontman of Philly-based soul 'n' roll outfit Low Cut Connie, stomps and shouts atop his honky-tonk piano, infusing old-school blues with sizzling funk and rootsy jangle. Touring together on an "Azz Across America" junket, this sweat-drenched two-fer could spontaneously combust at any moment—just after Freedia leads the crowd in her holler-and-response communal twerking session, perhaps, or when Weiner hugs and humps his piano, somehow mixing glam-rock insanity with Motown and Stax-era instrumental magic. As Weiner said in a news release about the tour, "Asses will be shook and hearts will be melted. These will be wild, uplifting shows for all the boys and girls. These are intense times in the USA. Me and Freedia [want to] bring together all kinds of people, shake them up and uplift them. Feeling joy together is an audacious response to chaos and disharmony." True to her no-nonsense New Orleans roots, Freedia had just one line to add: "Fans better be ready for some wild shit." Bring an extra shirt, drink plenty of water, and don't be afraid to dance when Big Freedia and Low Cut Connie take the stage. (Nick McGregor) Metro Music Hall, 615 W. 100 South, 9 p.m., $25, 21+, metromusichall.com