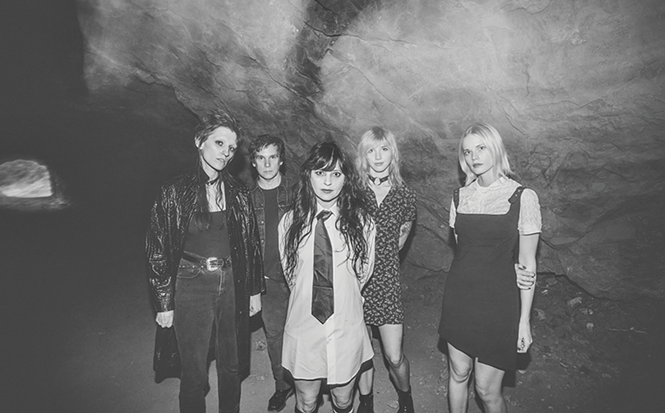 THURSDAY 11/8
Death Valley Girls, Gymshorts, Brain Bagz
The video for Death Valley Girls' new single "Disaster (Is What We're After)" is a straight-on shot of Iggy Pop eating fast food out of a paper bag. There are a couple of weird touches: Iggy folds his burger in half and dips it in ketchup, for one. (Seriously, who does that?) More surprisingly, he keeps his shirt on for nearly four minutes. Just so we don't trip over ourselves searching for symbolism, he gruffly declares, "I'm Iggy Pop, and I just ate a burger listening to Death Valley Girls." It pays homage to a scene in Danish filmmaker Jørgen Leth's 1982 film, 66 Scenes of America, in which Andy Warhol (surprise!) eats a hamburger. If nothing else, the video illuminates the space along the musical spectrum that Death Valley Girls occupies: sufficiently rough around the edges to capture the attention of a rock 'n' roll OG like Iggy Pop, but enough of an art school vibe to reference Warhol. The L.A.-based outfit is often described as "witch-rock," probably because frontwoman Bonnie Bloomgarden's exaggerated, almost theatrical vibrato is positively chilling. Plus, she writes lyrics about eating brains ("Unzip Your Forehead"). Death Valley Girls' sound is very much based in punk rock, with chugging power chords and scuzzy guitar freak-outs galore, but there's a goofy B-52s spirit somewhere in there, too. Death Valley Girls tours in support of new album Darkness Rains with support from Gymshorts and locals Brain Bagz. (Howard Hardee) The Urban Lounge, 241 S. 500 East, 8 p.m., 21+, $10 presale; $12 day of show, theurbanloungeslc.com

FRIDAY 11/9
The Travelin' McCourys, Larry Keel
It's one thing to tap tradition and still remain relevant; it's another to heed one's heritage and still maintain an individual identity. So credit The Travelin' McCourys with finding a common thread that links past with present. Ronnie and Rob McCoury were weaned on the bluegrass sound championed by their dad, the legendary Del McCoury, and they retain that bond and birthright with the music they make today. Synergy endures, and though they still stick with their status as their father's backing band, they also tour under their own aegis with The Travelin' McCourys band in tow. With Ronnie on mandolin and Rob playing banjo, the brothers merge bluegrass fundamentals with an exhilarating energy that affirms contemporary credence. Not that it was easy—although they began their performing career playing with daddy Del while still in their teens, they eventually came to realize that at some future point their father would retire and they'd need to establish an identity of their own. "We had to figure out something we could do, while still performing with my dad," they say in a news release. "We don't want this to be the Del-less McCoury Band." As a result, they travel in dual directions, one that finds them maintaining the family business while the other affirms a thriving cottage industry of their own. (Lee Zimmerman) The State Room, 638 S. State, 9 p.m., 21+, $32, thestateroom.com 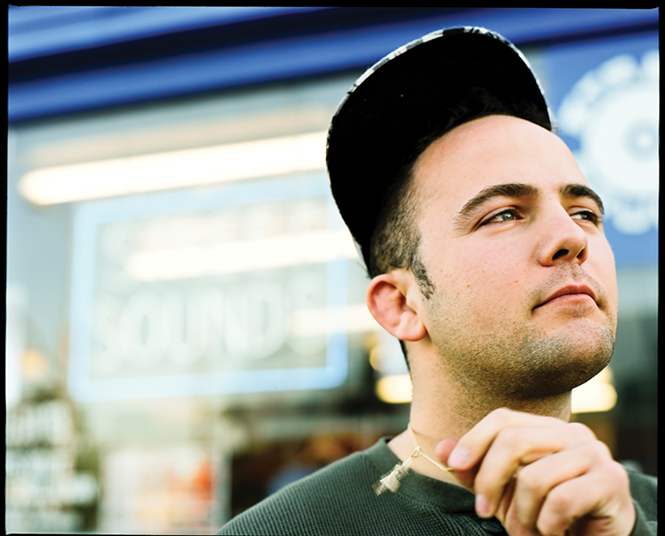 SUNDAY 11/11
Kosha Dillz, Devmo, Stockton
Even as hip-hop splinters into a million different internet-assisted sub-genres, identity still matters. That's particularly true for New Jersey rapper Kosha Dillz, who has built a thriving career embracing his role as a Jewish rapper—"not a rapper who is Jewish," as he's fond of clarifying. That means singing in Hebrew, examining his global responsibility as a dual U.S./Israel citizen, performing improv at synagogues and producing what he called "the most stereotypical Jewish cover" for his debut 2004 album as Kosha Dillz: a matzah ball, with a piece of matzah in the mouth of said matzah ball and a yarmulke on top of the matzah ball.Influenced by his year of incarceration for drug-related charges, the album was heavy on '90s boom-bap beats but treated religion with kid gloves, taking an ironic stance on its creator's Jewish identity. Not so on subsequent records, when Kosha Dillz faced a backlash from booking agents, record companies and fellow rappers, many of whom claimed he was either too Jewish for the secular crowd or not Jewish enough for the religious crowd. "Could anti-Semitism exist in multiple facets?" he mused in a 2016 op-ed for Performer Magazine. "If being locked in a box is so bad, then why do I have all this opportunity?" he continued, listing a litany of recent accolades. Kosha Dillz has emerged as one of the most potent advocates for the Jewish religion—a rhyme-spitting, fire-breathing MC unafraid to talk hard truths and address latent discrimination. In the wake of the largest anti-Semitic mass shooting in U.S. history, attending his show at Kilby Court is a must. (Nick McGregor) Kilby Court, 741 S. Kilby Court, 7 p.m., all ages, $13 presale; $15 day of show, kilbycourt.com

TUESDAY 11/13
Michael Franti, Carl Young, Victoria Canal
Musician, philosopher, advocate, spoken word artist and singer/songwriter Michael Franti has always excelled at any path he blazes. In concert, he's a lively cheerleader of anthemic proportions, galvanizing his audiences with a stirring blend of funk, folk, rock and reggae. As a barefoot troubadour, he's traveled the world with his band Spearhead in tow. But his upcoming visit to Salt Lake City finds Franti cast in a different role: that of a filmmaker with a particularly poignant message of hope, optimism and persistence that's especially needed in today's troubled times. Franti will screen his film Stay Human, a documentary that spotlights individuals in places as far flung as the Philippines and South Africa, all of whom managed to overcome adversity and create a positive experience for themselves and others in the process. Stay Human also offers insights into Franti's own journey, which took him from early childhood challenges to eventual triumph in a quest to make music his life's calling. A Q&A session and acoustic performance will follow the film's screening, offering opportunity not only to learn what it means to stay human when adversity and ignorance enables hate to overpower humanity, but also to spend time with an artist who's fully committed to that cause. Hopefully, that conviction will prove contagious and offer inspiration to others as well. (LZ) Eccles Theater, 131 S. Main, 8 p.m., all ages, $35-$45, live-at-the-eccles.com

TUESDAY 11/13
Rubblebucket, Thick Paint, Tõth
It's something of a miracle that the Brooklyn-based art-pop band Rubblebucket is still around. Primary members Annakalmia Traver and Alex Toth were romantically involved for more than a decade, but they split amid Traver's battle with ovarian cancer and Toth's long-running struggles with alcoholism. Somehow, the couple held Rubblebucket together, continuing their musical partnership focused on forward-thinking dance jams. "Being able to keep that friendship allowed us to keep the musical aspect of our relationship intact," Traver said in an interview with Paste. "And that was always the most fun part anyway." We're all better for it, as well. Rubblebucket has released a steady stream of top-notch neo-psychedelia since 2008 debut Rose's Dream, often incorporating atypical rock instruments such as flute, trumpet and trombone. For new album Sun Machine (Grand Jury Music), Traver said Rubblebucket took pains to add dream-like elements to each song, such as "beautiful arpeggiated synthesizers with magical sprinkles of fairy dust" and the odd spoken-word interlude. On headphones, it makes for a hyper-real experience. Sun Machine is the sort of polished, high-fidelity effort that makes you wonder, "How is this band not famous?" Slow-jamming pop band Thick Paint out of Omaha, Neb., and Tõth (Alex Toth's solo project) go first. (Howard Hardee) The Urban Lounge, 241 S. 500 East, 8 p.m., 21+, $16 presale; $18 day of show, theurbanloungeslc.com

WEDNESDAY 11/14
Claudio Simonetti's Goblin
Halloween lives on, even two weeks after the holiday, when Italian composer Claudio Simonetti and his band, Goblin, perform their famous score for Dario Argento's Suspiria alongside a screening of the 1977 cult film. The supernatural thriller, adapted from Thomas De Quincey's 1845 essay Suspiria de Profundis (Sighs from the Depths), stars Jessica Harper as an American ballet student who transfers to a revered dance academy in Germany but is soon confronted by paranormal goings-on. Now considered a landmark horror flick, Suspiria won several awards—and even inspired a 2018 remake directed by Luca Guadagnino, whose last film Call Me By Your Name was a critical favorite in 2017. The new Suspiria features a soundtrack composed by Thom Yorke of Radiohead, so Simonetti and his Goblin brethren face a tall task taking their own score for Suspiria on the road. But at this seated event, horror takes a back seat to the avant-garde prog-rock that produces emotional intensity and psychic terror. "ForSuspiria, we stayed in the studio for almost three months," Simonetti told Noisey in 2015. "We also experimented with different ethnical instruments like a Greek bouzouki and Indian tabla, and we used a lot of different synthesizers. Suspiria is our masterwork." (NM) Metro Music Hall, 615 W. 100 South, 8 p.m., 21+, $28 presale; $30 doors, metromusichall.com