Khruangbin, The Jesus and Mary Chain, Mild High Club, The Underachievers and more.

THURSDAY 11/2
Chicano Batman, Khruangbin, The Shacks
Chicano Batman, a four-piece outfit from L.A., doesn't downplay their ethnicity, but boldly casts it through a diverse array of genres—a potpourri of style that includes funk, psychedelia and pure, primal rock 'n' roll. Thanks to frequent appearances at Coachella, Bonnaroo, Sasquatch! and the Forecastle Festival, they're festival favorites and a legitimate buzz band with true indie authenticity. Khruangbin convey an equally striking sound, a surreal soundtrack that lacks only the cinematic accompaniment. Fans of traditional Thai folk music, exotic instrumentation, funk and fuzzy surf guitars, this Texas trio—whose name means "engine fly" or "airplane" as translated from Thai—creates an otherworldly psychedelic sound that's both seamless and soaring, flush with all manner of exotic influences. Local favorites The Shacks open the evening by prepping the audience for an intriguing audio adventure. (Lee Zimmerman) Urban Lounge, 241 S. 500 East, 7 p.m., $18 presale; $20 day of show, 21+, theurbanloungeslc.com

The Jesus and Mary Chain, Cold Cave
Even if you weren't hip to The Jesus and Mary Chain's fuzzy, heavy-lidded but clear-headed jangle-rock from the beginning, when they dropped the sublime Psychocandy (Blanco y Negro/WEA, 1985), you've heard them before. Local radio stations KCGL, KJQ and X96 played them plenty. They've landed songs in 31 TV shows and films, including John Hughes' Some Kind of Wonderful, Sofia Coppola's Lost in Translation) and American Horror Story. But no matter how it happens, once you do hear JAMC, you follow them forever. I found them late and didn't see them live until South-by-Southwest 2012, the start of The Scottish alt-rock/post-punk/shoegazers' first real U.S. tour since the late '90s. I couldn't find a cab, so I walked 2 miles on bad feet to The Belmont in Austin. The place was packed. I stood in the back all night but forgot my pain. The crowd was one. Our pulses rose and fell with the music, spiking for "Head On," "Just Like Honey" and (hilariously for me) "The Hardest Walk." Tonight, watching them play hits and new stuff from Damage and Joy (Artificial Plastic), I'll be floating on a cloud—and two pairs of gel insoles. (Randy Harward) The Complex, 536 W. 100 South, 7 p.m., $27.50 presale; $33 day of show, 21+, thecomplexslc.com

SATURDAY 11/4
Mild High Club, Shy Boys, Umbels
Mild High Club is the brainchild of L.A.-by-way-of-Chicago Alexander Brettin. He's made waves in his new hometown with his cohorts in this very punny ensemble. In 2012 he cought the attention of no less than the legendary label Stones Throw Records and its scion, Peanut Butter Wolf. Brettin's Beatlesque psych-synth pop earned them touring spots with King Gizzard and the Lizard Wizard, Allah-las, Youth Lagoon, British post-punk icons Wire and more. Last year's debut full-length, Skiptracing (Stones Throw), shows them adding some touches of jazz to their sound, while their retro keyboards take a page from The Beach Boys. Kansas City indie pop unit Shy Boys is also on the bill, treading much the same ground as Best Coast and Wavves, imminently hummable if not as subtle as the headliners. Local beach-surf-lounge foursome Umbels opens. (Brian Staker) Kilby Court, 741 S. 330 West, 7 p.m., $12 presale; $14 day of show, all ages, kilbycourt.com 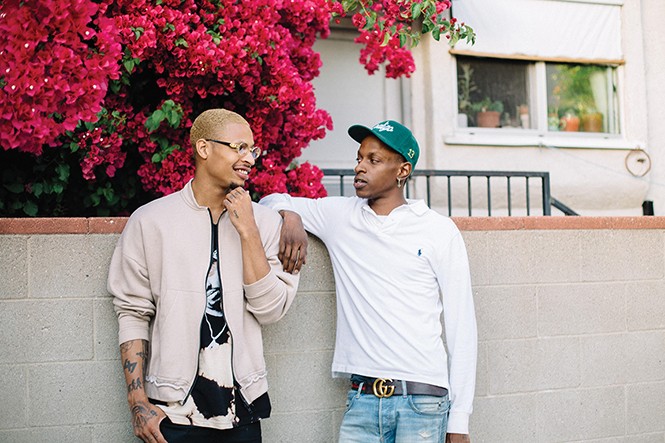 The Underachievers, Injury Reserve, Warm Brew
What do you get when you take a pair of East Coast rap classicists and add dashes of psilocybin and LSD? The Underachievers. The Brooklyn duo—composed by rappers Akthesavior and Issa Gold—references hip-hop's Golden Age with music that dissects social injustices like police brutality and gets people moving on the dance floor. Gold, especially, is open about the influence of psychedelic drugs on his music and his life. In the duo's 2015 single "Star Signs," he raps, "A young teen/ depressed and my mind stressed/ Had no dreams/ at best, was tryna find death/ Seemed like the only solution/ to make my mind rest." The duo is often characterized as psych-rap, and not just because of their affinity for 'shrooms. They've collaborated with fellow ball-trippers Portugal. The Man (see "Amorphous"), sampled the Rolling Stones' 1969 anthem "Gimme Shelter" ("The Proclamation") and generally favor trippy effects, doomsday synthesizers, eerie piano hooks and beats that knock super hard. Add back-and-forth, catch-me-if-you-can flows between two tip-top MCs, and you've got some undeniably dope modern rap in your headphones. (Howard Hardee) The Complex, 536 W. 100 South, 7 p.m., $20 presale; $25 day of show, all ages, thecomplexslc.com

TUESDAY 11/7
Alejandro Escovedo, Kris Gruen
Tunesmith Alejandro Escovedo, 66, belongs to musical royalty—a family that includes brothers Coke, Pete (both of Santana and Azteca), Javier (of Latino punks The Zeros) and Mario (of glam punks The Dragons), along with his niece Sheila E., the former Prince protégé who is now a certified superstar in her own right. Alejandro himself assumed a central role in the emerging Austin music scene of the '80s and '90s, helping to found such seminal outfits as first-wave punks The Nuns, and the roots rock acts Rank and File and the True Believers (with Javier as well as Jon Dee Graham) before going solo some 25 years ago. His bout with hepatitis C almost killed him, and led to a 2004 fundraiser/tribute album Por Vida: A Tribute to the Songs of Alejandro Escovedo, produced by- and featuring the Velvet Underground's John Cale, as well as The Jayhawks, Ian Hunter, Steve Earle, Lucinda Williams and more. Happily, he's since released five more critically acclaimed studio albums, including his 12th and most recent, Burn Something Beautiful (Fantasy, 2016), which shows that Escovedo remains energized and inspired. (Lee Zimmerman) The State Room, 638 S. State, 8 p.m., $30, 21+, thestateroomslc.com

WEDNESDAY 11/8
Vintage Trouble, Desi Valentine
About 14 months ago, Vintage Trouble performed at Usana with Dixie Chicks. Despite being famously non-conformist, the Chicks still don't seem like the type of act that'd pair well with a kickass rock 'n' soul band that can blow just about anyone off the stage. Why anyone would follow the Venice Beach quartet is baffling. Frontman Ty Taylor has the voice of a god and more kinetic energy than the asteroid that'll someday obliterate this planet. Guitarist Nalle Colt, bassist Rick Barrio Dill and drummer Richard Danielson play with as much fire, which would be frightening if it wasn't so fucking beautiful. Onstage or on record, they channel every type of soul from Motown to Stax to Daptone through a Van Halen filter, in songs that are explosions of passion and pomp. That's why acts like the Rolling Stones, AC/DC and The Who keep giving them support slots on their tours—VT embodies everything great about music. It won't be long before they're giving boosts to their own successors, so take this chance to see them in a smaller venue while you can. (RH) State Room, 638 S. State, 8 p.m., $32, 21+, thestateroomslc.com