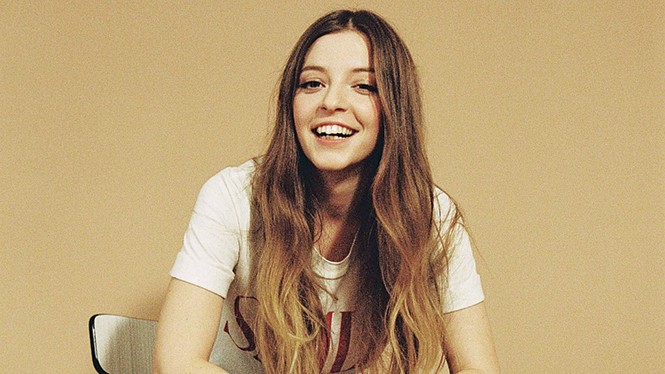 THURSDAY 10/10
Jade Bird, Flyte
They say there's no such thing as an overnight success, but Jade Bird is currently in the process of proving to be an exception. She's taken the Americana crowd by storm—which is all the more impressive considering the fact that she hails from the U.K., proving that Americana is a state of mind. Aside from the fact that she competed for the title of Best Emerging Talent at this year's AmericanaFest, she's also attracted attention from NPR's All Things Considered, The New York Times, Billboard, Rolling Stone, the BBC, Late Night With Seth Meyers and innumerable other tastemakers who have proclaimed her one of the year's most essential artists to watch. She's also toured with high-profile headliners, including Jason Isbell, Hozier and Father John Misty. Her appearance at the Newport Folk Festival elevated her profile even further, thanks to her inclusion in Brandi Carlile's Girls Just Wanna Weekend—a festival made up of female artists only—alongside Dolly Parton, Linda Perry and Carlile herself. Her self-titled debut album, released last April, amplified the buzz garnered by her earlier EP, tellingly titled Something American, and provided early indication that indeed Bird is quickly winging her way forward. She combines intuition and insight, effectively exploring the depth of her own emotions from a highly thoughtful and evocative perspective. More than likely, we'll see her soaring for quite some time to come. (Lee Zimmerman) The Urban Lounge, 241 S. 500 East, 9 p.m., $16-$75, 21+, theurbanloungeslc.com 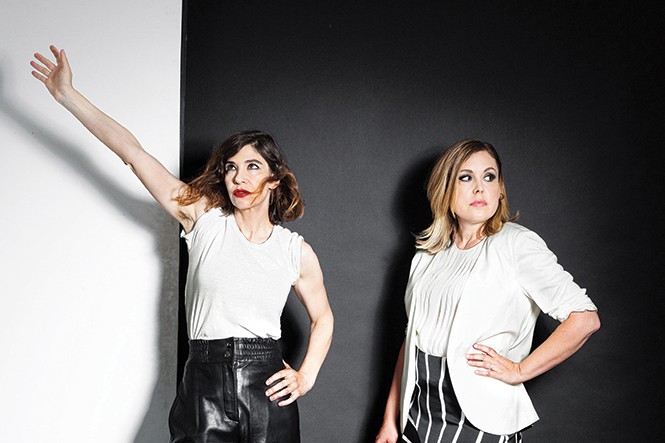 SATURDAY 10/12
Sleater-Kinney
The group that transitioned and evolved riot grrrl punk into the 21st century is back with their ninth album, The Center Won't Hold. Although they've now lost a significant part of their band (longstanding drummer Janet Weiss left the band earlier this year, though the record still features her work), Sleater-Kinney have gained clarity in their collaboration with Annie Clark, aka St. Vincent. Clark produced Center and refocused the group's strengths and goals—Corin Tucker and Carrie Brownstein told The New York Times earlier this year that Clark pushed the group to change their key, to lead with Brownstein's guitar and to speak to the story of Sleater-Kinney itself in the lyrics. The new album feels crisp for those reasons; it's been 25 years since Sleater-Kinney emerged, so a shakeup was probably inevitable, but the new production hasn't erased the bright, demanding ethos where the band has always planted a flag. There are no immediate classics like The Woods' (2005) "Modern Girl" or "Jumpers," but those songs have also had the benefit of almost 15 years. Still, a song like "Love," an anthem for surviving the nomadic indie rock lifestyle, jumps out as relevant to not just contemporary indie music, but to the struggle of making the emotional and material ends of contemporary life meet. Brownstein and Tucker will tour without Weiss, but Angie Boylan of Aye Nako and Freezing Cold fill the gap, and the band's tour will surely test the group's ability to make all the new elements sing. (Parker S. Mortensen) The Depot, 13 N. 400 West, 7 p.m., $37.55, all ages, depotslc.com 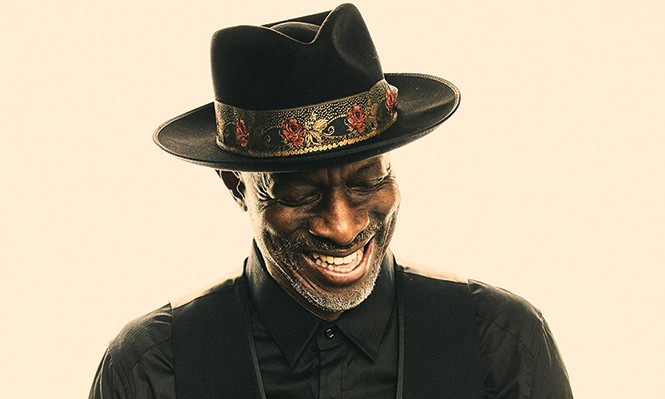 SATURDAY 10/12
Keb' Mo', Alicia Michilli
Kevin Moore might be best known for his down-home, approachably modern take on classic Mississippi blues, but his career has shown him to be much more versatile than that. Moore—professionally known as Keb' Mo'—has worked a wide variety of odd jobs in his four decades in the music industry: playing on Papa John Creach's solo albums in the early '70s; arranging demos for A&M Records; appearing in the stage musical Spunk; and co-writing songs with Buddy Guy and the Dixie Chicks. At first blush, Keb' Mo's solo output might seem pretty pedestrian, but close listening reveals shades of jazz, country, pop and gospel, all giving his traditionalist bluesmanship a surprisingly complex sonic palette. He's also managed to stay more-or-less relevant across his career due to his prodigious appetite for collaboration, most notably with Martin Scorsese on his The Blues documentary series, and most recently with fellow bluesman Taj Mahal on the Grammy-nominated TajMo album. Keb' Mo' is currently touring in celebration of the 25th anniversary of his self-titled debut album, and stops by the Eccles Theater on Oct. 12. Detroit soul singer Alicia Michilli opens. (Nic Renshaw) Eccles Theater, 131 S. Main, 8 p.m., $30-149, all ages, artsaltlake.org

MONDAY 10/14
Black Pumas, Neal Francis
In the 1960s, funk emerged as a fusion of jazz, R&B, soul and rock 'n' roll, updating art forms pioneered by African-Americans for the grittier second half of the 20th century. Funk eventually evolved, birthing new genres like disco and hip-hop, but the genre's visceral slap and body-shaking thump still retains its power of shock and awe. Austin, Texas, band Black Pumas put an even fresher spin on things, releasing their self-titled debut album in June while earning praise as "the breakout band of 2019" (NPR) and "Wu-Tang Clan meets James Brown" (KRCW). Those descriptions don't do justice to the raw intensity of frontman Eric Burton, who came up busking on the West Coast before landing in Texas, and the instrumental chops of guitarist-producer Adrian Quesada, who helped bridge the gap between Latin rock, funk and orchestrated symphonies in his other bands Grupo Fantasma and Brownout. The two lead a back-cracking band that captures a particularly psychedelic slice of today's distorted American reality; "Black Moon Rising" takes equal inspiration from the swamp rock of Creedence Clearwater revival and '70s horror movies, while "Fire" and "Stay Gold" warp the lines between introspective cinematic majesty a la RZA and Danger Mouse. Blending creative references like that with an electrifying stage show that wowed Austin's persnickety music critics, Black Pumas are now positioned to take the nation by storm. Quesada told the Austin Chronicle of their first recording session, "Honestly, right away I knew, 'OK, this is going to be something.'"(Nick McGregor) The State Room, 638 S. State, 8 p.m., $19, 21+, thestateroompresents.com

MONDAY 10/14
Todd Snider, Ramblin' Jack Elliott
Todd Snider is a hoot, and he boasts the sort of irascible, irreverent attitude one would expect from an insurgent singer-songwriter in troubled times. His latest album, Cash Cabin Session Vol. 3, seems to find him in a more repentant mood, and also indulging in a little folk finesse. But the fact that it's titled Vol. 3 is a joke in itself, given the fact there's never been a Vol. 1 or 2. It's that askew approach, combined with a reverence for his roots, that makes Snider such an interesting guy. Still, it's hard to take him too seriously, especially since he repeatedly strays left of center and never seems at a loss for a sneer, cynicism or sarcasm. That's not surprising, considering that he was mentored by some mirthful masters. He was discovered by Keith Sykes, a member of Jimmy Buffett's Coral Reefer Band, who cautioned him never to take himself too seriously. A stint on John Prine's Oh Boy record label helped instill a decided sense of independence. Indeed, he's always been left to record the kind of records he wants to make, and even when his efforts go astray, they're still worth a chuckle or two. The fact that he's appearing with veteran singer and storyteller Ramblin' Jack Elliott ought to add some anecdotal interest and provide an evening of tall tales, pointed punchlines and, of course, Americana music of a vintage variety. What could be better than two resourceful road warriors sharing their gift of gab? (LZ) The Commonwealth Room, 195 W. 2100 South, 8 p.m., $35–$72, 21+, thecommonwealthroom.com

TUESDAY 10/15
Gwar, Sacred Reich, Toxic Holocaust, Against the Grain
What is Gwar? Well, the boring answer is that they're the principal export of Slave Pit Inc., a Virginian art collective who have been making music, comics and films for the past 35 years. The more interesting answer is that they're a gang of intergalactic miscreants who were exiled to Earth 3 million years ago, copulated with apes to create the human race, and have since rampaged against their lowly offspring by being the most outlandishly violent, depraved metal band of all time, releasing 13 studio records of disgusting, hilariously over-the-top shock rock satirizing the metal community and the world beyond. Gwar's live show is equal parts traditional rock concert and interactive stage musical, with band members battling animatronic dinosaurs, "feeding" audience members into giant meat grinders and spraying cheering crowds with facsimiles of just about every bodily fluid you can think of. The group's future was cast into doubt in 2014 with the death of frontman Dave Brockie and the subsequent retirement of his character Oderus Urungus, but the remaining members don't seem ready to stop shocking and thrilling audiences across the world anytime soon, in keeping with Brockie's desire to "Keep Gwar going for 1,000 years." Gwar comes to The Depot joined by fellow thrash stalwarts Sacred Reich and Toxic Holocaust. Detroit rockers Against the Grain open. (Nic Renshaw) The Depot, 13 N. 400 West, 6:30 p.m., $33-$35, 21+, depotslc.com