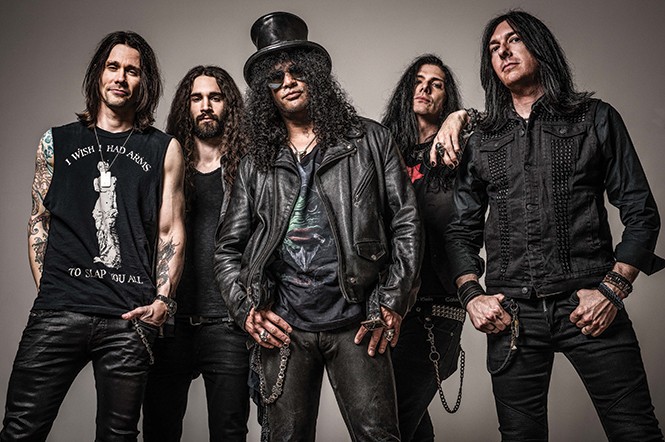 Slash featuring Myles Kennedy & the Conspirators, RavenEye
Slash has done alright for himself since Axl Rose took Guns 'N Roses for himself, doncha think? Sure, he got off to a bumpy start with his first solo band, Slash's Snakepit—which was decent, with flickers of brilliance. But then he climbed back to the top of the heap with Velvet Revolver, and survived that band's implosion to go on to this current project, which just released its third album, World on Fire (Dik Hayd International). To the credit of both Slash and vocalist Kennedy—perhaps familiar as the frontdude of The Mayfield Four and Alter Bridge—this project isn't just a vehicle for Slash's back catalog. Rather, they weave those songs in among their original material without sounding like a disjointed revue. English blues-rock power trio RavenEye opens. (Randy Harward) The Depot, 400 W. South Temple, 8 p.m., $40 in advance, $45 day of show, DepotSLC.com

William Fitzsimmons
The bard William Fitzsimmons' spring 2015 release, a seven-song EP titled Pittsburgh (Nettwerk), is a tribute to the city he was born in, as well as his now-deceased grandmother. It's as sorrowful and sweet as previous records, but this one—which he wrote and produced solo—was 10 years in the making. Fittingly, he'll play a stripped-down and acoustic set tonight. To prepare for the emotional trip your soul will take, check out his version of The Smiths' "Please, Please, Please Let Me Get What I Want," which is somehow even more emotionally tormented than the original. Jake Phillips opens. (Tiffany Frandsen) The State Room, 638 S. State, 8 p.m., $23, TheStateRoom.com

The Legend of Zelda: Symphony of the Goddesses—Master Quest
Zelda fans: What would you pay to see a montage of gameplay footage, set to music from the games, performed by a live symphony orchestra? I know one guy who'd gladly fork over all his rupees, force gems and ore chunks to see this third installment of the symphony series based on the beloved series of Nintendo games. This four-movement, 2 1/2 hour symphony promises content from seven different Zelda titles, including: A Link Between Worlds, Ocarina of Time, The Wind Walker, Twilight Princess, A Link to the Past, Link's Awakening and Spirit Tracks plus new music from the upcoming remake of The Legend of Zelda: Majora's Mask. You shall ... consume ... everything! (Randy Harward) Abravanel Hall, 123 S. Temple, 8 p.m., $69, ArtTix.com 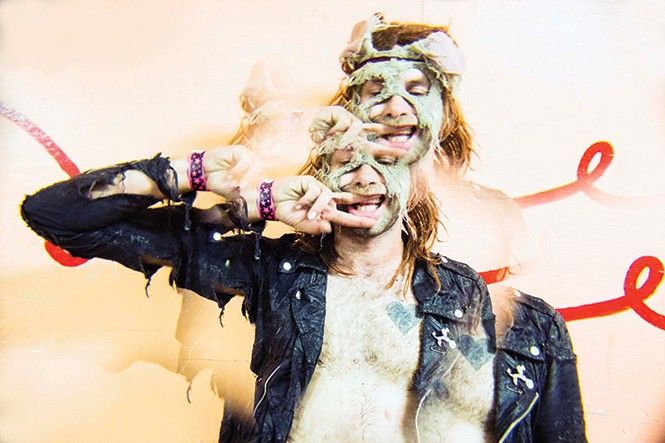 Nobunny, The Nods & Breakers
His friends call him Justin (Champlin). The rest of us mere mortals refer to the dude as Nobunny. The goofy garage-rockin' one-man band wears a freaky bunny mask—and sometimes not much more—and cuddles with creepy, adult-size mannequins with baby heads (see "Gone for Good" on YouTube). He's been releasing records since the mid-2000s on a variety of labels. Nobunny's most recent release, Secret Songs (Goner, 2013), is a total gas, nodding to the Ramones, the Cramps, and even Bob Log III. Imagine the most fun you've ever had at a gig and multiply it by, say, seven. That's what you're in for tonight: seven times fun. (Tim Hinley) Kilby Court, 741 S. 330 West, 7 p.m., $10 in advance, $12 day of show, KilbyCourt.com

Shook Twins
Twin sisters and musical prodigies Katelyn and Laurie Shook emerged from Sandpoint, Idaho, in the early 2000s and soon found their musical identity firmly established, releasing their first album, You Can Have the Rest, in 2008. Shortly afterward, they relocated to Portland, Ore., and chiseled out a unique niche with their quirky folk, complete with unusual musical instruments like glockenspiel, telephone microphone and a huge golden shaker egg. Their use of beatboxing, animal sounds and looping advances the technology of a traditional musical genre on their latest 2014 release, What We Do (Curlypinky). In other words, the Shook Twins are doing something no one else could replicate. Jordan Young opens. (Brian Staker) The State Room, 638 S. State, 9 p.m., $15, TheStateRoom.com

Salad Boys
New Zealand, the other Australia (relax, Salad Boys—joke), isn't exactly known for its musical exports. I mean, you've got Flight of the Conchords, but do comedy acts count? But when something does bubble up from down under the land Down Under, it's good stuff like Tall Dwarfs, Split Enz, The Clean, Garageland, The Naked and Famous, Unknown Mortal Orchestra, the Datsuns—and the Salad Boys. Metalmania (Trouble in Mind), has the most in common with the jangly indie rock of Tall Dwarfs and The Clean. The latter, probably due to influence and experience; the Salad Boys once served as backing band for The Clean's David Kilgour. The group isn't just a bunch of Kilgour acolytes, however. Their memorable, exhilarating songs pull from Hüsker Dü, REM and even My Bloody Valentine for a cocktail of Minneapolis indie rock, jangly Athens college rock and Irish shoegaze that you're gonna love. (Randy Harward) Diabolical Records, 238 S. Edison St., 8 p.m., free, $5 suggested donation, Facebook.com/DiabolicalRecords

Coheed & Cambria
First Kiss ditched the makeup. Then Ozzy pissed away all of his mystery with a reality show. Then Limp Bizkit reunited and nobody held a sawed-off shotgun to Fred Durst's nose and said, "No." Now, post-hardcore/prog quartet Coheed & Cambria—known for heady, technical concept albums with supplemental illustrated reading material—are benching both on The Color Before the Sun (300 Entertainment). Mostly. The chops are there, but this time they're proving they can write an album of great songs. Hardcore fans might carp about it (no fuggin' comic?!), but every tune here is a keeper. So if C&C are bidding to join the mainstream music factory... OK. Thank You Scientist and Silver Snakes open. (Randy Harward) Park City Live, 427 Main St., Park City, 7:30 p.m., $35-$75, ParkCityLive.net 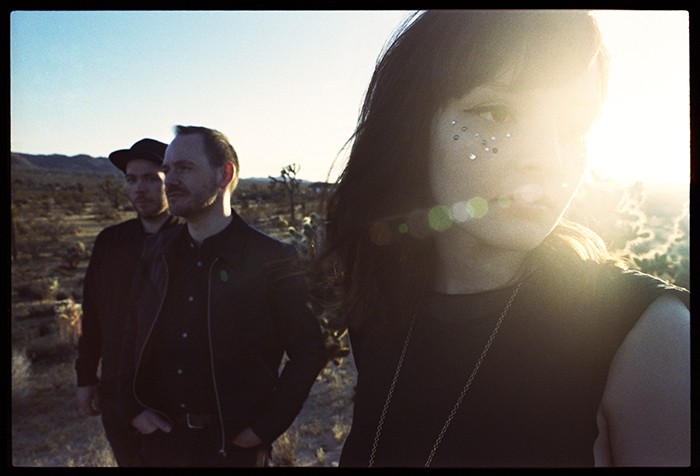 Chvrches
Chvrches has the electropop world in the palms of their hands. Their debut album, The Bones of What You Believe, thrust the Glaswegian trio into the spotlight, as frontwoman Lauren Mayberry's eloquent response to sexism gained her much respect. The band's latest album, Every Open Eye (Glassnote), is a continuation of their unique, distinctive sound, which is the pinnacle of the new trend in synthpop of minimalist techniques and introspective lyrics. Hundreds of shows in the last two years have helped the band build up an even bigger fanbase that still grows at a fantastic pace. Mansionair opens. (Doug Brian) The Complex, 536 W. 100 South, 7 p.m., $25 in advance, $28 day of show, TheComplexSLC.com

Beats Antique, Moon Hooch
Sitting somewhere between club music, film scores and the wacko gypsy sounds of Gogol Bordello, Bay Area experimental electronic trio Beats Antique is unlike anything you've heard before. Hop on YouTube and grab the legal download of their 2014 release A Thousand Faces: Act II (Antique Records) and hear for yourself. (You can stream Act I if you're not into the whole non-sequential thing.) Then look up all four parts of the group's 2015 release, Creature Carnival: Live Denver, CO and Asheville, NC and see that there's as much to see at the show as hear. Openers Moon Hooch, touring behind last year's This Is Cave Music (Hornblow/Palmetto), are likewise sonically and visually interesting—they're a sax-sax-drums power trio that incorporates electronics and stuff like, I dunno, traffic cones in their positively kickass jazz-fusion sound. If you're in the mood for something truly different, get on up the canyon for this show. (Randy Harward) Park City Live, 427 Main St., 9 p.m., $27-60, ParkCityLive.net