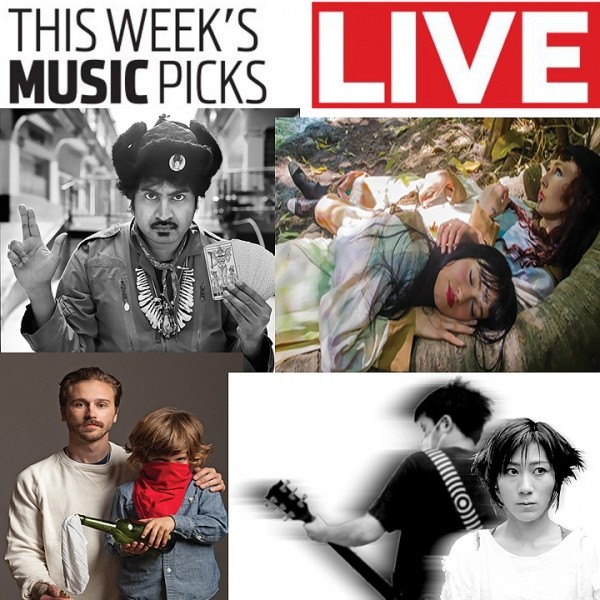 
This month is the first-year anniversary of all-ages venue Shred Shed, and what better way to celebrate than by inviting a ton of bands and throwing a big party? Over three nights, more than 10 touring and local bands will take the stage for Shred Fest, in genres ranging from hip-hop, metal and ska to electro-pop, surf rock and punk. On Thursday, check out Moneypenny, Baby Ghosts, The Wasatch Fault, Posole and The Sinisters. Friday’s lineup is SubRosa, Jetty, Filth Lords, Die Off and Huldra. On Saturday, Muscle Hawk, Giraffula, Dusk One, Dine Krew and Atheist will wrap things up. (Kolbie Stonehocker)
The Shred Shed, 60 E. Exchange Place (360 South), also Oct. 18 & 19, 7 p.m., $6 each night, $14 all three nights

Dark Star Orchestra
Chicago-based Dark Star Orchestra is a Grateful Dead cover band that prides itself on staying true to the original source material. The seven musicians’ shows are based on—to the exact detail—actual concerts that the Grateful Dead performed: They choose their instruments and even where they stand according to the original performance. However, they don’t announce which concert they were re-creating until after the show is finished, so Deadheads can see if they’re able to guess the correct one. You know the covers are good; since the band formed in 1997, some of the original Grateful Dead members have played at their concerts, including Bill Kreutzmann, Bob Weir and Donna Jean Godchaux. (Laurie Reiner)
The Depot, 400 W. South Temple, 9 p.m., $23 in advance, $28 day of the show

King Khan & the Shrines
Montreal-born larger-than-life showman Arish Ahmad Khan, aka King Bama Lama Khan, drew inspiration from highly personal subject matter for psychedelic-soul/garage-punk band King Khan & the Shrines’ new album, Idle No More (Merge), which came out in September and is the band’s first release in six years. In a press release, Khan says the track “Luckiest Man” is about “how lucky I was to receive the proper mental care I needed during a very steep and lengthy plummet into madness.” And “Darkness” is about “the ugly beasts that must be tamed inside of us all.” But in no way is the album—named after the Canadian indigenous-rights movement—a downer; on the contrary, it’s a funky, Technicolor, shake-your-ass tambourine party that recognizes the joyful and, yes, not-so-joyful parts of life, but with a vibe that’s all about celebration. Hell Shovel and Breakers are also on the bill. (Kolbie Stonehocker)
The Urban Lounge, 241 S. 500 East, 8 p.m., $15

The Blow
Electro-pop duo The Blow’s highly anticipated new self-titled album, released Oct. 1, has been a long time coming—it’s been seven years since 2006’s Paper Television—and was worth the wait. Musicians Khaela Maricich and Melissa Dyne decided to team up as The Blow after moving together from Portland, Ore., to New York City in 2008 and, between the two of them, create colorful electronic visions of the understated but catchy variety. Single “Make It Up” is a good example of how a Blow song can seem simple at first—with a decidedly minimal approach—only to surprise with a full, perfectly sweet pop chorus. (Kolbie Stonehocker)
Kilby Court, 741 S. Kilby Court (330 West), 7 p.m., $12 in advance, $14 day of show

Melt-Banana
If you’re prone to seizures, stay the hell away from Japanese noise-rock/grindcore duo Melt-Banana and their latest creation, fetch. The manic chaos that singer Yasuko O and guitarist Agata ignite is nothing short of brain-cell-melting insanity; imagine the soundtrack to a bloody fight to the death between a bunch of neon-colored robots that are powered by rocket fuel and crack. And then amplify that by 100. Tracks like “The Hive” is a fiery rocker with a barrage of double-pedal bass drum and blistering guitar riffs. Opening track “Candy Gun” starts out kind of pretty, then blasts open with a killer bass line and unintelligible lyrics sung by Yasuko’s high-pitched, relentless voice. Melt-Banana is just as energetic in concert, too; at a past show at Kilby Court, their onstage antics included playing a series of 10-second songs in rapid-fire style, and “freezing” in place while crazily moving only their eyeballs. Kinski and Baby Gurl are also on the bill. (Kolbie Stonehocker)
The Urban Lounge, 241 S. 500 East, 8 p.m., $10

CocoRosie
Made up of sister performance artists Sierra and Bianca Casady, polarizing freak-folk duo CocoRosie (the combination of each sister’s respective childhood nickname) creates beautiful tunes that blend sparkling electronica, beat-boxing, strings and diverse improvised instruments, such as wind-up children’s toys. The result is weird and ethereal, as heard on CocoRosie’s recently released fifth album, Tales of a GrassWidow, which they created through collaboration with Icelandic composer Valgeir Sigurdsson. The 11 songs cover a wide range of themes that are usually difficult for society to face, such as the decimation of the Earth and child abuse and exploitation, with lyrics that have a strong storytelling focus. On single “Gravedigress,” Bianca’s throaty, fey voice—which will probably remind listeners of another notable Icelander, BjÃ¶rk—floats and weaves delicately, while a slick hip-hop beat powers the song forward. (Kolbie Stonehocker)
The Depot, 400 W. South Temple, 8 p.m., $18 in advance, $20 day of show

Vandaveer
If October makes you want to take a seat near the fire on a stormy night and enjoy a good murder ballad, Vandaveer’s new album, Oh, Willie, Please … will provide that perfect macabre ambiance. Murder ballads have traditionally been an important piece of America’s musical landscape, especially in country and folk music, and for their new album, Vandaveer holed up in an old house in Lexington, Ky., and put their own spin on many of those public-domain songs. On haunting tunes like the Southern-gothic masterpiece “Pretty Polly,” the core duo of vocalists Mark Charles Heidinger and Rose Guerin collaborated with a full lineup of musicians to create a gorgeous, goosebumps-raising Americana sound, complete with banjo, fiddle and mournful pedal steel. Joe Pug is also on the bill. (Kolbie Stonehocker)
The State Room, 638 S. State, 8 p.m., $12

Flatbush Zombies
Just past Danny Brown on the “I do a lot of drugs and rap about it” spectrum is the Brooklyn-based trio Flatbush Zombies. Over the past two years, the East Coast has experienced the rise of “Beast Coast,” a collective spearheaded by a small group of blog darlings like Joey Bada$$, World’s Fair and A$AP Mob. But the grittiest and hardest emcees of this crew are undoubtedly Meechy Darko and Zombie Juice, of the young and up-and-coming Flatbush Zombies. Despite being a group that’s only 2 years old, the Zombies have found a dark, unique sound that’s somewhat reminiscent of legendary ’90s-era groups like Smif-N-Wessun and M.O.P. This is in part to due to their in-house producer, Erick Arc Elliott, who creates tough, yet haunting backdrops for Juice and Meechy to express their often insane musings on acid, DMT and molly. Bodega Bamz is also on the bill. (Colin Wolf)
The Complex, 536 W. 100 South, 8 p.m., $13 in advance, $15 week of show, $18 day of show