THURSDAY 10.20
True Widow, No Sun
There's a glut of bands in the stoner/doom/sludge web, most of 'em good to great. When they land on the latter end of that spectrum, it's because they do something a little different. Texan trio True Widow puts a twangy, shoegaze-y twist on the monolithic sound, which might seem contradictory—but you know what they say about opposites. The band's newly minted fourth album Avvolgere (Relapse) is more of the same: ethereal male and female vocals (the latter evoking Mazzy Star's Hope Sandoval), big riffs and fuzzy atmospherics—just with a little more stank on it. Sometimes that's all you need. (Randy Haward) Urban Lounge, 241 S. 500 East, 8 p.m., $12 in advance, $14 day of, 21+, TheUrbanLoungeSLC.com

FRIDAY 10.21
Karl Blau, Lake, Andrew Shaw
It was only five months ago when singer-songwriter Karl Blau played at Studio Dada in Provo, promoting an album titled Introducing Karl Blau. I pointed out the irony of the title in a blurb about the show, citing his long résumé of noteworthy indie projects like K Records noise merchants The Microphones, doom-drone purveyors Earth and singer-songwriter Laura Veirs (lately of the incredible singer-songwriter supergroup case/lang/veirs). All that, and his own 33-album solo discography (dude—put out an EP called 1/3, pronto!). So Introducing himself now—with a covers album? Perfect irony. We have so many questions for the guy, but he's been scarce. That's another irony because he's usually so good on the deal, doing his own promo. And, of course, when you're making an introduction, it's customary to, y'know, be present. But all will be forgiven when Blau plays you some of the music you've heard before, and hopefully a bunch that you'll wish you'd already heard. God willing, the merch table's stocked! (Randy Harward) Kilby Court, 741 S. 330 West, 7 p.m., $10, KilbyCourt.com

The Circulars (Album Release), The Nods, Choir Boy
There's a sound in '80s music that already has a name or three—new wave, shoegaze, dream pop. But you could almost call it Hughesadelia, as tribute to the great teen-film auteur John Hughes, who stacked his soundtracks with bands of that ilk. On their eponymous 2013 debut EP and the 2014 full-length Ornamental, Salt Lake City's The Circulars wove gauzy delights from the blueprints of bands like The Jesus and Mary Chain, and The Smiths. The new record, which City Weekly has yet to hear at press time (helloooo ..?), features an entirely new lineup except for co-founder Sam Burton. From what can be learned online, it sounds different, but the same. (RH) The Urban Lounge, 241 S. 500 East, 8 p.m., $5, 21+, TheUrbanLoungeSLC.com

THURSDAY-SATURDAY 10.20-22
Gary Lewis & the Playboys
You gotta wonder if Gary Lewis & the Playboys—looking and sounding clean-cut and 1950s-wholesome, but with a name referencing a magazine that folks in the mid-'60s would've thought signaled the end times—were proto-trolls. It's unlikely, but it's fun to imagine putting something past the morality police at the time. Almost as fun as reaching back to those selfsame simpler times when a good, clean song was also an instrument of backbeat-driven rebellion, but milkshakes and lollipops were milkshakes and lollipops (if you get my drift). And bling wasn't bling, an empty symbol of entitlement, materialism and debt dripping with the blood of slave laborers. But while diamond rings don't shine like they used to, Lewis' biggest hit, "This Diamond Ring," still distills a messy breakup into nice, clean imagery. Which, in more complicated times, is quaintly refreshing. (RH) The Egyptian Theatre, 328 Main, Park City, 8 p.m., $29-$55 ($5 more if purchased within 30 minutes of showtime), EgyptianTheatreCompany.org 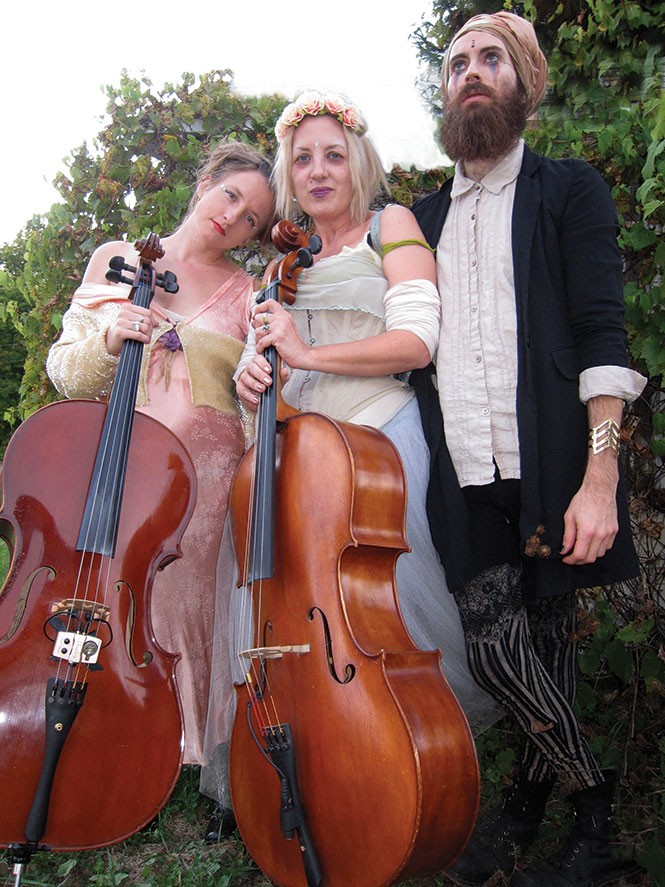 SATURDAY 10.22
Rasputina, Vita and the Woolf
It was during either my first or second trip to Austin, Texas, for the annual South-by-Southwest Festival that I learned about Rasputina. They were playing an in-store at Waterloo Records, where some buzzy singer-songwriter (Norah Jones or something) had also performed that year. As I saw them clad in corsets and tights, I wondered why they weren't collapsing in the hot, humid weather—especially since three out of four members were packing cellos. (This is one instance where the drummer actually had it easy.) The band proceeded to demonstrate how the cello is so much more than a droning, moaning instrument for nerds who haven't learned the joys of a good ol' Fender P-Bass. Granted, SXSW is a friendly climate for new, cool, strange music, but from the looks on everyone's sweaty faces, they'd probably never conceived of such a dynamic sound coming from that many gargantuan violins, buttressed by rock-solid drumming and complemented by Melora Creager's haunting, mellifluous vocals. And then they played a Pat Benatar cover. And here we are, 14 years later, and the band's discography includes seven studio albums, eight EPs, three live records and two compilations. A sorta-new one, titled Ether? You're Welcome, a redux of the band's 1996 debut Thanks for the Ether (Columbia), is due this winter. (RH) O.P. Rockwell, 628 Main, Park City, 7 p.m., $18-$35, OPRockwell.com

MONDAY 10.24
Tool, 3Teeth
One of the best things about Tool is that they're the type of band that, some say, appeals to tools. You know, the dim, closeted, double-Y chromosome set. The guys for whom "Prison Sex" (Undertow, 1993) is, on those tipsy late nights, kinda romantic—but they'd never tell the bros. The ones who prefer the LCD-comedy of Kevin Hart or Larry the Cable Guy to Bill Hicks' hilarious truth-telling (who, before his death in 1994, befriended Tool singer Maynard James Keenan when both performed at Lollapalooza 1993). The guys who can't fathom the complexity and nuances of the band's signature variety of prog-metal. The guys who'd rather have another Bud Light Lime than check out Keenan's wines—much less even consider sitting through a documentary about them (the hilarious Blood into Wine, 2010). The guys who'll go to this show to be cool, who have no idea what Keenan et al. have been up to over the past decade (Puscifer, people! Pusc-i-fer!). You know, the 10 years where Tool refused to release new music until they'd resolved their legal dispute with their former label. And then there are the real fans—the ones who get it— who will come to see Tool's highly satisfying A/V spectacle, and who wait with bated breath for the band's long-awaited new album, which will be as edifying as it is entertaining. And expensive—but, more than many overpriced arena shows, worth it. (RH) Maverik Center, 3200 S. Decker Lake Drive, 7:30 p.m., $72.50-$92.50, MaverikCenter.com

WEDNESDAY 10.26
The Meditations
Sometimes, being a white dude is embarrassing. Like when you're seduced by the musicality of a foreign accent—in this case, the Jamaican one. It's just that "mon" is so much more resonant and laid-back than a nasal, honking "man." Or the "-tion" suffix, as in "72-hour liquida-SHON" or scintillating conversaSHON, mon. To be fair, ragin' Cajun Justin WilSON's verSHON is almost as fun, but you know. As for the Meditations (See? Now you're doin' it, sans phonetics. You're welcome.), they've been around since 1974 when the core trio of Danny Clarke, Winston Watson and Ansel Cridland got together, releasing singles attributed to individual members until 1976, when they dropped the single "Woman Is Like a Shadow," leading to their first album Message From The Meditations (1977). In the ensuing 40 years, the band's sweet harmonies and sunny songs made them one of roots reggae's finest, if not commercially successful, acts. Only Cridland remains in the current lineup, but when you're standing in front of the band, and they make you forget that about the chilly fall weather outside, you won't care. (RH) The State Room, 638 S. State, 8 p.m., $17, 21+, TheStateRoomSLC.com