THURSDAY 10/25
Amanda Miguel and Diego Verdaguer
When two Latin superstars appear together in concert, it's a special occasion. However, many Americans might be unaware of the romantic notions ingrained in the style and sound of Amanda Miguel and Diego Verdaguer. Bob Dylan once sang, "Spanish is the loving tongue," but sadly, our overall affinity in the U.S. for anything that comes from south of the border appears to be at an all-time low. Blame anti-immigrant sentiment and Donald Trump's desire to build that wall—and then thank Miguel and Verdaguer for helping to restore our Pan-American cultural connection. With a recording career that dates back more than 35 years, the Argentinian-born, California-based Miguel taps into the tender traditions of South America while bringing her own expressive singing style to the fore. Her husband, Verdaguer, was already an established star when the two first met, but when Miguel joined his group Mediterráneo, their musical bond deepened. Verdaguer, also from Argentina, plays trumpet and bandoneón, a kind of concertina, and boasts a deep catalog full of hits such as "Corazón de Papel," "Usted Que Haría" and "La Ladrona." Verdaguer's biggest hit, however, came in 2009 with "Voy a Conquistarte"—translated into English, that means, "I'm going to conquer you." Hopefully these two prove that point by winning over their audience. (Lee Zimmerman) The Depot, 13 N. 400 West, 7 p.m., $45 presale; $55 day of show, 21+, thedepotslc.com 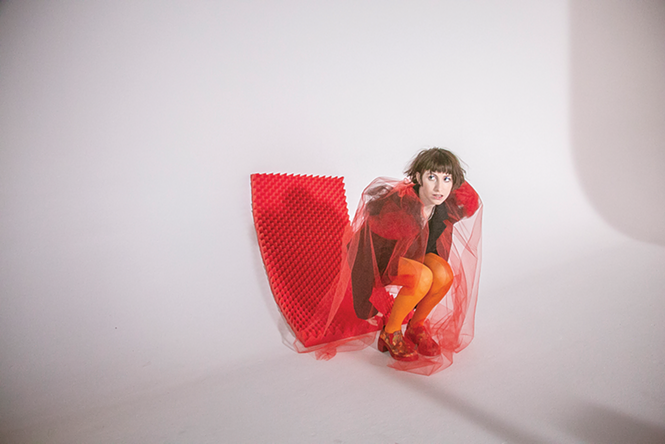 FRIDAY 10/26
Ian Sweet, Young Jesus, Head Portals
Performing as Ian Sweet, Jillian Medford makes introspective indie pop with an emotionally rich core. On her second album,CrushCrusher, she analyzes issues increasingly relevant to young women today: the importance of self-esteem, the impact of living an idealized Instagram-worthy life and the responsibility that comes with serving as a caretaker for friends, family and romantic partners. Addressing her own anxiety while digging into its root causes, Medford creates a sonic palette of both dissonance and intimacy, shedding the band members she relied on for debut LP Shapeshifter in favor of the solo approach with which she started Ian Sweet. Working with producer and engineer Gabe Wax on Crush Crusher, Medford ended up with a record that mixes psychedelic rock, shoegaze pop and beat-driven trip-hop. Closing track "Your Arms Are Water" sums up the entire project, with Medford tracing a relationship from inspiring start to drowning end, embracing both compassion and imperfection—a necessary defense mechanism in today's grueling world. Arrive early for local band Head Portals and L.A. rockers Young Jesus, who mix the desperation and discovery of emo rock with experimental jazz tendencies on new album The Whole Thing. (Nick McGregor) Kilby Court, 741 S. Kilby Court, 7 p.m., $13 presale; $15 day of show, all ages, kilbycourt.com

SATURDAY 10/27
Danzig, Venom Inc, Mutoid Man, Powertrip
Older millennials always get shit for not "growing up with the music" of pioneers like Prince, Queen and David Bowie. But if the music is good, we will follow. Case in point: legendary New Jersey goth rocker Glenn Danzig. Everyone in Generation X, Y and Z knows his first band, The Misfits, which redefined corpse-painted horror punk with classic songs like "Last Caress" and those skull T-shirts worn by teenagers around the globe. But did you know that The Misfits achieved very little success while they were a band from 1977-83? Or that Danzig pulled the plug on his bandmates because he was frustrated by their lack of ambition? Working first as Samhain and then under his adopted stage name, Danzig teamed up with legendary producer Rick Rubin in 1986 and dropped his first record two years later. That album's lead single, "Mother," is still Danzig's biggest hit, maintaining a place in the musical lexicon long enough to attract fans (myself included) who weren't even born when Danzig was in his prime. But 2018 marks 30 years of leather pants, sweaty hard rock and all-around badass success for Danzig, as the band continues to display its artistic reach on 2017's Black Laden Crown. Danzig will probably never run out of things to write or talk about, developing a reputation for being brutally honest onstage and off. As he told Rolling Stone last year, "I love putting people who are full of shit in check." Still, 2018 was big for Danzig, as his adult comic book company, Verotik, is developing feature films based on its characters, with Danzig in a directing and music-composing role. Younger generation: Now's your chance to experience the old school with Danzig on its 30-year anniversary tour; older generation: Hopefully you'll welcome us with open arms. After all, Glenn Danzig is an artist, and the world is his canvas. (Rachelle Fernandez) The Complex, 536 W. 100 South, 6:30 p.m., $34.50, all ages, thecomplexslc.com 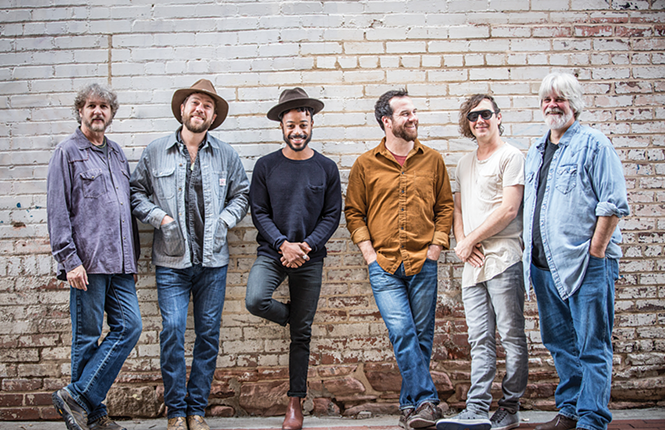 Leftover Salmon
According to Vince Herman—singer, songwriter and longtime staple of Leftover Salmon—his band interprets bluegrass as an updated form of traditional mountain music. That definition implies broader meaning in today's musical arena, where jam band sensibilities mix freely with populist precepts. That's why this Boulder, Colo.-based band has garnered a rabid following of free-spirited music enthusiasts whose avid devotion rivals that of Deadheads during the psychedelic swirl of an earlier era. Indeed, Leftover Salmon's popularity recalls the patchouli and patchwork that defines the very essence of hippie grooves. The band effectively breaks down barriers, transitioning from nü-grass and country to rock and zydeco, a combination that they blithely refer to as "polyethnic Cajun slamgrass." While that seems to imply an odd and eccentric sound, it's really anything but. Leftover Salmon's music is grounded in reliable rhythms and fascinating instrumental interplay, going from rowdy and rambunctious to well-executed and skilfully sown. As an innovative outfit with an international reputation spanning nearly 30 years, and 10 albums drawn from both live and studio performances, Leftover Salmon remain consistent festival favorites, as daring, distinctive and fresh as ever. (LZ) The Commonwealth Room, 195 W. Commonwealth Ave., 9 p.m., $33, 21+, thecommonwealthroom.com 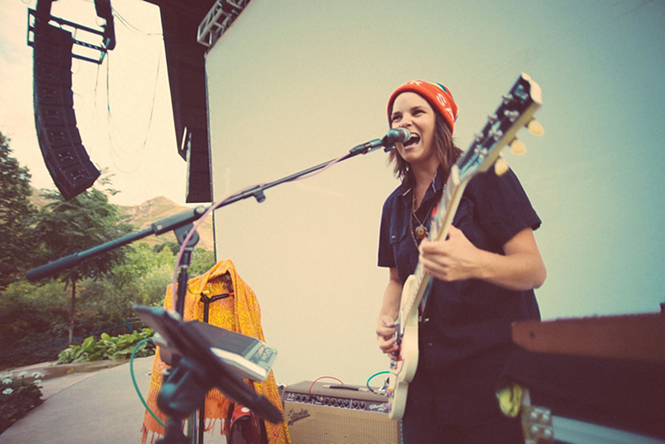 Talia Keys & The Love, Dale James
Local favorites Talia Keys & The Love give your pre-Halloween weekend a retro spook on Saturday with their Mixtape '84 performance. Originally formed in 2015 after her first solo album, Fool's Gold, Keys and her backing band bring high energy and sensitive soul to every show. The band's latest album, April's We're Here, highlights the specific talents of each member, but on a night like this, they'll get to stretch their rock 'n' roll legs by covering some of the most popular grooves from 1984, a year chock-full of big hits by iconic artists like Madonna, Prince, Van Halen, Lionel Richie, Culture Club and Cyndi Lauper. "This is my seventh annual Halloween Bash at The State Room," Keys says. "Every year has been a tribute, [and] this year I wanted to nod to the biggest year in pop music history." In addition to lending her striking vocals to "Let's Hear It for the Boy" and "Dancing in the Dark," Keys and her bandmates spend hours decorating the venue to transform the evening into a true theatrical production. Opener Dale James spins soul and funk on vinyl to get the crowd warmed up. (Kara Rhodes) The State Room, 638 S. State, 9 p.m., $15, 21+, thestateroom.com

WEDNESDAY 10/31
Suffocation, Cattle Decapitation, Krisiun, Visceral Disgorge, Visigoth
No matter how you like your tricks and treats, Halloween parties pop up all over town on this frightful night. But if you want to experience real horror, ditch the hokey props and expensive costumes and enter the pit at this showcase of several death metal icons. New York's Suffocation has etched its name in grindcore history with savage technicality, downtuned guitars and wretched growls from founding lead singer Frank Mullen, who split vocal duties on 2017 album ...Of the Last Light with touring member Kevin Muller and will retire after this final tour. Hearkening back to the band's landmark early work like Effigy of the Forgotten and Pinnacle of Bedlam, Suffocation sticks with its punishing, powerhouse formula, pummelling posers and pretenders into submission no matter who's on the mic. Cattle Decapitation are coming up on a quarter-century of boasting the fiercest name in death metal, while Brazilian trio Krisiun has 28 years in the game thanks to the blood oath taken back in 1990 by its three brothers. Baltimore's Visceral Disgorge and Salt Lake City's Visigoth round out the bill, giving anyone desperate for a true night of terror the perfect Halloween destination. (NM) Metro Music Hall, 615 W. 100 South, 6:30 p.m., $28 presale; $32 day of show, 21+, metromusichall.com