THURSDAY 10/3
Kishi Bashi, Takenobu
Translating the precision of classical instrumentation to a pop landscape isn't easy. But Japanese-American violinist and composer Kishi Bashi has been performing his own brand of symphonic magic for nearly a decade. After a stint at Cornell's School of Engineering ended poorly, Bashi enrolled at Berklee College of Music, perfecting his passionate brand of violin performance while sitting in with countless chamber pop and indie rock musicians. After time spent touring and playing with everyone from pianist Regina Spektor to glam-rock collective Of Montreal, Bashi broke out on his own in 2012, releasing solo debut 151a on experimental label Joyful Noise Recordings. Since then, Bashi's oeuvre has expanded endlessly outward, encompassing everything from modern electronica to avant-garde classicism on 2014's Lighght and 2016's Sonderlust. The swirling, often intoxicating 2019 album Omoiyari deals with the internment of Japanese-Americans during World War II, examining the frightening parallels between the paranoia of 1940s United States and the current administration's obsession with building walls to divide different races and ethnicities. "F Delano" reassesses the legacy of Franklin Delano Roosevelt, who signed the fated Executive Order 9066 only 11 weeks after the attack on Pearl Harbor, while "Theme from Jerome (Forgotten Words)" analyzes the psychic pain of a population being forced to suppress its own culture. "History is really complicated," Bashi told NPR's All Things Considered in May. "You can have heroes and villains, and that's easy for children to understand, but for adults, we have to look at the complexities of the situation." (Nick McGregor) Metro Music Hall, 615 W. 100 South, 7 p.m., $18 presale; $20 day of show, 21+, metromusichall.com

Amon Amarth, Arch Enemy, At the Gates, Grand Magus
If there's one thing I know to be true, it's that nowhere will a good gimmick get you further than in the world of metal—and at the risk of hyperbolizing, Amon Amarth might just have one of the best. The Swedish quintet is one of the first—and one of the most well-known—bands to center their entire presentation on Norse mythology and Viking lore, giving their songs names like "Mjolner, Hammer of Thor" and "Valhall Awaits Me," while decking their stage show out with carved dragon heads and imitation Viking ships. Since their formation in 1992, Amon Amarth's signature brand of anthemic, melodic death metal themed to Scandanavian folklore has proven to be two great tastes that taste great together, and scores of like-minded "Viking metal" bands have sprung up in their wake over the past two decades. This week, they headline a truly stacked bill at The Complex's Rockwell stage, alongside fellow Swedish death metal pioneers Arch Enemy and At The Gates, two groups whose output in the mid-to-late '90s played an instrumental role in shaping the sound of heavy music in the 21st century. Stockholm "doom blues" outfit Grand Magus opens. (Nic Rensaw) The Complex, 536 W. 100 South, 7 p.m., $37.50, all ages, thecomplexslc.com

FRIDAY 10/4
Bleached, Dude York
After a scorching summer, the weather is getting brisk all too soon. Sisters Jennifer and Jessica Clavin—core members of Bleached—hail from a warmer and sunnier state, and you can tell by their music. Bleached spent the last decade trying on various styles of surf rock, post-punk and three-chord garage rock, championing the sounds of their native California but never pausing on one sound for too long. Their latest release, Don't You Think You've Had Enough? (Dead Oceans), finds the Clavin sisters keeping their sunny disposition, but they've traded power chords for disco beats and sun-kissed guitar licks. On lead single "Hard to Kill," they're no longer raging through the heartbreak and apathy of modern romance; they're dancing through it. "Place the gun to my heart," lead vocalist Jennifer intones over a promenading baseline. Their latest sets heavily favor new material, which might bring dancing to The State Room's hallowed pews. Their standard opener, "Shitty Ballet," which closes the new album, offers the false promise of acoustic quiet before exploding into a rager. "Yeah, once I start, I don't know how to stop," Jennifer belts. For the next hour, the room shimmies and sidesteps down the Pacific Coast Highway with warm weather and clear skies overhead. Openers Dude York, facetiously self-proclaimed as "America's Band," bring some earth-bursting guitar riffs of their own. (Robby Poffenberger) The State Room, 638 S. State, 9 p.m., $20, 21+, thestateroompresents.com 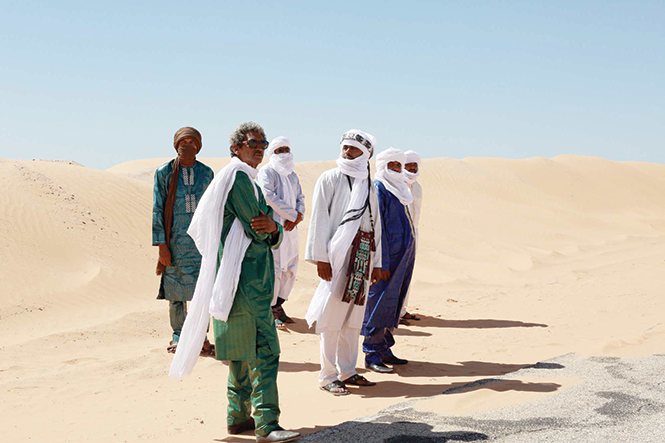 SATURDAY 10/5
Tinariwen
It's rare to find a group of native tribesmen from West Africa vying for pop stardom on the world stage, but credit Tinariwen with doing just that. Hailing from the Sahara region of northern Mali, they purvey an ancient sound that's found an unlikely fit with modern sensibilities. They were born from tragedy and turmoil; founder Ibrahim Ag Alhabib, a member of the nomadic Tuareg tribe, was only 4 when he witnessed his father's execution, after which he spent his early life in exile. Inspired by a Western movie about a singing cowboy, he fashioned his first guitar from a plastic water can, a stick and fishing wire. While conscripted for military service, he met other like-minded musicians, and following a revolution that restored his people's rights, he devoted himself to making music full time. His band eventually attracted international interest, and has since played festivals and major concert venues worldwide. Currently consisting of a nine-piece touring ensemble, the group dresses in garb native to the region and plays music that makes few concessions to Western expectations. Nevertheless, as their new album Amadjar makes clear, they find a clear connection via a sound that leans on psychedelic suggestion, mystery and mystique. An insurgent record label, Anti/Epitaph, and several enthusiastic musicians—Warren Ellis, Michah Nelson, Cass McCombs and Stephen O'Malley of Sunn O)))—help bridge the barriers, but the compelling melodies and seductive tones succeed on their own. At the end of the day, the music's sensuality mesmerizes the masses. (Lee Zimmerman) Metro Music Hall, 615 W. 100 South, 7 p.m., $18 presale, $20 day of show, 21+, metromusichall.com

SUNDAY 10/6
Boy Harsher, Fossil Arms, Spellling
It's hard to stand out in the realm of dark, electronic dance music. Boy Harsher, comprised of Augustus Muller doing beats and Jae Matthews on vocals, manages to be noteworthy in its particular composition of its "darkness"—airy synths and progressive trance beats combine with Matthews' range of whisper-to-scream vocals to create tracks that can be danceable and soothing, depending on your mood. The group began as Teen Dreamz, in which Muller scored short stories written and read by Matthews. As the music side of the project developed and the sound became more danceable and instrument-heavy, Muller and Matthews reformed into Boy Harsher in 2014, leading to the Yr Body release in 2016. You can quickly pick up on the group's shift to a dance floor focus, but Boy Harsher's 2019 releases, Careful and Country Girl Uncut, show just how much the group has developed its range of electronic music, managing to retain the core trance sound with more complex synth beats. If you've ever had an interest in French pop or electronic music, Boy Harsher is probably for you. They are joined by local band Fossil Arms, who are also electronic in the vein of New Order—more reliant on twee, '80s-style energy, but still with a pinch of dark. Lastly, Spellling—who made Bandcamp's "Best Albums of 2017" list with Pantheon Of Me—comes through with her own brand of lush electronica. (Parker S. Mortensen) The Urban Lounge, 241 S. 500 East, 8 p.m., $15, 21+, theurbanloungeslc.com

SUNDAY 10/6
Dropkick Murphys, Clutch, Hatebreed, Amigo the Devil
At first glance, Dropkick Murphys and Clutch might seem an odd pairing for a co-headlining national tour. Dropkick Murphys are best known for marrying the bagpipes and mandolins of traditional Celtic folk with scrappy, sing-along oi!, and for ushering in a slew of folk-punk acts in the early years of the new millennium. Meanwhile, Clutch is known for seasoning their monstrously hooky choruses and bluesy swagger with enough balls-to-the-wall stoner metal riffs to regularly land on festival bills alongside the likes of Behemoth and Slipknot. However, despite the sonic disparity between the two bands, they do share one important feature: an abiding enthusiasm for boozy, raucous guitar music underpinned by a no-nonsense, blue-collar sensibility. They might approach their craft from entirely different angles, but odds are the Murphys' "I'm Shipping Up to Boston" and Clutch's "The Mob Goes Wild" sound right at home next to each other in the middle of a sweaty, cheering crowd when the band comes to Salt Lake's Union Event Center. Connecticut metalcore stalwarts Hatebreed and Florida "murderfolk" up-and-comers Amigo the Devil open. (Nic Renshaw) Union Event Center, 235 N. 500 West, 6:15 p.m. $45.95, all ages, theunioneventcenter.com