THURSDAY 10/4
Ozzy Osbourne, Stone Sour, Zakk Wylde
It's rare to find an artist with such a strange array of public personas. But that's Ozzy Osbourne, fearsome frontman and wailing banshee whose stint at the helm of Black Sabbath made him an icon of heavy metal mania. Solo, Ozzy retained his trademark demonic designs—dripping gobs of fake blood, biting the heads off hapless bats, crazed campiness and more. Then there was the mumble-mouthed Ozzy, the clueless head of household on one of television's landmark reality series, The Osbournes. However, to truly do Ozzy justice, we'd also note that he's a Rock 'n' Roll Hall of Famer and Grammy-winning singer/songwriter who professes fervent belief in a higher power. Currently making the rounds on the No More Tours 2 trek—a belated follow-up to 1992's No More Tours tour, which itself played off of Ozzy's solo mega-hit "No More Tears"—Ozzy can also be credited with five decades of success playing the devil's devotee while selling some 100 million records in the process. Make no mistake: Tour title aside, this isn't the end for Ozzy. "I'm not retiring!" he said in a statement. "I'm still doing gigs. I'm still going to do shows. I'm just not doing world tours anymore."Thank goodness the Crazy Train hasn't run off the rails just yet. (Lee Zimmerman) Usana Amphitheatre, 5150 Upper Ridge Road, West Valley City, 7:30 p.m., $29.50-$350, all ages, usana-amp.com

FRIDAY 10/5
Cut Worms, Michael Rault
Cut Worms is the musical project of Mac Clarke, a Brooklyn-based devotee of vintage recording methods and '60s-style pop ballads that recall the Everly Brothers and The Kinks. On his most recent album, Hollow Ground, Clarke's songs—all recorded to 8-track tape—sound warm, grainy and scratchy, especially when his voice rises to a climax. It's almost like Cut Worms' music comes through a station wagon radio that can't quite handle the decibels. Clarke's voice lands somewhere between Bob Dylan and John Denver, and the latter comparison is reinforced by liberal use of a "Rocky Mountain High"-style reverb and a lightly strummed soft-rock aesthetic. The overall impression is ephemeral, otherworldly and timeless. But wait! There's more retro stuff on the bill: Supporting Cut Worms is Canadian singer-songwriter and guitarist Michael Rault, a fellow nostalgic who dredges the depths of rock history to create his own multi-layered sound. His latest album, It's a New Day Tonight, falls in line with the folk-rock of yesteryear, referencing the lush arrangements of Paul McCartney and Wings, Badfinger and Big Star. The bass lines bounce like an old soul record—Rault recorded the album at Brooklyn's Daptone Studios—and an admirable sense of melody pairs well with the grooves. Critics might argue that Cut Worms and Michael Rault both lean too heavily on the past, but we're not those critics. (Howard Hardee) Diabolical Records, 238 S. Edison St., 7:30 p.m., $12, all ages, facebook.com/diabolicalslc

Trevor Powers, mmph
Don't expect an easy go with the glitchy, eviscerated electronica of Boise resident Trevor Powers, who previously plied his trade under the name Youth Lagoon. That's precisely the point, however: After years spent burying his high-pitched vocals under a gauze of guitars, Powers puts his voice front and center on 2018's Mulberry Violence—alongside a few thousand after-effects and auditory glitches, of course. Finding inspiration in the graphic work of Francis Bacon, Sister Gertrude Morgan and Harry Clarke, Powers spent two years pasting cut-up pictures on his wall and building a sonic library informed by traditional jazz, industrial pop and brutal noise, all before he ever wrote a note of Mulberry Violence's 10 songs. He then released them in an equally compelling fashion, crafting couplets of interconnected tracks that ricochet from trip-hop to trance and R&B to krautrock. Seeing how Powers translates such schizophrenia to the stage should be interesting; Mulberry Violence's vivid visuals demonstrate as much forethought as the music does. "My only concern in art is following the visions," Powers recently told Ad Hoc. "Those rapturous flashes of imagination direct every stride. Ideas truly are phantoms, and life is far less grand and appealing if those phantoms aren't chased." (Nick McGregor) Metro Music Hall, 615 W. 100 South, 8 p.m., $13 presale; $15 day of show; 21+, metromusichall.com

SATURDAY 10/6
Suicidal Tendencies, Madball, Villain Poonhammer
There's one word that sparks fear in the hearts of music fans everywhere: hiatus. Some bands never recover from it, but Suicidal Tendencies are survivors. After multiple breakups and almost 30 lineup changes, the group is back again—and that's all because of frontman Mike Muir's 40-year perseverance. From Grammy nominations and forming his own record label, to other frontman gigs for Infectious Grooves and a solo project called Cyco Miko, to being hailed as an icon by the Skateboarding Hall of Fame, Muir is an underground powerhouse. The only remaining original member of ST, Muir never considered himself a singer—and still doesn't. Now a father, he even assures his family that he's never been a rock star. In fact, Muir founded the band in 1980 not to get famous, but to rebel against the robotic "do what you're told" music industry. After a dozen albums, Muir recruited living legend Dave Lombardo of Slayer to join Tendencies for 2016's World Gone Mad—an easy decision for Lombardo. "Suicidal influenced me to step up my game as far as energy," he told Billboard about seeing ST live in 1982. However, the godfathers of crossover thrash were reportedly on the verge of yet another hiatus last year. So in true Muir fashion, they waited until things got quiet and released another LP, Still Cyco Punk After All These Years. And with another LP comes another tour. In Salt Lake City, they share the stage with another hardest-working-band-ever candidate, NYC's Madball. (Rachelle Fernandez) The Complex, 536 W. 100 South, 7 p.m., $24.50, all ages, thecomplexslc.com

Tony Holiday & The Velvetones, Ol' Fashion Depot
We're losing one of our own. Tony Holiday, a Salt Lake City institution who helped integrate the blues basics into the local music scene, is making a move to Memphis. Known for his fiery harp work (and his prominent tattoos), Holiday has helmed several local outfits through the years, most notably The Velvetones. "I'm moving to Memphis to pursue the next level of my music career," Holiday says via email, while also noting that his longtime musical partner Landon Stone will relocate as well. A founder of the Utah Blues Society and winner of 2016's City Weekly Music Awards for Best in State Blues Artist, Holiday specializes in the funk or jump style of blues—sometimes lovingly referred to by Holiday as dirtbag blues. Still, he avoids categorization, venturing into country and rockabilly realms as well. But it's his passion, purpose and dedication we'll miss the most. Holiday's performance at The State Room is being billed as his last local show, and he's joined by a three-piece horn section and organist Jeremy Abernathy; blues protégés Ol' Fashion Depot open. "We will miss Salt Lake City and the Utah Blues Society very much," Holiday adds. "However, we hope to be back here as much as possible." In the meantime, let's plan to bid him a fond farewell. (LZ) The State Room, 638 S. State, 9 p.m., $15, 21+, thestateroom.com 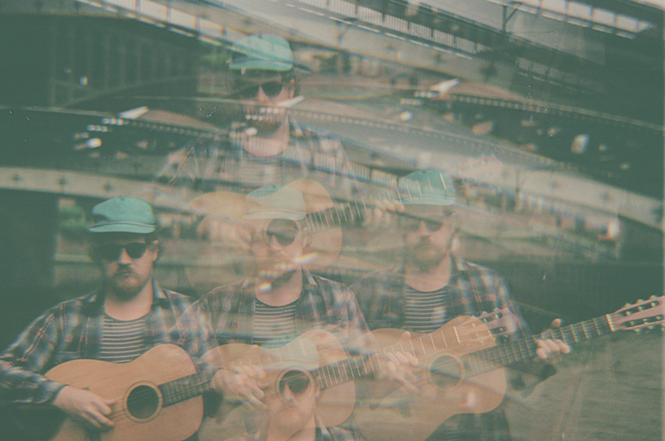 WEDNESDAY 10/10
Michael Nau & The Mighty Thread, Erin Rae, Static Replica
Nearly 10 years ago, before setting off on a long road trip, a dear friend pressed a copy of Cotton Jones' Paranoid Cocoon into my hand. As I popped the burned CD in while the sun set slowly and the hills of North Carolina stretched for miles, Michael Nau's rich, relaxed baritone shifted something significant in my music-loving mind. Here was melancholia and joy, languor and fear, nostalgia and hope, all mashed into one gentle psychedelic blend. Lyrical themes and acoustic riffs repeated themselves across the album, yet that surreal happenstance only added to the unmistakable aura, which has deepened on Nau's subsequent releases (another Cotton Jones LP, two full-lengths under his given name, this year's Michael Nau & The Mighty Thread). Call it easygoing. Call it "good vibes only." Call it classic country filtered through a psych-folk lens. Call it boring, even—some people, shame on them, have. For me, every new song and every new tour from Michael Nau and his rotating band of supporting merry-makers leads me back to that original trip down the Paranoid Cocoon rabbit hole: sun gleaming in my eyes, future uncertain, ribbon of road unfolding ahead, and the best damn soundtrack I could think of on repeat. If that feeling sounds like one you'd like to capture, consider this laid-back Wednesday night show a must. (Nick McGregor) The Urban Lounge, 241 S. 500 East, 8 p.m., $10 presale; $12 day of show, 21+, theurbanloungeslc.com