THURSDAY 10.6
Dweezil Zappa Plays Whatever the F@%k He Wants: The Cease & Desist Tour
OK, so Frank Zappa's sons Dweezil and Ahmet, who once looked so chummy on the cover of their band Z's album, Shampoohorn (Barking Pumpkin, 1994), are battling through their attorneys. Ahmet says Dweezil, a virtuoso guitarist just like their father, has no right to take his pop's 50-year musical legacy on tour. You know, like he's been doing—brilliantly—since 2006 with Zappa Plays Zappa, featuring former members of his father's band. You know, while Ahmet executes the Zappa Family Trust—and, evidently, attempts the same with Frank's legacy—while working with evil Disney. Rather than capitulate, Dweezil's doin' it anyway, celebrating the half-centennial of Freak Out!, the debut album by Frank's band The Mothers of Invention. Since Frank Zappa was a rebel and a musical genius, he's surely—in spite of the dismay he'd feel over his family fighting—looking down from the great Wowie Zowie in the sky with pride. (Randy Harward) The Depot, 400 W. South Temple, 8 p.m., $23 in advance, $28 day of, DepotSLC.com

FRIDAY 10.7
Thievery Corporation
Thievery Corporation was one of a number of units coming out of the club scene to expand dance music to include a rich mixture of ethnic and other stylistic influences, including acid jazz, Brazilian dance music, electronica, Indian classical, Middle Eastern and other music. Their very name emphasized their tactic of borrowing prolifically, and they even wrote lyrics in numerous languages; their music, as a whole, is a kind of homage to musical traditions. The name also implies their at-times-controversial politics, speaking out for progressive issues. The collective is celebrating their 20th anniversary on this tour, and it's remarkable both how the '90s don't seem that long ago, and how their sound still feels fresh and innovative after so many have followed in their footsteps, making the cultural mix almost cliché. (Brian Staker) The Complex, 536 W. 100 South, 7:30 p.m., $38 in advance, $43 day of, TheComplexSLC.com

Squeeze
When Chris Difford and Glenn Tillbrook finally reconvened their new-wave/power-pop hit machine Squeeze in 2007, it was a beautiful thing. Just ask the huge crowd that saw the English band perform with the B-52s at Red Butte Garden in 2012. Difford and Tillbrook, along with three all-new members, started dropping new music in 2010, with a collection of re-recordings of their hits meant to circumvent the fact that a corporation owns the rights to the originals. These retreads are so good that they called the album Spot the Difference (XOXO, 2010). And the actual new tunes on Cradle to the Grave (Virgin/EMI, 2015) measure up to classics like "Tempted" and "Hourglass." Naturally, the setlist is packed with hits and the obligatory new tune, along with Tom Waits and Tom T. Hall covers. Alas, they appear to have dropped "Black Coffee in Bed" from the set. Why, dudes? (RH) The Depot, 400 W. South Temple, 8 p.m., $30, DepotSLC.com

SATURDAY 10.8
The Reverend Peyton's Big Damn Band, Supersuckers, Jesse Dayton
This Saturday is for fans of rough and rowdy roots music. The Reverend Peyton's Big Damn Band, out of Brown County, Ind., pens paeans to down-home icons like "Mama's Fried Potatoes." Supersuckers are the supercharged, chrome-plated, overdriven entry in this trilogy of six-string troubadours. The Tucson, Ariz., trio is nearing their fourth decade, but Eddie Spaghetti and compadres show few signs of wear. And this kind of shindig wouldn't feel complete without someone representing Texas. In addition to putting out several acclaimed solo albums, fronting the Road Kings and giving voice to the fictional band Banjo & Sullivan in The Devil's Rejects, Beaumont native Jesse Dayton has played guitar on albums by The Supersuckers, Johnny Cash, Waylon Jennings and Willie Nelson, as well as filling in for Billy Zoom last year with X. Now that's a party. Try not to slip on all the spilt beer. (Brian Staker) The Urban Lounge, 241 S. 500 East, 8 p.m., $16 in advance, $18 day of, 21+, TheUrbanLoungeSLC.com

SUNDAY 10.9
Elizabeth Cook, Lee Harvey Osmond
Although it was her third album, firebrand country singer Elizabeth Cook made the biggest splash when she dropped Balls in 2007. The album, produced by Rodney Crowell, got slobbery raves from critics because Cook's songwriting and performance demonstrated big, swinging gravitas—and that Cook wasn't just another pretty face. Three years later, Welder, produced by venerated knobs-and-sliders guy Don Was (Rolling Stones, Bob Dylan) reiterated this and repeated the critical applause. You'd think that would've been a good thing, but as Cook enjoyed professional success, her personal life was heading in the opposite direction. Family members passed away, houses burned down and her marriage fell apart. That's how she explains the six years between Welder and the heady, atmospheric Exodus of Venus (Thirty Tigers). In spite and because of what she went through, Venus resonates with even more guts and fire than her first two albums, and puts Cook in the same class as Lucinda Williams and Neko Case. Acid-folkie Lee Harvey Osmond, aka Tom Wilson of '90s Canadian alt-rockers Junkhouse, opens, touring behind his third album, Beautiful Scars (Latent Recordings). (RH) The State Room, 638 S. State, 8 p.m., $18, 21+, TheStateRoomSLC.com 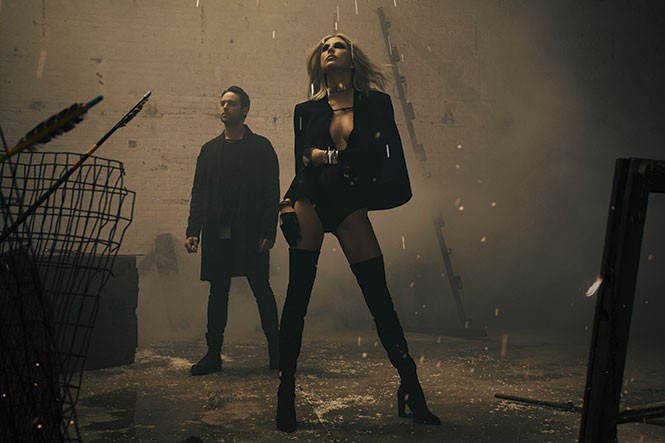 TUESDAY 10.11
Phantogram
The number of musical entities that seemingly started yesterday but are actually celebrating some kind of anniversary—even a decade—is astounding. In 2007, the duo of Sarah Barthel and Josh Carter, also known as Phantogram, was formed in Greenwich, N.Y., with a style—"ghost pop," you might call it—that draws upon dreamy soundscapes and synthetic beats, as well as nominally by the optical illusion of the same name. Their success is no trick, however, as their sophomore release, Voices, hit No. 3 on Billboard's rock and alternative rock charts and, as Twilight Concert Series fans saw, they joined Big Boi (of Outkast) to form the supergroup Big Grams. Phantogram's latest, Three (Republic Records), was released this week, with the notably melancholy refrain of the single, "You Don't Get Me High Anymore." It's doubtful anyone would say that about the duo's music, however. (BS) In the Venue, 219 S. 600 West, 7 p.m., $26 in advance, $28 day of, InTheVenueSLC.com

TUESDAY 10.11
Slayer, Anthrax, Death Angel
I have two friends who once dared each other to shout, as Slayer fans are wont to do, "SLAAAAAAAYERRRRR!" in their wives' faces at the peak of their lovemaking. They both wussed out, perhaps immediately losing their cred as fans of the legendary thrash metal pioneers. Not that I've done, or will do, that. A married man must have survival instincts so that we might live to enter the pit another day and exacerbate our back problems in the name of metal. Surely, risking injury—facing fucking danger—like that is enough to maintain probationary membership in Club Slayer? Better buy a copy of the band's new album—Repentless (Nuclear Blast), their first since Exodus guitarist Gary Holt replaced fallen founding shredder Jeff Hanneman—just to be safe. (Randy Harward) The Complex, 536 W. 100 South, 6:30 p.m., $49.50 in advance, $55 day of, TheComplexSLC.com