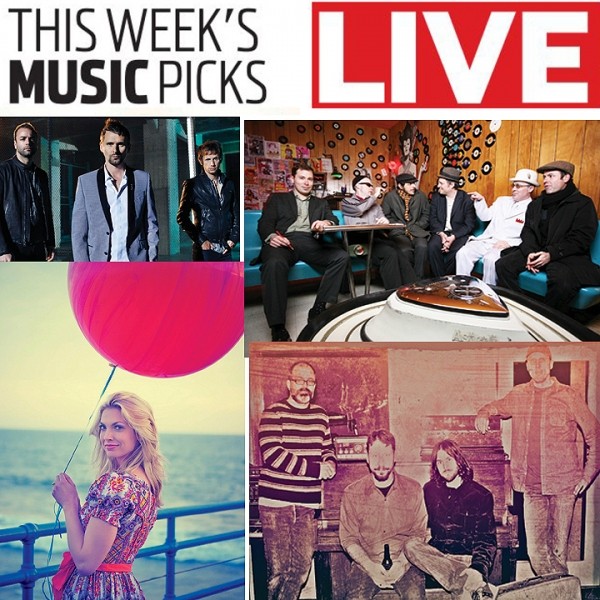 
As Muse has developed beyond initial “Radiohead with Freddie Mercury as the lead singer” categorizations, their songs have become bigger and more bombastic, their topics more geared toward politics, paranoia and revolution. The English band’s techno-orchestral sound—and Matt Bellamy’s voice, which moves from a guttural roar to a high-pitched wail that’s almost indistinguishable from the screaming guitars—imbues the songs with an otherworldly flavor, a sense that these conflicts are happening in another time or another galaxy. Muse concerts are always huge rock spectacles of light and sound, with sparkly guitars, lasers, light shows and clear-glassed pianos that emit explosions of colors, and their tour in support of 2012’s The 2nd Law is their biggest yet. The anthemic songs from that album will be the basis for much of tonight’s show, though older fan favorites like the thrashy-guitar “New Born” will make an appearance—but probably not the gorgeously understated, heartbreaking “Falling Away With You” from 2003’s Absolution, one of the only Muse songs the band has never played live. Cage the Elephant opens. (Rachel Piper)
EnergySolutions Arena, 301 W. South Temple, 7 p.m., $35-$65

Mindy Gledhill CD Release
Tonight is the second night of the two-part album-release show for Provo songstress Mindy Gledhill’s brand-new album, Pocketful of Poetry. Originally from California, Gledhill sings with her candy-coated voice—think the three DuPree sisters of indie-rock band Eisley—about her family (she recently had her third child), finding beauty in unexpected places, her worldwide travels and the magic of living a simple life. For Pocketful of Poetry, which was produced by Nashville-based Cason Cooley, she says she was partly inspired by a collection of “jotted-down pieces of ramblings in random notebooks, on napkins, paper plates, or blank walls that begged for graffiti” that she’s amassed since her previous release, Anchor, came out in 2010. The songs themselves—filled with mellow acoustic guitar, strings, piano and banjo—are fanciful and wistful indie-pop creations, often inspired by some rose-colored memory, such as on “Finding Home,” with the lovely lyrics “Remember when the grass was tall, and we’d build castles out of golden straw.” Book on Tape Worm will start things off. (Kolbie Stonehocker)
Velour, 135 N. University Ave., Provo, 8 p.m., $12

The Slackers
If you’re one of those naysayers who think ska is annoying circus music, I have a band for you: The Slackers. Yeah, they play a blend of rocksteady, dub and Jamaican reggae (complete with lots of horns and organ), and, technically, you can skank to their music, but their knack for writing relatable songs and incorporating American musical styles into their unique sound—including soul, blues, rock and even country—has made them into a ska band that even folks who don’t care for ska can dig. Formed in Manhattan in 1991 and fronted by the great Vic Ruggiero, The Slackers haven’t released new material in a few years, but that’s about to change. During the summer, they did a fundraiser for some upcoming projects, including the new EP My Bed Is a Boat and the awesome-fied re-release of The Slackers classic Wasted Days (2001), so a new batch of congregants can come to “the church of slaaaack.” Show Me Island and One Way Life will start things off. (Kolbie Stonehocker)
The Complex, 536 W. 100 South, 7 p.m., $15 in advance, $17 day of show

Baths
The music created by electronic artist Will Wiesenfeld (aka Baths) is so dreamy and ethereal it’s hard to imagine him fashioning it out of anything other than clouds, mist and atmosphere. But as his recent Tiny Desk Concert at NPR with partner Morgan Greenwood showed, Wiesenfeld is indeed a human, not a wizard, and his inventive sound is masterfully crafted with twinkles of keyboard, layered loops, synthesizers and weird, shaky vocals. The set list was made up of songs from Wiesenfeld’s latest album, Obsidian (Anticon), released in May, including the morose “Miasma Sky” and the darkly danceable “Phaedra.” The songs’ wince-worthy lyrics—about suicide, sex and the most uncomfortable frustrations—might repulse at first listen, but make this gloomy album strangely intriguing. Jerome LOL and Time Wharp are also on the bill. (Kolbie Stonehocker)
The Urban Lounge, 241 S. 500 East, 8 p.m., $12 in advance, $14 day of show


Lake Island CD Release
If the debut album from Provo indie-rock seven-piece Lake Island were a landscape, you’d definitely get lost in it—fitting, with a title like Outermost—but it would be such a beautiful place that you wouldn’t mind. Recorded at June Audio and Black Pyramid in Provo, the album’s six tracks—all with mysterious one-word song titles—“deal with our emotions toward our surroundings and the ebbs and flows that life gives,” the band says via e-mail. With a quivering ethereality that might remind listeners of the haunted hinterlands created by Sigur Rós, the mostly instrumental Outermost is jaw-droppingly beautiful, as shimmery and atmospheric as an aurora. Album highlights include “Relapse,” the emotional titular track (with the lyrics “I just want you to go out from my head”) and the unearthly “Wolves,” which will undoubtedly give you shivers as it builds to almost unbearable tension. Desert Noises and Tess Comrie are also on the bill. (Kolbie Stonehocker)
Velour, 135 N. University Ave., Provo, 8 p.m., $7

The Weekenders
In a world of trendy electronic music, new hyphenated music genres and chiptune, what’s a fan of meaty old-school rock to do? It’s not that you want all the kids to get off your proverbial lawn; you just wish your lawn were in the 1970s. Rest assured, Led Zeppelin and Rolling Stones fan, local rock outfit The Weekenders are resurrecting that vintage sound—as heard on their 2012 self-released debut album, Don’t Plan On—but they’re not simply pulling it out of a box in the attic and dusting it off. Sure, the heavy, chugging guitar and thudding drums are all there, but The Weekenders’ raw sound has one foot firmly in 2013 while it’s nodding to the classics. Check out the psych-rock gut-punch “Twenty Armed Men”—with Jack White-esque vocals—and the biting and sexy “Hard Woman,” with guest singer Darby Mest a formidable foil for main vocalist Rob Reinfurt. The North Valley and The National Parks are also on the bill. (Kolbie Stonehocker)
The Urban Lounge, 241 S. 500 East, 8 p.m., $5

Minus the Bear
Minus the Bear’s music has been called a lot of things—including indie rock, math rock and experimental rock—probably because their sound changes each time they release a new album or EP. The album Omni, released in 2010, surprised fans with its energetic, poppy feel, while Infinity Overhead was more serious musically and lyrically. With their newest EP, Acoustics II, the Seattle band forgoes the electric guitar and synthesizer and picks up the acoustic guitar to revamp some of their fans’ favorite songs. There will also be two brand-new acoustic songs on the album. Tera Melos and The New Trust will start things off. (Laurie Reiner)
The Depot, 400 W. South Temple, 8 p.m., $20-$22 in advance, $25-$27 at the door