A Place To Bury Strangers, X96 Half Ass Show, Brandon Flowers and more 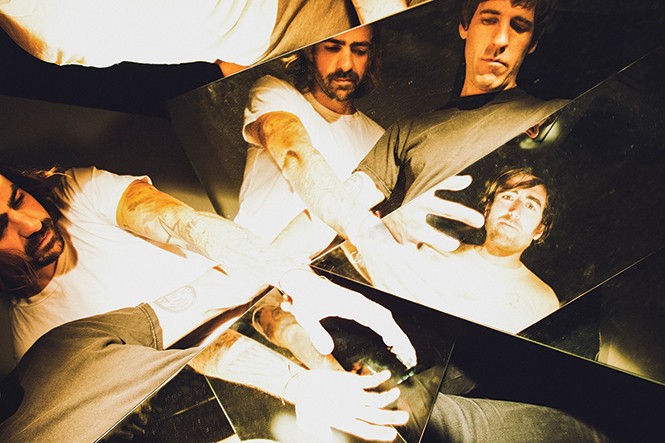 The distortion and reverb of Brooklyn psych-noise band A Place To Bury Strangers is more focused and melodic on the new record, Transfixiation (Dead Oceans). In true shoegaze style, singer/guitarist Oliver Ackermann's vocals are nonchalant and nearly monotone. But APTBS's shoegaze isn't simply three guys with heads hung low, dispassionately playing their instruments—their shows are an intense assault of sometimes industrial and always very loud rock. The stage will be extremely dim, with an occasional white spotlight drifting through the onstage fog, pushing your ears to make up for the lack of sight. Brooklyn alt-rock group Grooms and local punks Foster Body open. (Tiffany Frandsen) The Urban Lounge, 241 S. 500 East, 9 p.m., $12 advance, $14 day of show, TheUrbanLoungeSLC.com


Funk-dubsteppin' DJ Griz, from Detroit, drops the needle to Sky's Salt Lake Comic Con Kickoff Party. Say It Loud (All Good Records) opens with a laid-back, alto sax-driven tune, with a subtle club sensibility. As the album progresses, funk, soul, glitch and techno mix into a high-energy amalgamation of groove and fun. The album came together from recordings of the electric guitar, trumpets in the forest, the saxophone (which he, himself, plays), children's choirs and funk jam sessions. The guy knows his hip-hop history, and pays homage to RJD2's 2002 hit "2 More Dead" in "It's All Good." (Tiffany Frandsen) Sky, 149 Pierpont Ave., 9:30 p.m., $15-$30, SkySLC.com

You've no doubt heard "Renegades," the ubiquitous hit single by indie folk group X Ambassadors. But have you seen the video? Although the song was written specifically to promote the Jeep Renegade, the inspirational clip spotlights a group of disabled athletes, which is a nice balance to the commercialism—especially since keyboardist Casey Harris is blind. U.K. quartet The Struts are an odd pairing, since they work somewhere between the alt-rock of Supergrass and the glam rock of the New York Dolls—with flickers of Freddie Mercury in the vocals. They're both worth checking out, though. (Randy Harward) The Complex, 536 W. 100 South, 8:30 p.m., $20 (limited $9.60 tickets may still be available), TheComplexSLC.com, X96.com

Blues, Brews & BBQ has been a weekly fest at Snowbasin every Sunday from mid-June, continuing through late September, and the penultimate date this year is one not to miss. The songs from Winnipegger country-folk quartet The Bros. Landreth evoke the wide-open spaces up North that recall the American West—alt-country drenched in a bit of down-and-dirty blues that tells a story. Idaho-born Jeff Crosby, together with bassist brother Andy and a few others form the Refugees, whose music was featured on the cable series Sons of Anarchy. Crosby's Too Many Walls EP was recorded in Utah, and he looks forward to returning since last December's guest spot with Lukas Nelson & Promise of the Real at the State Room. His rock & roll with tinges of folk and even country pedal steel helps him feel almost like a native son here. Colorado jam band Digg opens. Crosby will also play at The Cabin in Park City on Saturday night; for details, visit TheCabinParkCity.com. (Brian Staker) Blues, Brews & BBQs Festival at Snowbasin Resort, 3925 Snowbasin Road, Huntsville, 12:30 p.m., free, Snowbasin.com


What is a Megafauna? Just an overly large creature, especially anything with "-saurus" in its name. No dinosaurs of rock, however, the Austin, Texas-based band adds a new spiral to the DNA of heavy music with their idiosyncratic mix of math, psych and prog rock. A power trio with a female vocalist, Dani Neff, they are capable of shredding on occasion. Maximalist (Danimal Kingdom), their third release, proves them taking the power of three to the max, while showing off some tasteful playing. They answer the musical question, "Where have all the riffs gone in indie rock?" and show they haven't all disappeared to the land of the lost. (Brian Staker) The Cabin, 825 S. Main, Park City, 9:30 p.m., $5, SmithsTix.com

The Desired Effect (Island), the second solo album from The Killers frontman Brandon Flowers, is upbeat and catchy while confronting serious themes like growing up, love and redemption. Expect tonight's set to focus on this material, with some crowd-pleasing Killers hits. Since spring, new singles have been arriving from Mexico City's Rey Pila's upcoming release, The Future Sugar (Cult), which has been in the works since the band moved to New York City in 2012. Sugar's indie-synthrock band's songs are atmospheric, spacious and reminiscent of '80s pop. The music is freeing, as evidenced by frontman Diego Solorzano, who flails about with reckless abandon onstage. (Tiffany Frandsen) The Complex, 536 W. 100 South, 8:30 p.m., $35, TheComplexSLC.com

Eyes Wide, Tongue Tied (Cooking Vinyl), the fourth album from Glaswegian alt-punks The Fratellis, opens with the dramatic and cinematic "Me and the Devil." While there is still some street-punk edge, there are also vibrant and calmly cheerful moments (such as in "Desperate Guy") and some cowboy twang moments (such as in "Dogtown"). In other band news, bassist (and shouter, according to the band's Facebook page) Barry Fratelli (Barry Wallace) fancies himself a DJ on the side now, (as Baz Fratelli), and is spinning several afterparties during the tour. Swedish-Floridian electric-pop folk group Grizfolk open. (Tiffany Frandsen) Urban Lounge, 241 S. 500 East, 9 p.m., $18 in advance, $20 day of show, TheUrbanLoungeSLC.com

Underground hip-hop artists tend to be able to get away with more experimentation than mainstream rappers—like maybe embedding a clip of Yoda saying "Do or do not. There is no try." "Psalm 84" from New York duo Cannibal Ox, from the new record, Blade of the Ronin (I Hip Hop), does just that, in fact. A ronin is an masterless samurai, and the album is katana-sharp, with references to Dave Chappelle and G.I. Joe. It's Kickstarter-funded, and it's the first full-length release since their debut, The Cold Vein—which dropped 14 years ago. The opening lineup is Liam Tracy, A-Dub and Jay Citrus. (TF) Urban Lounge, 241 S. 500 East, 9 p.m., $13 in advance, $15 day of show, TheUrbanLoungeSLC.com

33-year old British Columbia-born synth-pop singer songwriter Nicholas Thorburn, frontman of a number of units, including The Unicorns and Islands, also maintains the persona Nick Diamonds when performing solo. Diamonds' newest release, City of Quartz (Manque Music), is the sophomore follow-up to 2011's I Am an Attic, and the first single, "The Sting," sounds like any number of '80s cop-show intros—a little Miami Vice, perhaps—only, instead of the adrenaline-fueled drive of the period, it's the slowed-down, languorous pulse of nostalgia. Local dance-pop duo Conquer Monster and surf-opera combo Beachmen open. (BS) Kilby Court, 741 S. 330 West, 7 p.m., $12, KilbyCourt.com THURSDAY 9.24