After taking a hiatus to pursue separate projects, Interpol—formed in 1997 in New York City—has regrouped with their fifth album, El Pintor, released earlier this month. With echoing guitar riffs and symphonic harmonies, the album ventures into a hypnotic, melodic territory that's quite different from the band's previous post-punk style. Tracks like "All the Rage Back Home" and "Anywhere" highlight the band's newer sound, while "Everything is Wrong" brings you back to Interpol's original formula of simple guitar chords, an easy bass track and uncomplicated drumming. Rey Pila is also on the bill. (Rebecca Frost) The Depot, 400 W. South Temple, 8:30 p.m., $28.50 in advance, $30 day of show, DepotSLC.com


The haunting, moody sounds produced by Seattle quartet La Luz is a perfect example of how music that's labeled "surf" doesn't necessarily have to be about beaches, sunshine and waves. As heard on their debut album, 2012 EP Damp Face, and their most recent release, 2013 full-length It's Alive, La Luz might be flooding their guitars with plenty of surf-y reverb, but their lyrics—delivered with four-part doo-wop harmonies—are often about longing, loss and other serious topics. That's not to say It's Alive doesn't have at least a little sun; instrumental track "Sunstroke" is downright sultry. But what's most prominent is the fact that La Luz are skilled at taking a classic genre and making it their own. La Luz is opening for Ty Segall. Local rockers Max Pain & the Groovies are also on the bill. (Kolbie Stonehocker) The Urban Lounge, 241 S. 500 East, 9 p.m., $13 in advance, $15 day of show, TheUrbanLoungeSLC.com; limited no-fee tickets available at CityWeeklyStore.com


The season for outdoor music festivals is almost over, but the X96 Big Ass Show is ending summer with a bang. The all-day event is an opportunity for fans of popular music to catch seven high-profile bands, all for one wallet-friendly price. Befitting the Big Ass Show's 10th anniversary, the impressive, pop-heavy lineup is made up of big mostly national and international names. Dance-friendly acts on the bill include Provo pop-rock foursome Neon Trees; Los Angeles earworm creators Capital Cities; New York electro-rock duo Phantogram; New Zealand brother/sister indie-pop duo Broods; and Portland, Ore., indie-pop/electro twosome Priory. Striking a balance amid all that pop will be Florida hardcore band A Day to Remember and California alt-rock band The Eeries. (Kolbie Stonehocker) The Gallivan Center, 239 S. Main, noon, $25 in advance, $30 day of show, TheGallivanCenter.com


Even if the only French you have under your belt is the stuff you learned in high school French, the messages contained in Belgian hip-hop/electro artist Stromae's music won't be lost on you. While Paul Van Haver, aka Stromae—the reversed syllables of "maestro"—does sing all of his lyrics in French, the striking visuals he uses in his music videos help get the songs' meanings across, such as in the video for "Alors On Danse" ("So We Dance"), which features a browbeaten office drone seeking release from his dull, claustrophobic life. But nowhere are those visuals more apt than on the video for the sumptuous, impossibly catchy song "Papaoutai" ("Papa, ou t'es?" or "Papa, where are you?"), from his 2013 album, Racine Carrée. Stromae's own father was killed in the Rwandan genocide in 1994, and in the video, he utilizes the symbol of a mannequin to represent absent fathers as his lyrics discuss the emptiness and emotional frustration that he experienced growing up with a single parent. (Kolbie Stonehocker) The Depot, 400 W. South Temple, 8 p.m., $20 in advance, $23 day of show, DepotSLC.com


Behind Katy Perry's candy-coated, glittery look is a sound that's ... also candy-coated and almost relentlessly positive. But behind all that sugar is a performer with the stamina of a draft horse and the poise of a lifetime politician, as made apparent in Perry's 2012 autobiographical documentary, Part of Me, which followed her rise from gospel music to eyebrow-raising sex-positive pop. Interspersed with high-octane concert footage and meet & greets with tearful fans were glimpses into the life and mindset of a superstar who still struggles with the disapproval of her Pentecostal pastor parents, and who militantly maintains her image as an always-confident bubbly pop star—except in a piercing moment late in the film when she's huddled in a chair, weeping quietly, to the consternation and confusion of her team (it's revealed later that her marriage was imploding at the time). Perry's handlers ask if she wants to cancel the show, but she gets dressed, puts on her makeup and peppermint-swirl dress while gulping back sobs, plasters on a 100-watt smile and performs a show that doesn't lack a single sparkle. And no matter what's going on in her personal life, that sparkle, color and energy is what fans can expect tonight. (Rachel Piper) EnergySolutions Arena, 301 W. South Temple, 8 p.m., $29.50-$100.50, EnergySolutionsArena.com


The debut album from Portland, Ore., four-piece Grand Lake Islands, 2013's Wake of Waking, is something truly special: a folksy, twangy tapestry of mandolin, strings, lap steel, piano, guitar and delicate vocals. And the EP's welcoming intimacy seems to plant the listener in the midst of the music, surrounded by the voices and instrumentation by frontman Erik Emanuelson and the band's three other members. As "a testament to questions, declarations and deliberations" that bubbled up once Emanuelson made the decision to leave his teaching job and the East Coast behind and head west, Wake of Waking is full of melancholy ponderings and hopes for new adventures. Grand Lake Islands will release their debut full-length in January; from the sound of new track "Diamond Eyes," it will surely be one to check out. Fellow Portland-dwellers Snowblind Traveler are also on the bill. (Kolbie Stonehocker) Muse Music Cafe, 151 N. University Ave., Provo, 8:30 p.m., $5, MuseMusicCafe.com 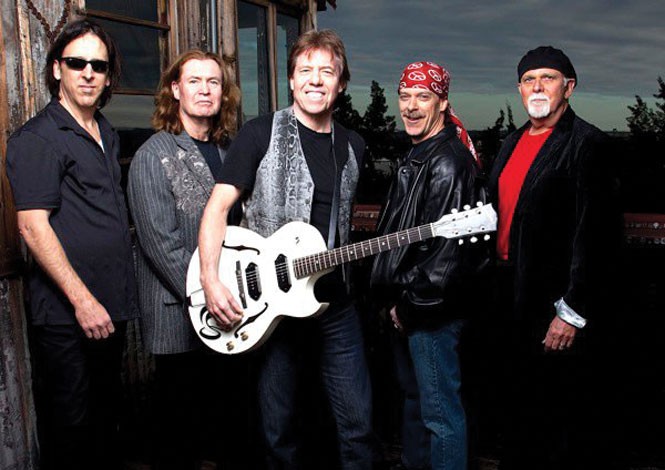 
Famous for hits such as "Bad to the Bone" and "Who Do You Love," iconic blues-rock band George Thorogood & the Delaware Destroyers—hailing from the state of the same name—has been a staple of American rock & roll since the late '70s. Featuring trashy guitar and Thorogood's gravelly voice, The Destroyers' trademark core-shaking sound hasn't lost a bit of power over the years. And their latest album,2120 South Michigan Avenue, released in 2011, explores the versatility of that sound, as Thorogood puts his own spin on classics like Chuck Berry's "Let It Rock" and Willie Dixon's "Seventh Son." Trampled Under Foot will also perform. (Nathan Turner) The Depot, 400 W. South Temple, 8 p.m., $36 in advance, $40.50 day of show, DepotSLC.com