THURSDAY 9/5
The National, Alvvays
Since the early 2000s, the term "adult alternative music" has come to represent bland, stodgy Muzak with a thin veneer of hipness, cranked out to fill the cars of equally bland and stodgy 30-something office drones. For almost as long, the music of The National has been making an incredibly strong argument for a redefinition of that term, crafting songs meant not to soundtrack the tedium of adult life, but to capture the thorny, complicated emotions that bubble under that tedium—to capture, as their own song "Mistaken for Strangers" puts it, a "fall into the un-magnificent lives of adults." Frontman Matt Berninger's powerful, velvety baritone is their most immediately apparent asset, but the rest of the band's understated yet potent take on post-punk finds and examines an entire spectrum of emotions within Berninger's trademark melancholia, and has propelled nearly every one of their albums since 2005's Alligator to critical adoration. The National's live show is almost as acclaimed as their studio work—they were ranked by Rolling Stone as one of the top 50 live bands in 2013—and they come to the Ogden Amphitheater as part of the 2019 Ogden Twilight Concert Series. They are supported by Canadian indie-pop staples Alvvays, whose acclaimed 2017 album Antisocialites has given them the lasting mark of promise. (Nic Renshaw) Ogden Amphitheater, 343 E. 25th St., Ogden, 5 p.m., $20 advance, $25 day of show, all ages, ogdentwilight.com 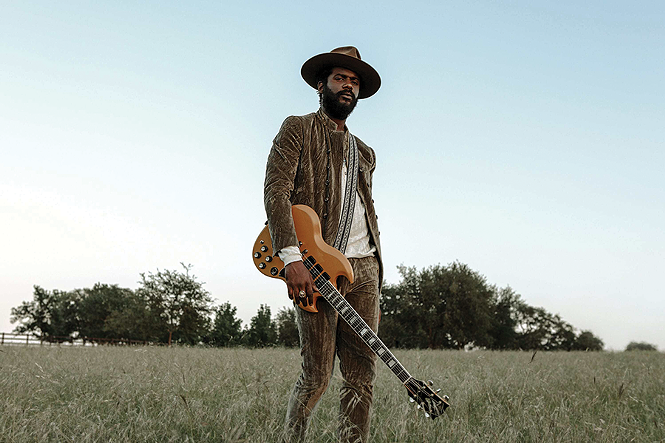 FRIDAY 9/6
Gary Clark Jr., Los Coast
For some artists, attaining elite status as a blistering blues guitar slinger would be more than enough to sustain a career. But at age 35, Texas-bred shredder Gary Clark Jr. has exerted significant effort strengthening the other parts of his repertoire. Not content fusing blues, rock 'n' roll and soul, he's incorporated elements of hip-hop and reggae into his sound. Able to hold his own on stage with B. B. King, Buddy Guy and The Rolling Stones, Clark has recently focused on strengthening his recorded output, shifting the conversation surrounding his skills from "What a showman!" to "He's a hell of a singer-songwriter." On 2019's This Land, Clark flexes his major-label bona fides not by producing a slick, guest-star-studded record, but by channeling the dissonance of the American blues into a fire-breathing slab of political rock. On the title track, Clark ruminates over life on his new Texas ranch, where racism seethes on the parched surface: "Paranoid and pissed off/ Now that I got the money/ Fifty acres and a model A/ Right in the middle of Trump country." On "The Governor," Clark dishes on America's racially skewed justice system; on "Feed the Babies," he honors his mother and reflects on his own filial duties now that he's a father. "Highway 71" mixes dub vibes, trap beats and analog electricity, while "Dirty Dishes Blues" channels Clark's love of acoustic pre-war blues. Across This Land, Clark updates the genre's original M.O. with a punk sneer and an askance hip-hop slant. "The home of the brave doesn't mean the same thing for everybody," he told Rolling Stone in February. "[But] I'm not gonna let what's happening in the country right now overshadow that there is great in this world. There's love here. We just can't let people take that away." Los Coast opens. (Nick McGregor) Red Butte Garden Amphitheatre, 2280 E. Red Butte Canyon Road, 7:30 p.m., all ages, sold out as of press time, redbuttegarden.org

FRIDAY 9/6
Sunn O))), Papa M, Big Brave, Eagle Twin
From the goofy, over-the-top camp of Gwar, to the trippy, flower-power jamfests of Phish, to the blood-sweat-and-gasoline lunacy of the Butthole Surfers, some artists are best experienced live. Seattle drone-metal outfit Sunn O))) (with a silent O)))) is just such a group. Their patiently constructed, meticulously textured blend of sludge and ambient can be a rewarding experience on record, especially on albums like Black One and last year's Life Metal, but simply sitting there with headphones on, you could be forgiven for some confusion as to why these guys are one of the hottest names in underground metal. That's because Stephen O'Malley, Greg Anderson and their cohorts made their name by offering a truly unique and powerful live experience, in a genre with no shortage of great live acts. The band members stand shrouded in a thick fog, obscure their faces with black robes and turn their exercises in texture and ambience into exercises in sheer volume, pummeling the audience with an amplitude so extreme that some report suffering severe headaches and nausea as a result of the sheer amount of sound being thrust upon them by the band. Salt Lakers will have the chance to subject themselves to Sunn O)))'s sonic invasion when the band stops by Metro Music Hall. Earplugs are optional, but heartily advised. (NR) Metro Music Hall, 615 W. 100 South, 7 p.m., $28 advance, $30 day of show, 21+, metromusichall.com 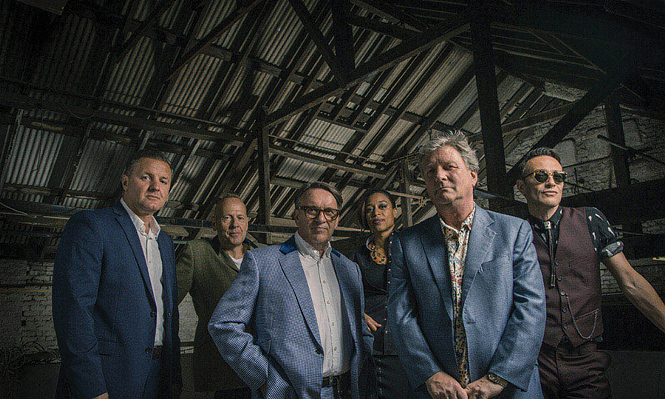 SATURDAY 9/7
Squeeze, X
If you weren't around in the late '70s, or you don't remember the late '70s, or for some reason you chose to forget the late '70s, here's an excuse for a repeat visit: Two of the most enduring outfits born out of that oft-maligned musical era are still going strong, and sounding just as good as they did back in the day. That's a high bar for any band, but Squeeze and X easily measure up. Having endured the usual breakups and makeups so common in the world of rock 'n' roll, both of them boast legacies well worth revisiting. Indeed, each outfit offers a stash of songs that are as compelling now as they were originally. Chris Difford and Glenn Tilbrook—the pair responsible for penning such pop classics as "Tempted," "Black Coffee in Bed" and "Pulling Mussels (from the Shell)"—still helm Squeeze, and given the fact they were once hailed as the Lennon & McCartney of their generation, it's enough to note that their legendary partnership survives. For its part, X tours with its original lineup consisting of John Doe, Exene Cervenka, Billy Zoom and D.J. Bonebrake, and their fiery post-punk insurgency is as fiery as ever. Front persons Doe and Cervenka were a formidable duo then, and they remain so now. So don't think of this superb double bill as some nostalgia trip or oldies encounter. Catch them while you can, and enjoy what you might have missed. (Lee Zimmerman) Snow Park Outdoor Amphitheater, 2250 Deer Valley Drive, 6:30 p.m., $50-$85, deervalleymusicfestival.org

SATURDAY 9/7
The Moss, Dad Bod, Indigo Waves, Drew Danburry
Listening to The Moss is like feeling the breeze of a room temperature fan—but that's not a drag! Room temperature is comfortable, and so is breezy surf rock. The Provo group's sound isn't ska, like at all, but sometimes mid-song you might imagine it'll break down that way purely from its laid-back energy. Instead, the whole project wails and sways, mining soft riffs for serotonin. Their first full album bryology dropped this July, and it finally shows off the almost giggly nature The Moss have been developing in their one-offs and on their Sara James EP. They demonstrate this brighter side of themselves on the stage at Kilby Court, where they share the stage with Dad Bod, who've released an EP this year along with a smattering of singles. Three members of the four-piece are brothers, sharing facial features to the point that seeing them creates an eerie sense of white dad homogeneity. Dad Bod have been injecting some funk into their sound lately with the singles "Enough" and "Some Kind of Confidence" a track that's even a little jazzy. The 2019 Dad Bod EP is probably a signal of what their upcoming full-length should sound like—a sharp but languid Connan Mockasin-esque meandering, music perfect for fall walks. Provo band Indigo Waves bring their upbeat, Mac DeMarco-rooted pop rock, and local opener Drew Danburry, who's managed to continue writing and producing music since the early aughts, revs the crowd. A classic Kilby show like this, made up of a flurry of like-minded locals, should be a great kickoff to all the upcoming September shows. (Parker S. Mortensen) Kilby Court, 741 S. Kilby Court, 7 p.m. $7 advance, $10 day of show, all ages, kilbycourt.com

WEDNESDAY 9/11
Summer Cannibals, Corner Case, Durian Durian
What's most remarkable about Summer Cannibals' fourth and most recent album, this year's Can't Tell Me No, is that it wasn't supposed to exist. After working on the actual planned album for a year, guitarist Jessica Boudreaux received a death threat from someone involved with the album who violently claimed ownership of the songs and creative work. Boudreaux and the band made the decision to abandon the record, and asked label Tiny Engines for two additional weeks to write and record a whole new album. Bordreaux told The Grey Estates in an interview that, "I didn't want to let anybody or anything take away another year of this band's life, because all that time is a lot of time. We lost a lot of momentum in the three years since our last record." That last album was 2016's Full of It, which is a pleasant indie rock record with some tracks that have stood the test of three year's time. To use Spotify as a metric: "Simple Life" and "Say My Name" are still in the band's Spotify Top 5. Quickly catching up is the title track to Can't Tell Me No, and no offense to Full of It, but the constructive rancor of Can't Tell Me No is just more interesting. The two-week time constraint instantly brings a rougher sound, but the full-throated dedication to releasing a full, 11-song album to break free of an abuser is hard to shake. Local band Corner Case opens, followed by Durian Durian's dance synth act. (PSM) The Urban Lounge, 241 S. 500 East, 8 p.m., $12, 21+, theurbanloungeslc.com