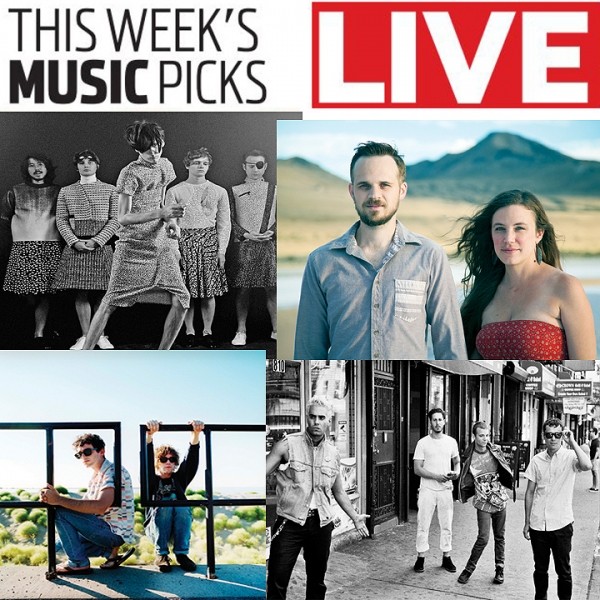 Twilight Concert Series: MGMT
MGMT brought “need more cowbell jokes” to the front of fans’ minds with the release of new song “Your Life Is a Lie,” from their new self-titled album, out Sept. 17. While the band performed the song on the Late Show With David Letterman on Aug. 22, lead singer Andrew VanWyngarden hit a giant cowbell. The cowbell reappeared during the FYF Fest in Los Angeles on Aug. 25, where it was played by Henry Winkler (Fonzie on Happy Days), who had a cameo in the song’s music video as well. Here’s hoping the cowbell will join the band in Salt Lake City, too. Kurona will start things off. (Laurie Reiner) Pioneer Park, 300 S. 300 West, 7 p.m., $5

Deerhunter
When Atlanta rock & roll five-piece Deerhunter performed on Late Night With Jimmy Fallon in April, frontman Bradford Cox probably made some of the sensitive folks in the audience more than a tad uncomfortable—his stage getup included a bouffant black wig, lipstick-smeared teeth and a bandaged hand slathered in fake blood—but he’s used to it, and doesn’t give a damn. His in-your-face personality—he told Buzzfeed that he hates Morrissey, who “makes me want to wear fur”—and heavily distorted singing voice (think Jon Spencer of The Blues Explosion, or Lux Interior of The Cramps) give him a commanding stage presence that’s the epicenter of Deerhunter’s noisy, razor-sharp, punk-influenced sound. The band’s latest album, Monomania (4AD), released in May—trivia: Webster’s defines “monomania” as “an excessive interest in or enthusiasm for some one thing; craze”—is intrinsically American: all swagger, black leather jackets, grit, cigarette smoke and late nights. Wymond Miles will start things off. (Kolbie Stonehocker)
The Urban Lounge, 241 S. 500 East, 9 p.m., $16 in advance, $18 day of show

Provo Rooftop Concert Series: Ryan Innes, The New Electric Sound
Summer is winding down, but this fantastic double-headliner show with Ryan Innes and The New Electric Sound will keep the warm-weather good times rolling at least a bit longer. Provo surf-rockers The New Electric Sound are fresh off a West Coast tour in support of their excellent self-titled album, which showcases their vintage-friendly vibe. The band is inspired by classic artists like the Beach Boys, Dick Dale and Buddy Holly, but the five members don’t sound they walked off a California beach in 1960. Instead, the band describes itself on its Facebook page as “a surf-rock/oldies-inspired band with a new twist and shout.” Pianist/songwriter Ryan Innes may have been eliminated from The Voice in May, but he chose to see the turn of events as “a beginning” instead of a defeat—their loss; we’ll gladly keep him. His lyrics are smooth, and his big, soulful croon is even smoother. Amy Whitcomb will start things off. (Kolbie Stonehocker)
Provo Town Square Parking Terrace Rooftop, 100 N. 100 West, Provo, 8 p.m., free

Hope & Tim Glenn CD Release Show
For their debut album, We Are the Choral Copse, husband/wife duo Hope & Tim Glenn recruited “a bunch of our friends” to create a lush, Americana-influenced sound that effectively shows off the couple’s flawless harmonies. That group effort is reflected in the album’s title, which comes from one of Tim’s favorite books, A Sand County Almanac by Aldo Leopold. “It’s the name of a short chapter that describes a copse of trees outside of a farmhouse that was often full of songbirds in the morning,” he says. “I’ve always loved the symbolism of ‘The Choral Copse’ for a group of musicians, and particularly our band.” The product is 11 soul-lifting country/folk tunes, full of twangy guitar and touches of organ, with Hope and Tim trading off on lead vocals. “Hope and I are … really inspired by soulful vocals,” Tim says. “The stuff that has meat, and meaning, and literally gives you shivers,” and that influence absolutely shows. Check out highlights “Old John” and the emotional “Be Here Now.” Michael Gross & the Statuettes, Folk Hogan and Johnny Cowan are also on the bill. (Kolbie Stonehocker)
The Urban Lounge, 241 S. 500 East, 9 p.m., $5

Animal Collective
When I heard Animal Collective for the first time, my reaction was, “Owwww, my brain … what the hell was that?” You’ll probably have a similar reaction when you watch the music video for “Today’s Supernatural,” from Centipede Hz, the latest album from the experimental-psychedelic/art-rock four-piece, released in 2012. In the video, a candy-colored Falcor-like creature cruises around the desert in a dune buggy, then gets attacked by dismembered floating arms, and frontman Avey Tare (with creepy contacts and some seriously cool makeup) sings over the spacey strains of an organ that looks like it’s made out of Sculpey clay. With unbridled creativity, Animal Collective continues to boldly go where few bands dare to tread, exploding more than a few of listeners’ neurons in the process. White Magic will start things off. (Kolbie Stonehocker)
The Depot, 400 W. South Temple, 8 p.m., $22 in advance, $25 day of show

Ra Ra Riot
Cellist Alexandra Lawn departed indie-rock band Ra Ra Riot over a year ago; since then, the now-four-piece has been branching off into new sonic territory, as heard on recent album Beta Love. Trading in their original orchestral sound for synthesizers, this is a Ra Ra Riot you’d find in the middle of the dance floor instead of hanging out with the band nerds by the wall. In the titular track, an ode to technological romance, frontman Wesley Miles sings, “In this city of robot hearts/ ours were made to beat.” Awwww. Caveman is also on the bill. (Kolbie Stonehocker)
The Urban Lounge, 241 S. 500 East, 9 p.m., $16 in advance, $18 day of show

The So So Glos
If you think all the people who live in New York City are bitter jerks, The So So Glos want to change your mind. The four-piece punk-rock “band of brothers”—Alex and Ryan Levine are real-life brothers, Zach Staggers is their stepbrother and Matt Elkin holds honorary brother status—from Brooklyn are proud of their deep roots in their home neighborhood, where they’ve started two all-ages venues, The Market Hotel and Shea Stadium. They make it such a point to connect with their fellow musicians, neighbors, etc., that BlackBook called The So So Glos “hometown heroes,” who “rule the underground, all-ages music scene in the city.” Their latest album, Blowout, released in April, is loud, fast and nihilistic, in a way that makes you want to jump around and crash into people, yelling your head off. Check out “Blowout” (the only intelligible word over the surf-y guitar is “blowout!!!”) and the anthemic “Son of an American.” Diarrhea Planet is also on the bill. (Kolbie Stonehocker)
Kilby Court, 741 S. Kilby Court (330 West), 7 p.m., $10