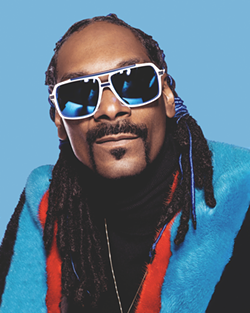 THURSDAY 9/6
DJ Snoopadelic
Whether it's ironic or planned, it's noteworthy: The same year that the Salt Lake Community College Twilight Concert Series changes venues (again) from Pioneer Park back to Gallivan Center, it also hosts the individual who embodies the evolving rap-music scene. Snoop Dogg, aka DJ Snoopadelic, aka Calvin Broadus, has worn more hats than anyone in the business—from rapper to Rasta, adult movies to gospel hymns, youth football to game shows. There's little room for Snoop to get any bigger, and yet he's still regularly adding skills to his bag. Yes, now he's taken up DJing. Some people feel like the D-O-Double-G should stick to what he's known for: Long Beach-tinged gangster flows, G Funk-laced beats and, of course, his signature cool demeanor. With influences as diverse as The Dramatics, George Clinton, Charlie Wilson, Roger Troutman and Bootsy Collins, though, you should expect DJ Snoopadelic to mix some old-school funk and R&B into his West Coast cut. He's probably forgotten more about music in a cloud of Purple Haze than most performers have learned in their lifetimes. And still—concertgoers should at least give Snoop a chance to prove he can hold his own behind the turntables. Will he be as bad as a Paris Hilton or a DJ Pauly D? I highly doubt it. Will he control the decks with the precision and skill of a DJ Jazzy Jeff or Kid Capri? Probably not. But with his ear, his catalogue and his history, I'd wager Snoop will impart his laid-back stoner vibe to what should be a large group of Twilight concertgoers with splendid results. Fa-shizzle! (Keith L. McDonald) Gallivan Center, 239 S. Main, 6 p.m., sold out at press time, all ages, twilightconcerts.com 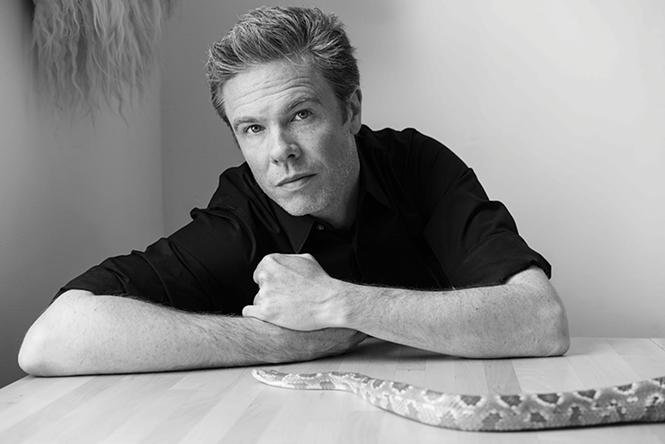 FRIDAY 9/7
Josh Ritter & The Royal City Band
Idaho native Josh Ritter's skills as a singer/songwriter were established early on, then fully fleshed out with a run of spectacular albums. Starting with 1999's self-titled debut and running through 2017's Gathering, Ritter's records court intellect and rely on observation. Making full appreciation of his talents elusive at best—especially to those for whom a simple "moon/June" rhyme scheme replaces real narrative acumen or insight. Ritter's influences come from novelists like Flannery O'Connor, Philip Roth and Dennis Lehane. He even managed to reference Shakespeare in the title of 2010 LP So Runs the World Away. That love of literature clearly comes naturally to Ritter, who's married to author Haley Tanner and is a budding writer himself: His 2011 novel Bright's Passage, published by Dial Press, is set during World War I. Unsurprisingly, Ritter's music is known for its novelty and flair, and his work is appreciated precisely because it warrants repeat encounters. And such an astute auteur requires an exceptional ensemble to back him up, and The Royal City Band serves that purpose both on stage and in the studio. This alliance—both supple and assured—is welcome in these crazy days. (Lee Zimmerman) The Commonwealth Room, 195 W. Commonwealth Ave., 8 p.m., $43, 21+, thecommonwealthroom.com

SATURDAY 9/8
Mushroomhead, Powerman 5000, The Browning, Kissing Candice, Unsaid Fate, Skyburial, Earth Caller, Natas Lived
In this instance, the age-old debate of "who wore it first?" is more than just a fashion blurb. City Weekly readers hopefully know by now that your humble metal reporter sports chic hand-me-down threads with luxurious mystery stains on the sleeves. No, the question is, who wore grotesque masks on stage first: Mushroomhead or Slipknot? The answer: neither. Although Mushroomhead, the theatrical nü-metal band hailing from Cleveland, Ohio, has been rocking latex masks that give people nightmares since they formed in 1993 (Slipknot started in '95), some say it was legendary '60s band The Residents who first appeared in face costumes. Other mask-wearing musicians go even further, claiming that classic country acts first perfected the bandit look. We'll never know for sure, but here's one thing we do know: Mushroomhead is no gimmick. Touring and recording for 25 years, Mushroomhead maintained their niche audience when Slipknot stormed the mainstream in the late '90s and early 2000s. Vocalist Jason "J Mann" Popson explained long ago that Mushroomhead donned masks to separate themselves in the Cleveland scene from their other projects. And although the masses didn't catch on to the band's creepy stage presence and electronic, theatrical nü-metal style, hardcore fans across the globe still throw down big money to collect Mushroomhead's terrifying disguises. Talk about a subculture all its own. (Rachelle Fernandez) The Complex, 536 W. 100 South, 6 p.m., $26 presale; $30 day of show, all ages, thecomplexslc.com

SUNDAY 9/9
Lake Street Dive, Robert Finley
What better example of the synergy between young and old than the dual diversity of Lake Street Dive and Robert Finley? The former have found themselves in the vanguard of festival favorites, with a clear populist appeal that belies their roots at the storied New England Conservatory of Music. Naming themselves after a street in one member's hometown that's known for a profusion of dive bars, Lake Street Dive are equally eclectic—mixing pop, swing, soul, jazz and bluegrass. Thanks to consistent touring and eight albums released over the course of 12 years, the band has garnered a solid fan base—and logged a viral hit with a street corner-recorded cover of the Jackson 5's "I Want You Back," which to date has garnered more than five million YouTube views. For his part, Robert Finley provides proof that good things come to those who wait—even if it takes much longer than expected. Fifty years after Finley started playing music, he was discovered by Black Keys guitarist and producer Dan Auerbach, who was so impressed he signed him to his Easy Eye Sound record label. The title of Finley's debut album, Age Don't Mean A Thing, is more than meaningful given his determined delivery. Both of these acts defy description, and should produce an enjoyable evening at the Eccles Theater. (LZ) Delta Performance Hall at Eccles Theater, 131 S. Main, 7:30 pm, $30-$55, all ages, live-at-the-eccles.com

MONDAY 9/10
Slow Hollows
You might not know Austin W. Anderson's name, but you probably know his sound. Performing, recording and writing as Slow Hollows, he's contributed gauzy guitar licks to high-profile recent releases by Frank Ocean (Blonde) and Tyler, the Creator (Flower Boy). In addition, Slow Hollows put out two sultry singles this summer, "Selling Flowers" and "Lessons for Later," which deploy horns, strings and synths to smooth out the abrasion of the band's older lo-fi post-punk releases. Maturity abounds in this new material; in a news release for "Selling Flowers," Anderson says it "follows a narrative of ignorance," acknowledging his own sense of oblivion to the world around him. "This song simply represents a young mind that really doesn't know what it's looking at just yet." Perhaps it's just a side effect of living and working in Los Angeles, but Anderson is everywhere—in addition to loading work with the aforementioned artists, his dreamy looks recently caught the attention of YSL creative director Hedi Slimane, who selected him to walk in a recent Paris runway show. Such refinement seems to be working, though, as the hype machine begins to bubble over for Slow Hollows' forthcoming full-length and the band's 16-show run across the country. "For a long time, I think we wanted to grow up a little bit too fast," Anderson recently told High Snobiety, "and now we're settling into being ourselves. It feels like there's definitely a new energy. We're basing it purely on feeling, and that feeling is a good one."(Nick McGregor) Kilby Court, 741 Kilby Court, 7 p.m., $13 presale; $15 day of show, all ages, kilbycourt.com

WEDNESDAY 9/12
Trombone Shorty's Voodoo Threauxdown feat. Galactic, Preservation Hall Jazz Band, New Breed Brass Band, Cyril Neville, Kermit Ruffins, Walter "Wolfman" Washington
In New Orleans, roots trump everything. So the average fan might look at 32-year-old musician Trombone Shorty and say, "He sure is young!" Or the traditionalist might listen to the amped-up gumbo of funk, hip-hop, alternative rock, blues, soul and R&B that Shorty and his band Orleans Avenue call "supafunkrock" and say, "Not jazz enough." But the man born Troy Andrews is a seasoned vet with an unassailable pedigree: His grandfather, Jessie Hill, was a lifelong musician who wrote the classic R&B track "Ooh Poo Pah Doo." Little Troy first started performing in his native Treme neighborhood at age 4 (hence the Shorty nickname). He started leading his own band by age 6, and toured with the Stooges Brass Band and his older brother James' All-Star Brass Band as a teenager. Just two months after graduating from high school, Shorty joined Lenny Kravitz on a worldwide stint, opening for Aerosmith. But there's much more to the man than his mainstream success. He's a trombone, tuba and trumpet expert who's also adept at saxophone, piano, bass and drums. Since 2005, when Hurricane Katrina walloped New Orleans, Shorty has served as a Big Easy ambassador, playing the White House and the NBA All-Star Game while working hard to pay respect to his native city's traditions. Hence the Voodoo Threauxdown, which features old-time traditionalists like Preservation Hall Jazz Band, Cyril Neville and Walter "Wolfman" Washington alongside young polymaths like Galactic, New Breed Brass Band and Kermit Ruffins. If you want to dance, this New Orleans showcase is your jam. (Nick McGregor) Red Butte Garden Amphitheater, 2280 E. Red Butte Canyon Road, 6 p.m., all ages, $62-$67, redbuttegarden.com