by Randy Harward and Alex Springer

THURSDAY 9/28
Curren$y, Kent Jones, Corner Boy P, T.Y., DJ Ski Beatz
"King Kong ain't got shit on me," boasts Shante Scott Franklin—otherwise known as Curren$y—on "King Kong" from Pilot Talk (DD172, 2010). That's a helluva claim to make, but Curren$y's discography is so long, it could probably become sentient and start swattin' planes from atop tall buildings. Since 2004, the dude has dropped nearly 50 mixtapes and 12 studio albums. And that's just solo; we're not counting collaborations and guest appearances, which also number in the dozens. Factor in that he's been active since 2001 as part of Lil Wayne's Young Money Entertainment brand, and works with the likes of Snoop Dogg, Devin the Dude and Raekwon, and you see just how large the dude is. But what really sells it is his music, with beats informed by old-school funk and soul, pop and rock and flowing bars that never work too hard to prove anything but still assert his dominance. (Randy Harward) The Complex, 536 W. 100 South, 7 p.m., $22.50 presale; $27 day of show, all ages, thecomplexslc.com 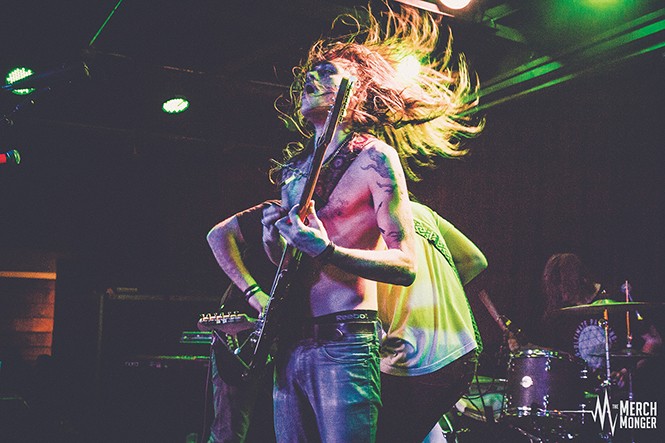 SATURDAY 9/30
Quiet Oaks: Farewell to Nashville Show
The problem with the once-again-expanding local music scene is that some acts outgrow it and move on. Case in point: Quiet Oaks, the group founded in 2015 by four-fifths of beloved band The North Valley. Both acts built a reputation for great songs and shows, and Quiet Oaks wasted little time maintaining TNV's momentum, releasing the EP Put Your Dreams Where They Belong in 2016 and the full-length Pretty Alright (quietoaks.bandcamp.com)—which is that, at least. On record, the tunes are incredible, and they become even more powerful on stage. That makes Quiet Oaks a must-see—even in places like Chicago and Nashville, where they've performed to sold-out crowds. If you have a following in either city, you might as well see where it leads—which is why, two days after this show, Quiet Oaks will leave SLC for Nashville. "This is the goodbye party!" drummer Spencer Sayer says, adding that the set is sequenced chronologically and will include "really old songs all the way up to the new stuff. We also have some surprise guests coming to join us." Reading between the lines, that suggests we might see a brief TNV reunion, and/or hear songs by pre-TNV band The Spins. If not ... well, you know what they say about making assumptions. Opening the show this Saturday are Panthermilk and Sunsleeper. (Brian Staker) Urban Lounge, 241 S. 500 East, 8 p.m., free, 21+, theurbanloungeslc.com

SUNDAY 10/1
Seun Kuti & Egypt 80, Samba Fogo
It's been two decades since Fela Kuti, the Nigerian Afrobeat/highlife pioneer and human rights activist, passed away from complications resulting from AIDS in August 1997. The ensuing wave of revived interest in his music included a slew of reissues that sold like hotcakes, an annual festival (Felabration) and Alex Gibney's 2014 documentary Finding Fela (plus a rumored Steve McQueen-directed biopic that has yet to materialize). It was also a boost to the emerging careers of his eldest son Femi and his youngest scion Seun. At 14, Seun wound up taking the reins of his dad's band Egypt 80—and doin' him proud. With him at the helm, Egypt 80 has four albums of slinky, exotic tunes that carry on Fela's sound and message, indicting political and social injustice, not to mention corporate greed in the form of blood-diamond purveyors and Franken-food pushers Monsanto. Twenty years later, Fela lives on within his offspring. (RH) Urban Lounge, 241 S. 500 East, 7 p.m., $20, 21+, theurbanloungeslc.com

Nekromantix, Hi-Fi Murder, Utah County Swillers
Psychobilly is a punked-up strain of rockabilly (which is a rocked-up strain of country), and it's usually preoccupied with comic-booky horror-movie imagery. In other words, it's pretty fuckin' sweet. Popped, choked, slapped upright bass dovetails with driving drums, maniacal guitar solos, rebel-greaser vox and lyrics about gargoyles, dead cheerleaders, were-coyotes and ghost babes—it just doesn't get much more fun than that. The psychobilly performed by Danish trio Nekromantix, led by singer-bassist-songwriter Kim Nekroman and his self-constructed coffin bass, is some of the best around. Look no further than the band's latest album, A Symphony of Wolf Tones & Ghost Notes (Hellcat, 2016), which finds them still at the top of their game after close to 30 years. (RH) Metro Music Hall, 615 W. 100 South, 8 p.m., $14 presale; $16 day of show, 21+, metromusichall.com

TUESDAY 10/3
Toadies, Local H
I don't think any of us could have gotten through the hellstorm of '90s nü-metal if it wasn't for bands like the Toadies and Local H. With lead vocalists who knew how to dig deep into the vulnerability of their screaming, pissed-off personas, these bands had the misfortune of being drowned out by gimmicky contemporaries who wouldn't know vulnerability if it threw on a backward baseball cap and covered George Michael. It's actually a testament to both bands that they weathered said hellstorm by continuing to tour and release good, new material, which makes a show like this a special kind of victory over the legions of chuckleheads who crapped their JNCOs whenever a new Korn album was inflicted upon us. Come to the show not only to celebrate two battle-hardened survivors of the nü-metal apostasy, but to revel in the fact that we don't have to hear "Break Stuff" on the radio in this day and age. Then bask in the twisted new tunes from the Toadies' upcoming album, The Lower Side of Uptown (Kirtland Records). And definitely see if you can get Local H to do their kickass cover of Foreigner's "Jukebox Hero." (Alex Springer) Metro Music Hall, 615 W. 100 South, 8 p.m., $28 presale; $30 day of show, 21+, metromusichall.com

WEDNESDAY 10/4
Ben Ottewell, Buddy
U.K. alt/indie rockers Gomez are a three-headed hydra of ridiculously skilled singer-songwriters, and Ben Ottewell is one of 'em. He's the first voice heard on the band's 1998 debut, Bring It On (Hut/Virgin). His sandpapery intonations are a stark contrast to the clearer vox of Ian Ball and Tom Gray—and also a tremendous background complement to them, adding not only harmony but texture. Each man's songs helped Bring It On win the Mercury Prize for best U.K./Ireland album, and the band become darlings of critics and fans alike, who met each of the group's six subsequent studio albums with copious drool. Well, it's been six years since we've seen an album from the band, but Ball has dropped two solo joints and Ottewell's on his third—A Man Apart (Sunday Best) came out in May. While he's gravitated toward more of an Americana sound in his solo work, Ottewell's tunes remain as lucid and personal as ever, and his dusky, weathered voice is well-suited to the rustic context. With Gomez on hiatus, it's good to see Ottwell staying sharp (RH) The State Room, 638 S. State, 8 p.m., $18, 21+, thestateroomslc.com