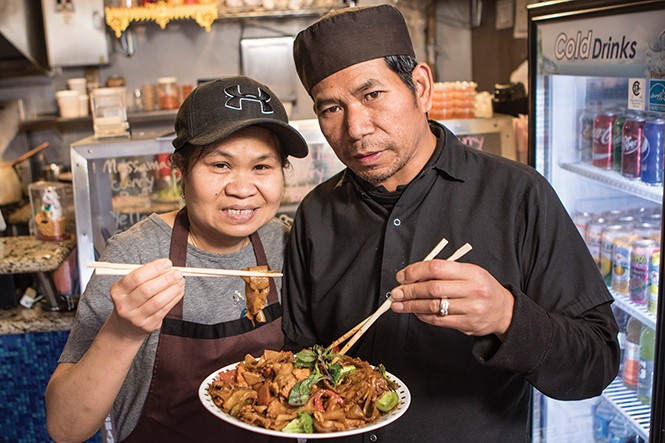 There has been no shortage of discussion and debate over the pros and cons of immigration and U.S. immigrants in recent years. Some of the most vivid colors in the American cultural tapestry were and are painted by immigrants, like the husband-and-wife team of Wichai and Yupin Charoen. I dare say that Salt Lake City, and Utah in general, are richer places because of this dynamic duo. They opened their eatery, Laan Na Thai, a few months ago. Theirs is a story some of you might know—a tale of the American Dream in action.

The restaurant is located in the downtown space that previously housed Ekamai Thai on 300 South, near Caputo's. For the past six years, Yupin was the cook at Ekamai, until the owners suddenly decided to relocate back to Thailand and sell the restaurant. Yupin was devastated. She and her husband come from an impoverished part of northeastern Thailand and grew up with very little, including education, and she feared that she'd never be able to find another job here.

Thankfully, there are angels among us, including Grace Henley, Food Entrepreneurship Program Manager at Spice Kitchen Incubator. Somehow, the planets aligned, and she happened to pop into Ekamai for a meal. A regular, she noticed that the normally cheerful Yupin seemed despondent. What happened next, according to a forthcoming article by Maya Silver in Devour Utah (of which I'm editor), was "one of the most beautiful moments" of Henley's career.

Spice Kitchen Incubator is a program of the International Rescue Committee in partnership with Salt Lake County, whose mission it is to assist immigrants, refugees and other disadvantaged community members in starting full- or part-time food businesses. Many of the startups are food carts or trucks. You've seen some of them at farmers markets and elsewhere, such as Olives & Thyme, African Spice, Jamaica's Kitchen, Mother of All, Spudnik, Hayat's Grill and others. Laan Na is the first Spice Kitchen project to see fruition as a full brick-and-mortar restaurant, and Yupin Charoen no longer worries about being fired.

She and Wichai are the nuts, bolts, beams and foundation of Laan Na Thai. They do everything: cook, clean, prep, take orders, serve as cashiers, operate their business, and somehow still manage to greet customers with a smile. They are never not busy, but they've been well trained by Spice Kitchen Incubator. The restaurant is tiny—just a small kitchen with counter service and a few stools inside, and some sidewalk tables outside. I've seen walk-in freezers at restaurants that are bigger, but that's OK, because the Charoens can call it theirs.

Laan Na might be small, but the menu isn't, and it's an improvement over Ekamai's. For such a small kitchen, there sure are a lot of tasty options, with prices topping out at $10.49 for special dinner entrées. Customers seem to favor the bargain-priced combo meals, where a one-item combo with rice (white or brown) is $5.99 and the two-item combo with rice and an egg roll is $8.49. I was a tad confused about what and how to order on my first visit, but Yupin patiently walked me through the options.

Along with Thai staples that are familiar to many—such as pad thai, drunken noodles, pad siew, massaman curry and the like—they also offer dishes that are native to northeast Thailand. One such dish is nam tok ($10.49), which in Thai means "waterfall." It's a meat salad of tender stir-fried flank steak strips with romaine lettuce and sticky rice, brimming with the spicy, tangy and salty flavors of scallions, Thai chiles, nam pla (fish sauce), shallots, lime and cilantro. Now that's my kind of salad.

The bold flavors of that region are also well represented in the exquisite hung lay pork. It's melt-in-the-mouth pork belly in a rich, spicy curry with coconut milk, carrots and potatoes. I'm also torn between two chicken options on the menu, both of which are wonderful—even served up in Styrofoam. I love the fragrant aromas and flavors of stir-fried boneless chicken with Thai basil, bell peppers, sliced onion and green beans. But I'm equally fond of Yupin's yellow curry with sweet hints of coconut milk enveloping tender chicken, potato chunks and carrots. Thankfully, a two-item combo plate allows me to enjoy both chicken dishes.

There are a couple of sides/appetizers that you shouldn't pass up. I start every meal there with an order of chicken puffs ($4.99)—delicate, housemade puff pastries filled with minced chicken and onion. They are fried until just golden and crispy and delicious. The curry dumplings—filled with minced pork and scallions and bathed in a slightly sweet yellow curry—are another fab starter.

The menu also includes soft drinks, fruit beverages, Thai coffee and Thai iced tea among their options, but no wine or beer. Since there's not much elbow room in the restaurant to begin with, I prefer to pick up a Singha six-pack at the liquor store and enjoy my Thai meal at home. Speaking of home, Salt Lake City is now a permanent home to the Charoen family. If there is a case to be made for immigration and the belief that in America, anyone can achieve success, this is it.