Live-action role players dive into the universe of Mythic Realms. 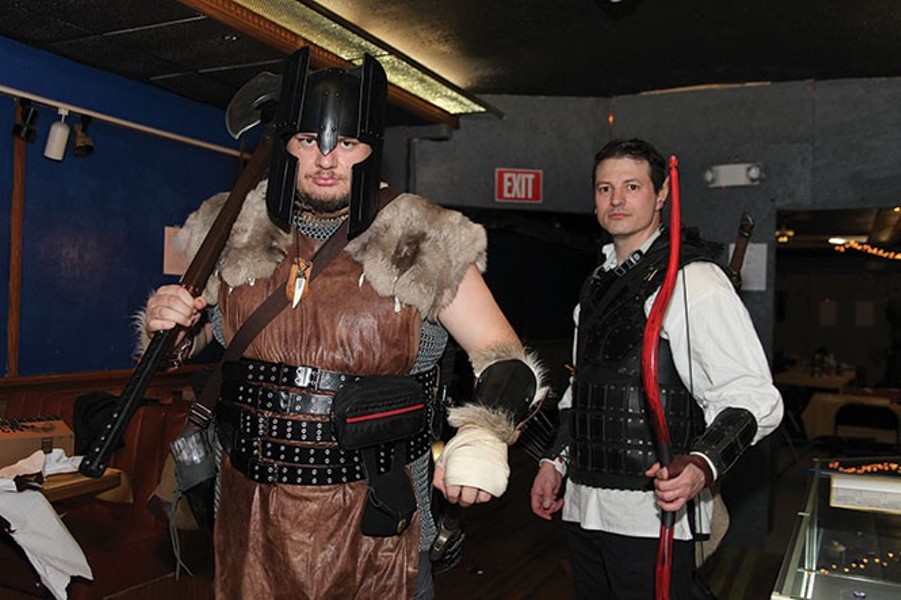 Panting hard, I made my way down the narrow hallway, red foam weapons in hand. Dressed in plain black, I looked ahead toward a group of cautious players.

Unlike myself, they were decked out in fantasy garb, sporting leather armor, numerous pouches and trinkets and even a few feathered hats. As I approached, they warily raised their faux weaponry. I was posing as a phantom this time. What followed was a tense standoff, straight out of the strangest Western you could imagine.

I broke the stillness first, diving forward and calling my shot ("Two pass!") which let them know how much damage I inflicted. I clipped the torso of the front player, and they retaliated immediately. Despite a few wild parries, I was "dead" within a few seconds, having taken enough damage to remove me from the game.

I put my fist to the side of my head, signifying I was out of the game for the moment, and then ducked through a doorway heading toward another part of the maze. The players would have to defeat me and my compatriots a few more times before they could advance, and I intended to make the most of it.

I was playing a Wednesday night game with Mythic Realms (MythicRealms.com), a Salt Lake City-based LARP (live-action role play) group. More or less an in-person version of tabletop games like Dungeons & Dragons, it involves players assuming the role of powerful fantasy characters while event organizers and non-player characters, or NPCs (like me) populate the world that surrounds them.

Earlier, I had gotten instruction from the staff member directing the game, and he had given me a rundown on the creatures and challenges the players would be facing tonight. I had a cheat-sheet in my pocket, listing all the important abilities each creature had, with tactics they wanted us to employ against different player groups.

I spoke with Mythic Realms general manager Zach Martin, worried about the challenges a new, inexperienced player like me might face learning the game on the fly, but he assured me I'd be fine. "One of the things we felt was most important was to make the game easy for new people to jump in and enjoy themselves without taking a great deal of time to understand how all the rule sets work," he says.

In fact, playing as an NPC was probably the best way for me to learn the hobby, according to Martin's fellow staffer Rebecca Rogers, who manages the game's overall storyline. Playing as an NPC, I was able to participate free of charge. Events like this cost $6 for each player, though Martin noted they usually don't charge players for their first session. They even have a few simple costumes and weapons on hand for newcomers to use, and as a few of the players assured me, no one cares how simple or elaborate your costume is. The goal is simply to have fun.

Still, it is apparent that many players take pride in the time and effort spent on developing their characters. Some of them come in costumes and gear that would not be out of place at Salt Lake Comic Con. Others wore simpler costumes, while NPCs like me sported a simple black tabard to let players know our role in the game.

Between the event organizers, NPCs and more than two dozen players, an epic story had been created through a combination of improvisation, scripted events, fast-paced combat and a simple rule system governing each character's various skills and abilities. As a novice to the process, the rules didn't seem that simple at first, but as time went on, things got easier.

While chatting with the staff, it became clear that I had apparently missed out on their annual weekend event just a few weeks earlier: a huge story-driven weekend drawing more than a hundred player participants, each bringing his or her own unique character inhabiting this imaginary fantasy world. And the world had a name, too. Originally created in 1999 by Mythic Realms founder James Bernard, the land of Cyrilla had seen close to two decades worth of player stories develop across its vast landscape.

It is these stories that attract players from week to week. Rogers has played with the group for more than a decade, and she speaks fondly of her experiences. "I once pursued a plot for two years, and finally came to the end of it," she says. "The thrill of finishing everything after two years in the plotline, it was amazing."

In that Wednesday night game, I tasted just a sliver of that. The excitement of inhabiting and shaping a distant world of imagination. I will be returning to Cyrilla as soon as I can.