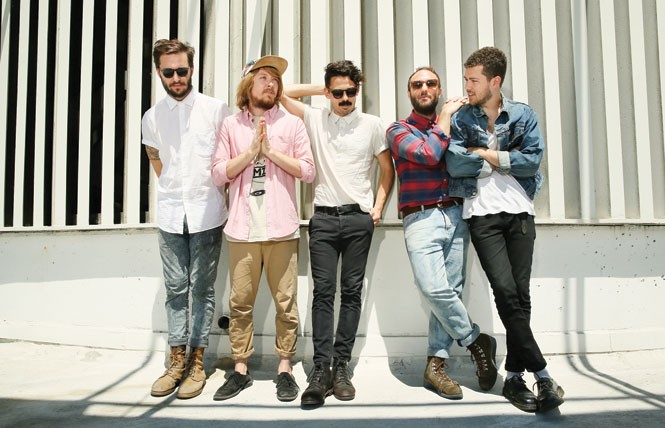 In the photograph on the cover of Local Natives' latest album, 2013's Hummingbird, a man is struggling to get out of a precarious position. With his legs dangling over an apparently endless abyss, it looks like he just succeeded in pulling himself back onto solid ground, but only by the skin of his teeth. It's an apt visual representation of the themes found on the Los Angeles indie-rock band's sophomore album, as well as the personal upheaval the five musicians experienced in the two years following the release of their debut album, Gorilla Manor.

In contrast to the buoyant positivity of that debut, Hummingbird is often gut-wrenchingly sad, a reflection of the band's emotional state during its creation. "We were in a pretty tough spot," says Kelcey Ayer, the band's keyboardist and co-lead vocalist. "My mother passed away, [we had] various heavy relationship issues, even some health-related ones, which all made for a heavier record, but it was one we had to make to get through those things."

Atmospheric but powerful, with Ayer's clear voice floating over layers of guitar and intricate percussion, Hummingbird is a universally applicable encapsulation of the range of human emotion. On "Bowery," the end of a relationship is described in the lyrics "The fall is so much faster/ Than you and I could ever climb." On "Colombia," Ayer paints the picture of his mother's final moments in the lyrics "The day after I had counted down all of your breaths/ Down until there were none, were none, were none, were none," then concludes the song by repeatedly asking himself the questions "Am I giving enough?" and "Am I loving enough?"

But with all of the difficulty Local Natives have endured, the creative future of the band looks bright, especially with the addition of a new bassist. "We pumped in some new blood with Nik [Ewing] joining us last year, so that's been a cool new dynamic for everyone's writing head space," Ayer says. And while there is "no solid news" about a new album, he says, the band is laying the groundwork for their next effort, optimistic about what's to come.

"We are just getting a new practice space/studio together to write in that should provide new inspiration for this next record," Ayer says. "A new creative space is always a good idea for starting a new chapter, so I'm looking forward to seeing how that affects us. ... We're in a better place than ever now."