Crucialfest 9 returns to a focus on heavy Utah bands. 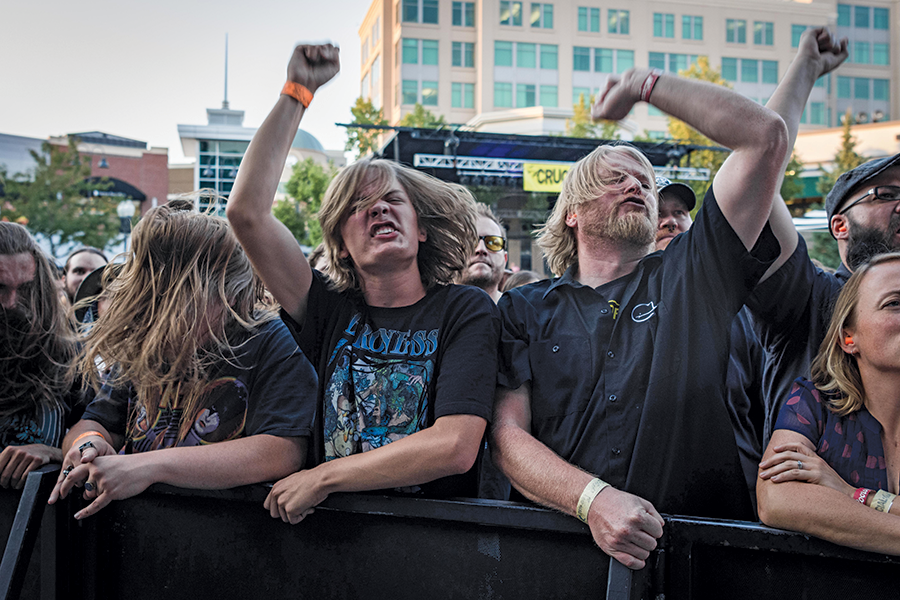 This year, Crucialfest 9 marks a departure from Crucialfest 8's emphasis on big headliners, instead exclusively featuring local bands, including some reunion acts. Pilot This Plane Down—whose last album was released in 2008—opens the festival on Thursday, Sept. 26. The ticket price is also more reasonable: $6 per day compared to the $50 per day prices of Crucialfest 8.

"We're going for simplicity this year," Jarom Bischoff, the festival's founder, says. "People are more responsive to the ticket price than they are to what bands are playing. Fans of Crucialfest are more fans of just seeing great live music, and so if you get these big headliners in there and have a fat ticket price, a lot of people just don't go to that because they don't know who those bands are."

In fact, Crucialfest 9 is intentionally a full pendulum swing from last year's installment. "I almost wanted to take a year off," Bischoff says. "Give it a break, come back to it fresh." The stress of managing Crucialfest 8, which was hosted at the Utah State Fairpark, took its toll. Outdoor festivals, Bischoff says, carry considerably more production requirements. The year prior, Crucialfest 7 was hosted at The Gateway, again outdoors, and the ambition of each festival had almost led to a burnout. "Doing events in SLC is very different from doing events in a bigger city," Bischoff says. "We have a lot of artists and music fans per capita, but we're a very small city."

Enter the decision to make Crucialfest 9 a locals-only festival. The shift harkens back to Crucialfest's roots, but it also speaks to the moment the heavy music scene is having in Salt Lake City. While it might vary by scene, for the heavy music Crucialfest traffics in—metal, hardcore, hip-hop, synthwave, punk, basically any high-energy genre—Bischoff argues that Salt Lake's geographic isolation is both a blessing and a curse. The physical distance creates a community that is genuinely talented and novel but always late to the zeitgeist. And when it comes to hosting a festival? We can't rely on neighbors. "The next closest city is Boise ... and that's a six-and-a-half-hour drive," Bischoff says. "Next closest is nine hours to Denver, 10 hours to Portland. There's just nothing close. It's not like doing a festival in California where you have not only your city but 10 other cities within two hours you can draw from."

The pressure on local talent to come through is high, but that's also the blessing: Local talent is brimming and in some ways incredibly vibrant. For any given genre, there's a scene of people trying to make it thrive and supporting each other, even if it's small. And yet, it's difficult to argue this isn't another effect of living in a state with consolidated religious and cultural power. The argument that Utahns can uniquely point to the ways in which The Church of Jesus Christ of Latter-day Saints not only shapes daily life, but created the foundation for many (if not most) of our looming cultural norms, is still compelling in 2019. "Having a weird, different major culture makes the subculture all the more important and special," the Crucialfest founder says. "I think people here feel that, and I think it comes out in people's creativity." Our origins are inescapable, but with time, the tension has become the tool of the minority.

The persistent problem, Bischoff argues, is local acts often labor in obscurity longer than they deserve: "People are picky about what they like and what they'll go to." According to Bischoff, there exists a herd mentality where groups will become big fans of particular bands, but that energy won't translate into a love of live music in general, so the music scene as a whole doesn't benefit from that concentrated fervor. "I wouldn't describe the overall state of heavy music [in Salt Lake] as a thriving or healthy scene," Bischoff says. "It's a struggling scene with talented artists putting out great music, but bands are struggling to find a fanbase that may or may not exist here."

In other words, if you're a Utah band and you've got something really special going on, you've got to leave the state—at least for a while. You tour, you make a name for yourself outside of the Beehive, and then locals will pay attention to you. Bands like Cult Leader, Subrosa and Needle Twin are examples of bands Bischoff has personally seen struggle on the local circuit, but who gained recognition only once music communities in other states validated them. "They go out of state, get a little more recognition from scenes that are a little more dialed in taste-wise to what the band is doing, then all of the sudden, once they have this notoriety—all of a sudden the following comes in Salt Lake," he says. "We're always late."

As for a potential Crucialfest 10, ideally it will be a balance between 8 and 9, Bischoff says. He wants the pendulum between large and local to rest at center, but that balance has proven hard for Bischoff and his team to achieve. "It's been an intense couple years, so you'll have to forgive me—I don't mean to sound negative at all," Bischoff says. "I'm gonna remember this year for a long time."