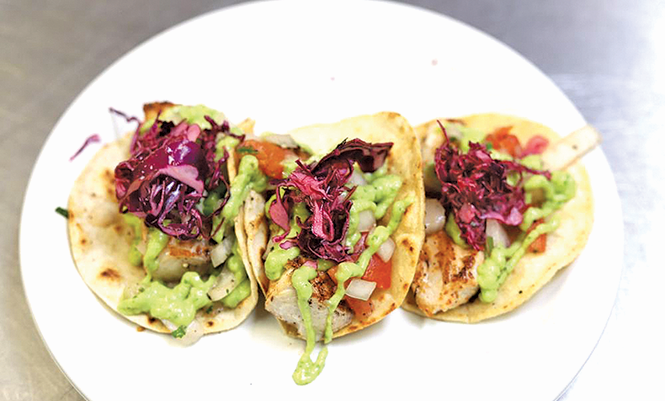 I've been visiting neighborhood gastropubs a bit more lately, and I think that cities should do more to cultivate this kind of establishment for the hangout potential alone. Take Localz Bistro (1850 E. 9400 South, 801-432-7604, localzbistro.com) for instance. It hasn't even been open for a year, but it's become an authentic snapshot of the East Sandy vibe. This cozy, family-owned spot—with a full wine, beer and cocktail menu and a decently-sized patio offering a nice view of our Wasatch Mountains—won me over even though they spell locals with a "z."

I've written about how dining research often becomes an excuse to round up my family and check out a new place, and my first trip to Localz was one such occasion. Now that the temperatures are coming down from triple digits, outdoor dining has become a lot more enjoyable, so we opted for some seats on the patio. I could understand how some might see the bistro's location in the Little Cottonwood Shopping Center as a detriment to their patio experience, but it's also a lot closer to the mountains than you'd expect. The proximity to our majestic peaks does plenty to direct one's focus on one of our state's best features.

Being a kid-friendly place that also provides parents with some alcohol is a great way to get people in the door, but stocking your menu with a gallery of Southern comfort food is only going to help. I suppose this was the seed that Localz planted in my brain after I wrote about its opening late last year; I am, and always will be, a sucker for Southern cuisine. I started with the jambalaya ($18) and my wife got the miso glazed salmon ($20), which was the daily special. My kiddo is leaning hard into a mac and cheese phase, so she was happy with the Lil Shredderz menu which featured the sun and moon of her culinary world.

The jambalaya was appropriately packed with a mix of grilled shrimp, chicken and slices of Tooele sausage. Though the server warned me that it was on the spicier side of the menu, I thought it was mid-range on my own spice spectrum, but that didn't deter from the meal as a whole. It's exactly what you want when you order a bowl of jambalaya—a bunch of grilled meats tossed into a flavorful bed of basmati rice. If it's around lunchtime, you can also get this jambalaya in a wrap ($15), which is a fantastic idea—jambalaya burritos need to be more of a thing.

My wife's miso salmon was probably the best overall dish of the evening as far as construction and execution goes. It was served on top of some creamy white cheddar grits with some braised greens, and hit every note it was going for. As I mentioned, it was a special, but it sounds similar to the blackened ahi ($22) on the regular menu. My daughter also thought highly of her mac and cheese, which I thought was pretty damn tasty myself—even though I had to work on convincing her to share some with me.

Like any self-respecting gastropub, Localz also has a selection of starters and desserts for those after more of a snack with their drinks. Poutine ($10) is always a welcome sight, as fried cheese curds drenched in gravy is truly a gift from God, and the bacon-wrapped BBQ shrimp ($16) plays to the restaurants strong seafood game. I was also a fan of the fish tacos ($11), which come street-taco style with a nice seared mahi, pickled cabbage and creamy avocado sauce. If you're after something sweet, just get the bread pudding ($7) without thinking about it—it's an enormous slab of soft, doughy goodness swimming in caramel. I know bread pudding is kinda basic, but that doesn't make it any less delicious.

Wrapping up my experience at Localz, I have to say this is a place with a lot of heart, and a menu that communicates that affection to its diners. I appreciate places where I can go with my wife and kiddo and wind down with some good food and good drinks, and that is exactly what Localz offers.