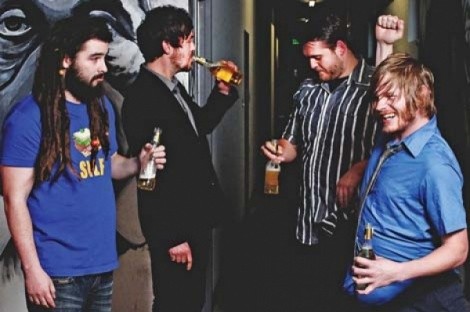 All the members of LDO, though, agree that their sound is “all-original, high-energy rock & roll.” According to them, that genre has been dead for years, and they’re ready to revive it in a way that’s both modern and organic.

Lead singer Randon Ostlund said of the classification conundrum, “Describing our music has always been difficult; I don’t know when rock & roll became such a dirty word in the music industry.”

LDO’s members believe that if they narrow down their genre with a simplistic label, they’re limiting not only what they can play, but their audience as well. “There’s a lot of different varieties of rock & roll ground we can cover if we don’t choose [a simple label],” West explains.

Keeping their rocking options open also makes it easier when the members are collaborating on songs because each is influenced by a wide range of artists.

“If I could say what we sound like the most, I’d say Queen, because they delve a little bit into everything,” Wadsworth elaborates. The rest of the band nods their heads in concurrence. Other influences on the list are Radiohead, The Beatles, Velvet Underground and The Band.

All of the members of LDO have played an instrument since their pre-teens. McCutchan picked up his first bass and Wadsworth purchased his first drum kit when both were 12. Ostlund played a variety of stringed instruments in high school before settling on rhythm guitar. West mentions he’s been playing ever since he can remember. “I’ve always had some kind of musical toy instrument,” says West, who can play drums and bass in addition to guitar.

LDO got their start jamming together under a plethora of different names. However, Long Distance Operator—they’re named after a Bob Dylan song—is the moniker that stuck. While they have been making music together for many moons, they didn’t officially become a band until McCutchan joined in 2010.

Since then, Long Distance Operator has been busy playing gigs and working on their full-length debut. Over the past few months, they’ve been recording with producer Matt Winegar, who’s also helped engineer albums with big-name acts such as Primus and Coheed & Cambria. Winegar describes LDO’s sound as a blend of psychedelic and indie-rock. He echoes the band when he says, “They don’t subscribe fully to any genre, which is what makes them so different in the Salt Lake City music scene.”

Longtime friends and fellow local band King Niko have been supportive of their comrades; in fact, King Niko singer Ransom Wydner’s vocals are featured on the track “Torches” on the LDO album. Wynder says of his buds, “LDO is, hands down, my favorite band in Salt Lake City. They got [King Niko] our very first show, and since then, I can’t count how many times we’ve played together.”

The new album, Sweet Lucy Devine, has nine songs, although, according to both LDO and Winegar, there are several great unfinished tracks they hope to complete later.

The new release is named after a character in the song “Brotherly Advice,” which is about a woman’s (Sweet Lucy Devine) son who seeks brotherly advice after finding out his dad is the devil.

“We’re all very satisfied with the way the album sounds,” West says. “We have a deep emotional connection with all the songs, and we play the kind of music that we would want to listen to. The time is ripe [for] rock & roll to thrive and breathe. It’s been stagnant for a long time. We hope we can carry on the torch.”

There are two upcoming release parties for Long Distance Operator’s Sweet Lucy Devine. One is May 7 with King Niko at the Canyon Inn, and the other is May 14 at the Garage on Beck with Dirty Blonde.

According to Ostlund, “The best way to understand us is to see us in action.”

Sounds like a challenge, and you’re invited. Just make sure your hands are ready to be kept in a permanent “rock on” position.