Local musicians pay homage to the late folk singer on a new album. 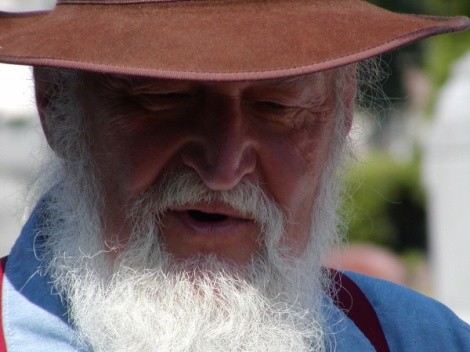 Bruce “Utah” Phillips just might get his wish to be remembered as a folk singer.

Utah Phillips was many things: anarchist, labor organizer, rabble-rouser, poet, iconoclast, artist. In 1968, he ran for the U.S. Senate in Utah under the Peace and Freedom Party. Before his death in 2008, he told his son, Duncan Phillips, he thought he’d always been pigeonholed due to his political leanings. “I wanted to portray that [folk singer], to give that back to him,” Duncan says.

To do so, a collective of musicians—with Duncan Phillips as executive producer and Kate MacLeod as producer—crafted Long Gone: Utah Remembers Bruce “Utah” Phillips, a tribute to the muckraking folkie that ably displays Utah Phillips’ folk-music talents.

“His songs and his stories were more or less my inheritance,” Duncan says—that, and an old curly-top maple Guild guitar, which still carries some of the activist Joe Hill’s ashes.

The dusty six-string appears on all of Long Gone’s 18 songs. The musical homage includes more than 20 musicians lending their keen musical interpretations of “The Golden Voice of the Great Southwest.” The album can be purchased at the fundraising concert Jan. 6, which will feature two hour-long sets. Duncan Phillips will emcee, telling stories between tunes, just as his dad would have done.

Though known as Utah Phillips, Bruce Phillips reluctantly left the state when he couldn’t find work after his Senate run.

Soon after, in Saratoga Springs, N.Y., he integrated himself into the iconic Caffe Lena coffee house folk scene, aided by musician Rosalie Sorrels. Over the next four decades, he toured the nation, returning to Utah sporadically. His musical sets encompassed historical stories, anecdotes, songs and, of course, political punches. When he passed, Duncan says, friends joked that before there was Google, there was Bruce.

Phillips’ classics like “Green Rolling Hills,” “All Used Up” and “Rock Salt and Nails” are absent from Long Gone because they wanted to keep it regional to Utah. For instance, “Scofield Mine Disaster,” recorded by Mike and Shauna Iverson, is about the 200 miners killed in Carbon County in 1900. Bodies were excavated, with coffins loaded on a train; Utah Phillips once overheard an old man say it was the longest train he’d ever seen. Another song, “Jesse’s Corrido,” recorded by Gentri Watson, is about an inmate at the Utah State Prison.

“I wanted to get a lot of artists to do songs they didn’t know, but also to get young artists involved,” Duncan says. Watson is one such artist, and her energy and gliding falsetto make for one of the album’s most enjoyable tracks. Watson became aware of Utah Phillips’ songs after he signed to Ani DiFranco’s Righteous Babe Records in the ’90s; Phillips and DiFranco collaborated on The Past Didn’t Go Anywhere (1996) and Fellow Workers (1999). The power of folk music lies therein: Crossing generations, a song’s gravity can be as strong a force now as in the ’70s folk heyday.

The album also features songs by Duncan Phillips, Kate MacLeod, Hal Cannon, Gigi Love, Paul Rasmussen and others. “One of the biggest jobs was coordinating all the people coming into the studio—quite a feat,” MacLeod says. They strove to record tracks in a pared-down fashion, she says, to honor Utah’s notions of presenting songs simplistically.

“His songwriting was so expansive. There’s a huge range of [people, emotions, etc.] he would write about. We wanted to portray that on the album,” MacLeod says. “And this is just the tip of the iceberg.”

Proceeds from Long Gone and the concert will benefit the nonprofit web archive, TheLongMemory.com, Duncan is creating for his father’s work. He also hopes to update and republish Utah’s original songbook Starlight on the Rails, and post the approximately 100 episodes of Loafer’s Glory: The Hobo Jungle of the Mind—Utah Phillips’ long-running NPR show broadcast from Nevada City, Calif. Additionally, several of the artists will tour the West this winter in support of the album.