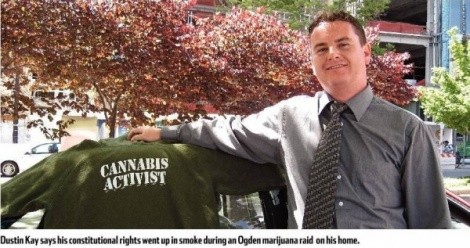 Dustin Kay smokes marijuana. It says so on his sweatshirt.

Actually, his sweatshirt says “Cannabis Activist,” as do hundreds of other hoodies, shorts, T-shirts and tank tops stacked in Kay’s Roy storage shed awaiting the day his clothing company gets off the ground.

For now, though, Kay’s $80,000 of inventory—and his dream of a silent army protesting the drug war by wearing his label—are under wraps. The money he’s saved to launch the business has gone to pay lawyers defending him against marijuana charges.

The 27-year-old has become an unwitting poster boy for his own legalization message. Kay is facing jail time for 3 ounces of pot found in his home during a December raid by the Weber-Morgan Narcotics Strike Force. That, and failure to use a turn signal.

“It’s ridiculous,” says Kay. “I’m not a violent offender. Instead of coming home and having a beer, I like to smoke a little herb. My 3 ounces aren’t hurting anyone.” Kay says the real issue should be the police who he alleges wasted good money going after his small amount of pot and violated his rights by sticking a global-positioning satellite-tracking system in his car.

When undercover police pulled Kay over Dec. 15, 2008, on 24th Street in Ogden, he told them as much. “I’m a pot smoker,” he told the arresting officer. “You guys are terrorizing nonviolent Americans.” That admission to pot smoking, he said, was used by police to get a search warrant for his home.

A former home contractor specializing in restoration after water damage, Kay looks more like a car salesmen than a marijuana legalization advocate. He’s devoted the past five years solely to his clothing business venture supported by donations from his family. It began with a trip to an Ogden’s hempfest in 2004. Kay’s hastily made “Cannabis Activist” T-shirts were snapped up so fast he thought he had a good business model. He trademarked the name and had a designer friend create a logo. He has spent much of his time since hawking his wares at hempfests around the Northwest.

“If I can put shirts on the backs of 1 percent of the cannabis activists in this country, I’ll be a rich man,” he says. But Kay also is a true believer, reeling off the litany of benefits that could come from the “miracle plant,” from alleged improved health through hemp-oil consumption to hemp fuel for cars. And, in contrast to some bloodshot-eyed legalization activists, Kay really does want hemp for the fabric. Currently, he buys his hemp clothing pre-made, but his goal is eventually to design his own clothing line. The activist part of Kay thinks many people who support legalization aren’t comfortable going to a rally, but would be happy to wear the message on their sleeves.

But first, he’s got to go to court.

Kay says he hasn’t been hassled by police because of his legalization advocacy. He says his name was given to Morgan-Weber Narcotics Strike Force investigators by an Ogden man caught in December 2008 with seven pounds of marijuana.

What happened after that, Kay says, is an example of how wrongheaded the war on drugs has become—police raided the homes of Kay and a friend under the mistaken belief that they had found the big connection.

It started Dec. 3 when 20 officers in full SWAT gear raided the east-bench home of Seth Spencer, one of Kay’s best friends. Spencer, a home siding installer, was out of town, but he says the lawmen scared his girlfriend, then seven months pregnant. The raid uncovered 12 grams of marijuana. Spencer was charged with felony possession with intent to distribute.

“They probably saw that Dustin was driving to the hill [an upscale part of Ogden] and thought I was supplying Ogden,” Spencer says.

Spencer says the warrant used to raid his home says police had followed Kay to his home. Kay says Ogden’s narc squad had put a GPS tracking device in his car.

On Dec. 15, when Kay was pulled over by an unmarked police car allegedly for failing to use his turn signal, Kay says an officer opened his trunk and pulled out a GPS system, telling him, “Pretty nifty little device, huh? I can pinpoint you anywhere on the map. How was the weather in Salt Lake?”

Apparently, officers thought they had another dealer, waiving the GPS device and telling Kay, “We know you’ve been making drops.”

There is no reference in Kay’s court file to a GPS device having been planted on or in his car. Kristopher Greenwood, Kay’s attorney, has challenged the investigatory use of global-positioningsatellite devices in an unrelated case of an accused poacher. Police should only be able to use such spy equipment after they have developed probable cause a crime has occurred, the attorney argued in that case.

Kay says at the time he was pulled over, at 11:30 a.m., the search warrant didn’t exist yet. It was signed by a judge two hours later based on Kay’s admission to using marijuana. Additionally, the warrant application says investigators had found some marijuana plant stems by going through Kay’s trash. They also allegedly found marijuana residue by swabbing his front doorknob.

In his home, police found 3 ounces of marijuana, one pipe and a digital scale. He was charged with felony possession with intent to distribute, possession of drug paraphernalia and failure to use a turn signal. His preliminary hearing on all charges is set for June 4.

Happy Gorder, who has been organizing an annual legalization rally in Ogden since 2002, says she hasn’t noticed any unusual attention from police in recent months. At this year’s May 2 Global Marijuana March, local police were “very kosher,” she said, though participants couldn’t help but notice undercover officers in the small crowd.

She is planning to gather signatures to put a medical marijuana petition on the ballot in Utah, but says public education needs to happen first. “Our problem is you get nine months for child sodomy and 1 ounce of marijuana is one year,” Gorder says. “A lot times, it’s a half ounce or a small quantity. It’s not for distribution, but they get charged with distribution. It’s an unreasonable time.”

A 2008 study by the University of Utah’s Utah Criminal Justice Center found the number of people in Utah’s prison solely for drug possession had exploded, from 15 inmates in the mid-1980s, to 378 by 2004. The explosion coincided with a dramatic increase in the arrest rate. Study authors couldn’t tell if there was more drug use or more police enforcement.

Kay is pretty sure it’s police enforcement. “I’m a strong believer in the Constitution and American political system,” says Kay, who calls the way he and his friends were arrested, “a direct violation of constitutional rights of the individual.”

Then he gives a plug for his business. “Utah was the first state to prohibit hemp. It will be the state to embrace a really fashionable clothing line putting statements on the chests of people who want to be heard.”