It's always been about the music at The Urban Lounge. 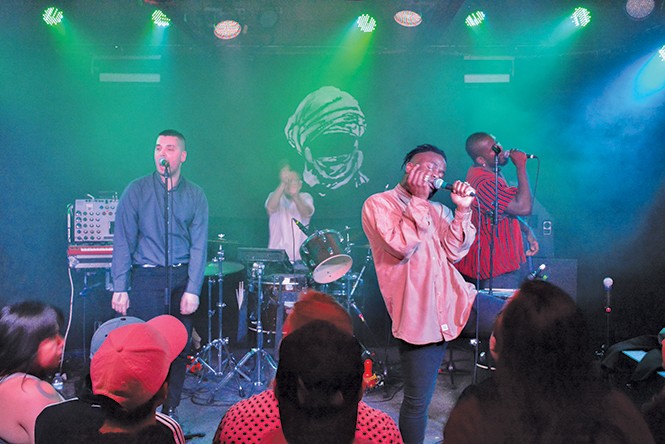 The Urban Lounge turns 15 this week. In some cultures, that's when a person is considered an adult—except this is a bar, and a music venue, where people get drunk and listen to music at high volumes. Doing it in public is considered adult behavior, which is rather ironic. These clubs are like the playgrounds and tree forts from our childhood, the source of so many romanticized memories of summer songs, goofing around and consuming things that are supposedly bad for you. In adulthood, it's pretty much the same—except we get to stay out as late as we want, and we have a shot at getting laid.

Haunts like Urban come and go, or they change hands, names and aesthetics—identities—like brick-and-mortar Mr. Potato Heads. Co-owner Lance Saunders, corresponding with City Weekly via email, says the building at 241 S. 500 East originally opened as Bourbon Street for a few months in 1994. It then became The Holy Cow.

That's where, along with the Bar & Grill, I first experienced local music, watching bands like Honest Engine, Headshake and The Obvious. I recall thinking how cool it was that these dudes could rock a crowd as effectively as a touring band, then you could run into them at their day jobs on Monday. This, while doing what newly legal drinkers do: sucking down steins of beer or similarly sized Long Island iced teas, seeing if our puke threshold increased since last weekend.

In 2001, the Gill family purchased the venue and christened it Da Phat Squirrel Presents: The Urban Lounge. A few years later, Mike Sartain (of the bands Fumamos and Starmy) became a silent partner. He says that Da Phat Squirrel/Urban was "an awful box of bouncing sound." With new sound gear and other upgrades, it evolved from booking mostly local bands to becoming a popular stop for touring acts. I have fond memories of seeing touring acts like The Hold Steady, Supagroup and a triple-bill of shock-rapper Black Nasty, his singer-songwriter sister Pink Nasty and local indie-rock liabilities/treasures The Rodeo Boys. The club continues to land some fairly impressive bookings, like Joseph Arthur (Sept. 19), The Sword (Oct. 29) and Joy Division/New Order bassist Peter Hook (Nov. 7). This, while still finding room for local acts—either through opening slots, album release shows, tribute nights or special events like Beat Society.

Saunders and his business partners, Will Sartain (Mike's brother) and Chris Wright (the club's longtime sound engineer), took over in 2008. "I was very close with the Gill family and was able to attend a few shows before I turned 21," Saunders says. "Same goes for Will. Funny thing: I saw an 18-year-old Will Sartain performing as Redd Tape, rocking out on his tippy-toes, before we even met in person—and I'm sure Chris Wright was running sound that night."

To last 15 years in a notoriously unstable industry is no small feat. Sartain and Saunders had been booking and promoting shows at other venues, and running production at The Urban Lounge for several years before taking the reins. Their experience, Saunders says, made running the joint easier. "We didn't necessarily 'struggle' with anything." In 2014, they purchased the shuttered Al Forno's restaurant adjacent to Urban. Their eatery, Rye, is a popular neighborhood breakfast and lunch stop.

Live music, however, remains their bread-and-butter. Sartain and Saunders say they're committed to promoting a balance of local and touring artists, and giving them a great place to play their music. "If a band has a positive experience at The Urban Lounge, they are more likely to return in the future," Saunders says. "We are always looking for ways to make the venue better for everyone."

Both men are pleasantly surprised that the club has lasted so long. "I'm so happy to be a part of something that we can share with the people of this city," Saunders says. "Something that brings so much love, magic and fulfillment to so many lives. Our hope is to make Salt Lake City a better place for music. It's all about the music. It always has been." CW