Mia Love is a heartbreaker 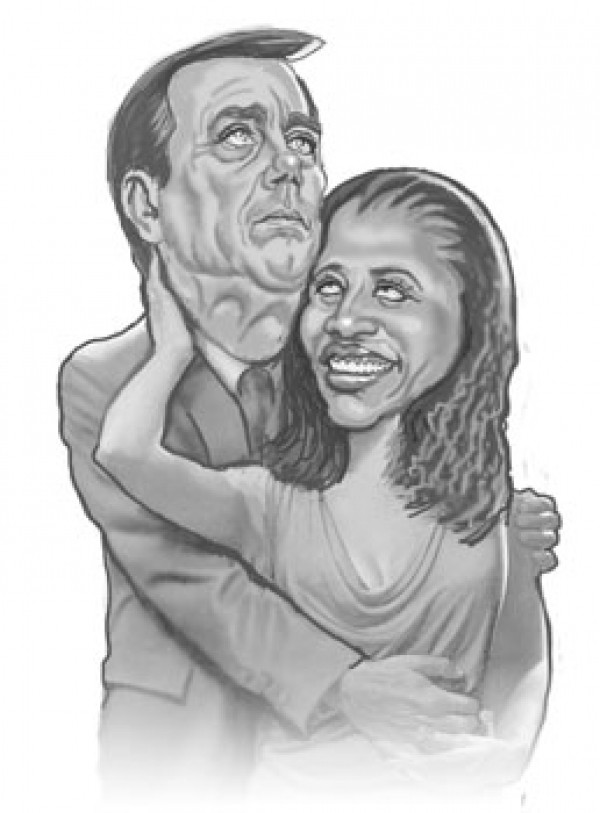 Never saw it coming. One minute, Mia and I are thick as thieves, snug as two bugs in a rug, soul mates and eternal companions. The next minute, I see her on TV making goo-goo eyes at John Boehner, of all people.

A couple of things about John Boehner. First of all, he’s not just tan, he’s orange. Second, his name is really pronounced “Boner,” not “Bayner.” He changed the pronunciation once he got to Congress, for obvious reasons. Everyone back home still calls him Boner (except for those who call him Dickhead).

So, Big Shot Boner waltzes into town and Mia practically swoons at his feet, which, by the way, are lily white, not orange, shod as they always are in golf shoes or tasseled Italian loafers. I have this on good authority. Like Robert Pattinson being blindsided by his co-star and significant other, Kristen Stewart, I was totally submarined by Mia, whom I have supported from the very start of her campaign to unseat longtime incumbent and DINO (Democrat in Name Only) Jim Matheson.

Unlike Johnny-come-latelys such as John the Orange Boner and John McCain (more about him later), I have been onboard with Mia even before she set sail for the halls of Congress. In fact, I take pride in being the first to recognize that with a name like “Mia Love,” she would be a shoo-in. Who could vote against “My Love”?

Not only that. Just the sound “Mia Love” strikes a deep subliminal chord in the collective bosom, starting with the delicious “mmm,” followed by the light front “eee” sliding back in the mouth toward the soft “uh,” the tongue then pressing the upper incisors gently to initiate with an L the final back vowel, lengthening and lingering on the “uh” of love, climaxing with the soft murmuring “vee” touch of teeth on the lower lips. MMeee-uh Luuhvv.

The name feels good in the mouth, much more evocative, in my mind, than the vocables of “Lo-lee-ta” so lovingly memorialized in the famous sexy-time novel.

But the romance is gone, the bloom is off the rose. Mia has decamped for the prickly politics and predictable talking points of Republican hatchet hackery. Mia has even spurned the advances of good old Uncle Orrin, who has been lobbing love notes up on to her balcony for weeks now.

Desperate for any sign of affection—a sidelong glance, a fluttering of eyelashes (word of advice to Mia: Ditch the false eyelashes), a beckoning palm, a kiss blown on the breeze—Uncle Orrin has taken to warbling love songs toward Mia’s window in the midnight hour, his plaintive tenor carrying across the waters of Utah Lake, from the windy shores of Saratoga Springs all the way to Lehi, Orem and Pleasant Grove.

“Mee-uh, MEE-uh,” he sings in his updated version of Johnny Mathis “Wonderful, Wonderful”: “I kissed you once, and then/ It was so wonderful, oh so wonderful, I want to do it over and over again.” (An aide to Mia put out a memo clarifying that the kiss wasn’t so wonderful for Mia. According to the highly placed aide, Mia described the kiss as purely platonic, the kind of scratchy off-the-mark puckering you get from your grandpa.)

Uncle Orrin shared with me the woe of unrequited love at a recent fundraiser, at which his brother in arms, John McCain, was extolling the beauteous charms of candidate Mia.

“I can see what Mia might see in John Boner, once you get past the orange skin. But, goodness gracious! What in the dickens does she see in John McCain? I’ve told John a hundred times that he wouldn’t feel like taking a nap 10 times a day if he drank Noni juice or followed my special regimen of multivitamins and high colonics. Anyway, Mia had better look out. She’s getting seduced by these out-of-towners and getting herself a swollen head. She’s got to keep her eye on the ball, local-wise, or Congressman Matheson is going to take her to the cleaners, mark my words.”

I fear that Uncle Orrin, as usual, is right on the money. Mia, John Boner and John McCain don’t love you for yourself alone, they love you for what you can do for them. What did John McCain say? He said you were a “foot soldier” in the battle to bring down Obama.

Sadly, by becoming a lowly foot soldier, you are obeying the marching orders of the Grand Old Party’s attack machine. Unfortunately, you have taken your love out of town.