Joy & torment in letters from Allgier 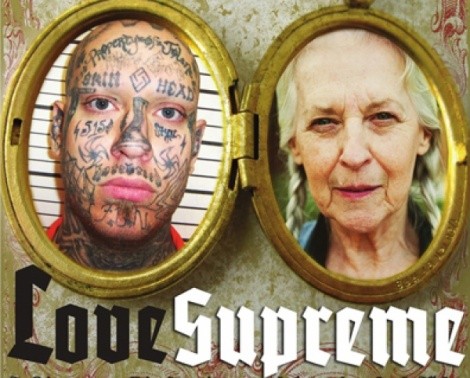 On Maxine McNeeley’s 71st birthday, inmate Curtis Allgier sang her a love song he had written over the phone from the Salt Lake County lockup. “He’s got a good crooning voice,” she says.

Allgier, who faces a capital murder charge for the 2007 shooting death of corrections officer Stephen Anderson, and McNeeley had been exchanging weekly letters for several years. After her daughter Julia Wheelwright went to prison in 2007, McNeeley found herself in her own “solitary,” rarely leaving her low-income housing in Ogden. But such was her fascination with the now 32-year-old Allgier that she made a sometimes twice-weekly, six-hour round-trip trek by bus and TRAX to Salt Lake City to visit him in jail. She also attended his court hearings. “I looked forward to going down there, even on the coldest days,” she says. “I’m the darned pony express. Nothing deters me. He just became my joy.”

After her birthday, McNeeley sent Allgier a thank-you card. On the bottom of the card was printed, “You have put gladness in my heart,” taken from the Book of Psalms. “I really meant it,” she says.

A few days later, she received a letter from Allgier in which he raged at her for upsetting some of his female followers and for failing to do as he asked. In a postscript, he wrote, “Don’t send me Jew shit.” When she tipped the envelope upside down, dozens of pieces of her torn-up card tumbled out.

McNeeley says she is one of “the women in the shadows” who live on state assistance and whose lives have been scarred by the incarceration of those they love. Of her five children—three of whom she had with one man, two with another—four have been behind bars. Recently, 49-year-old Frannie Owens, who spent the past 24 years working the streets to fund her crack and heroin habit, served 30 days in Weber County Jail for a drug-related charge. Julia Wheelwright has served four years of a 15-year sentence in Utah State Prison for kidnapping her own daughter. Another daughter, Desiree, had just finished a months-long sentence of day-reporting to the Weber jail on a possession charge when the deeply troubled 30-year-old hanged herself on Nov. 17, 2010.

“It just bugs me that our daughters and sons and husbands and wives and loved ones can be put into a system where they are basically forgotten about,” McNeeley says. “Just because you go to prison doesn’t mean you’re a worthless human being.”

Desiree Wheelwright did not like Allgier. “Game knows game,” she’d tell her mother, meaning that one scam artist recognized another. McNeeley stubbornly refused to quit her contact with Allgier. “He is my hobby, so leave me alone,” she would tell family members who insisted she stop visiting a man one of them calls “a cold-blooded murderer.” Allgier is far more than a pastime to McNeeley. She believes “he’s worthy of forgiveness.”

An occasional stoner, McNeeley possesses a salty collection of street and jail slang any ex-con would admire. She sees beyond Allgier’s tattoos—the swastikas, Adolf Hitler’s face on his chest and the words “skinhead” and “property of Jolene” (his second ex-wife) on his forehead—to a man “who has a heart, who’s got a nice way to him.” Indeed, he gave her a new lease on life. She told Allgier, “I’ve been sitting on the shelf for 20 years, and you dusted me off.”

Allgier doesn’t trust the “Zionist media.” But in a number of letters in response to questions from City Weekly, the voluble neo-Nazi discussed not only his relationship with McNeeley, but also his beliefs, which mix National Socialism with a messianic self-perception. “The truth and the fact is, I’m an amazing man,” he writes. “My divine transformation from powerful Aryan man, to even more powerful Aryan God. Not in metaphorical, literal, very literally!”

Her relationship with Allgier is “the hardest thing to explain,” she says. “It’s almost like he’s all things to me. When he’s chastising me, it almost feels like your dad, and you cower. I’ve anguished over him something terrible.” 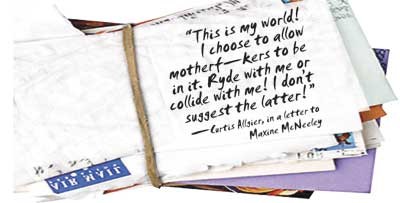 Allgier’s occasionally abusive letters reflect his intense dislike of people “swinging on his name,” as he told McNeeley. “I’m superior to all,” he ranted in one letter. “This is my world! I choose to allow motherfuckers to be in it. Ryde with me or collide with me! I don’t suggest the latter!”

But McNeeley’s passionate commitment to Allgier, for whom she ran countless errands to news media and lawyers, even complaining to Salt Lake County Jail Chief Rollin Cook about Allgier’s treatment in the jail, was severely tested by Allgier himself. After Wheelwright went to prison, he asked a female friend in prison to “stomp” her for speaking badly about him. He accused McNeeley of being a “race trader” for having children of mixed race and, in the wake of Desiree’s death, berated her in letters for not bending to his will, plunging her into an anxiety attack that left her bedridden for days.

But after the days of crying, of him having “dropped me to my knees,” she says, his rubbing her face in the tragedies of her own life has toughened her up. She quotes another inmate she corresponds with when she says, “Being down in the dirt hurts bad, but at least you know you’re alive.”

In the age of e-mail, Twitter and texting, McNeeley and Allgier’s story is, if nothing else, a testimony to the power of hand-written letters. “I don’t think he realizes how crushing his words can be,” she says. “He can reach right out from behind the bars and crush you to pieces.”

The Price of a Fix
When McNeeley opens a letter from Allgier addressed to Maxine, she knows she’s in for castigation. If it’s addressed to Lily White, she can expect more gentle fare. That’s a nickname she gave herself after getting to know Allgier. McNeeley grew up very poor in Ottawa, Ill., to what she terms “hillbilly parents.” Rich Jewish children would taunt her for her flour-sack clothing, and she’d retort, “You can kiss my lily-white ass.”

When McNeeley was 18, she fell in love with an LDS missionary who asked her to marry him after he finished his mission. McNeeley followed his instructions and took a prop plane to Salt Lake City. She worked for a phone company and stayed in the Beehive House for virtuous young women. But three weeks after she got there, the missionary wrote that the wedding was off. “He was my first love,” she says. “It took me a long while to get over him.”

The next year, McNeeley married Tom Owens, whom she met at a dance. They moved to California and had three children: James, Tammy and Frannie. After McNeeley left Owens in 1972, she struggled to find work and raise her increasingly troubled children. In their teens, at their mother’s request, James and Frannie moved to Hollywood to live with their wealthy father, while Tammy eventually moved to Pennsylvania and got married. James was in and out of prison until several severe beatings left him with brain damage, while Frannie spent seven years as a Hollywood street prostitute before moving to Ogden, where she has continued to turn tricks to buy drugs.

“Being a slave to heroin really gets old,” she says in a visiting booth via telephone in the Weber jail. “All you do is worry about getting money for your next fix.” McNeeley worries, on the other hand, that a large abscess on her daughter’s upper arm, where she injects heroin into the muscle, may result in Owens losing her limb.