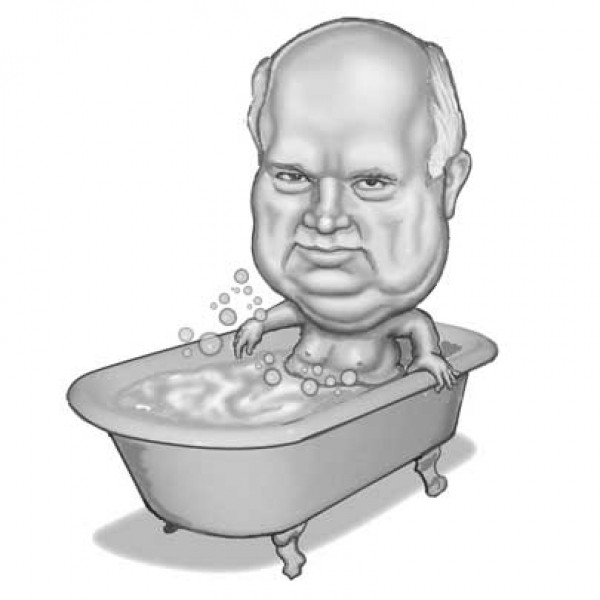 The Brigham City Council is gearing up for a heated confrontation tomorrow on the matter of the honorable Dennis Fife, the present mayor, erstwhile adulterer and excommunicated Mormon bishop. The disgraced mayor has been facing calls for his resignation ever since it became known that the ever-wily Adversary, aka Satan, Lucifer, Beelzebub, and the Prince of Darkness, had succeeded in urging him to escalate his relationship with a woman not his wife from ecclesiastical counseling to enthusiastic copulation.

The elderly Mr. Fife refuses to go gently into the chastened good night of private humiliation. He insists that he is duty-bound to stay in office and shepherd the troubled city back into fiscal stability. To prove that he is now on the path of righteousness, he has taken his church-prescribed medicine, releasing a mea culpa to the citizens of Brigham City in which he manifests a broken heart and contrite spirit for his sweaty extramarital conjunctions.

Despite his obvious heartfelt repentance and godly sorrow, a goodly portion of his constituents won’t cut him a break. Thus far, these hard-hearted and stiff-necked naysayers seem to be prevailing in their campaign to oust the plump public official from city hall. But tomorrow, these naysayers will have to go up against a newly organized contingent that fervently supports the embattled mayor.

Calling themselves the Dennis Fife Defense League, these supporters, the great majority of whom are plump gents of advanced years, promise to raise holy hell in tomorrow’s meeting.

According to Herm Limpnagle, the chief executive officer of the Defense League, the mayor has been unfairly trashed.

“It was Hamlet or Harry Truman, one of those guys, who said they came not to bury Caesar but to praise him. That’s what we want to do with Dennis. Not bury him, but praise him. He gives hope to all of us geezers with an impressive girth and a minimal amount of hair on our noggins. Instead of falling asleep on the La-Z-Boy lounger after Monday Night Football, ol’ Dennis heads off to the Galaxie Motel for a slap & tickle with one of the gals from the ward.”

Mr. Limpnagle said he and his fellow members of the Dennis Fife Defense League (“We nearly named it the Dennis Fife Fan Club, but settled on Defense League on account of it sounded more dignified”) have a few surprises up their sleeve when the outraged proponents of elderly chastity rain their insults down on the virile Mr. Fife.

“I’ll give you a hint. The first time one of them prudes condemns Dennis for his extracurricular exertions, we plan to stand up—at least as many of us who can stand up, if you get my drift—and shout out, ‘You go, Dennis!’ Of course, we’ll also have the usual signs, you know, things like, ‘You’re only as old as you feel, so go out there and feel someone today.’ I made that up myself.”

Naturally, given the inclination of bureaucrats everywhere to relieve workplace boredom with sly or suggestive humor, some wags in the Fife administration would greet the mayor’s protuberances with cracks such as, “Is that a gavel in your pocket, or are you just glad to see me?”

Mr. Fife’s colleagues finally figured out that something was up when the mayor, his face dangerously flushed, would dash out of his office at four-hour intervals to consult his physician. Conclusive proof arrived when constituents caught one of those TV commercials featuring Mayor Fife and the gal from his ward lounging in separate tubs on a bluff overlooking Bear Lake.

When called on to explain why he was lounging in flagrante and au naturel in the above-mentioned commercials, the mayor said he was merely cleansing, purging and whitening himself unto spotlessness to be made worthy again. He claims that he can “stand clean before God once more” and “taste again the sweet and satisfying fruits of fellowship with the Saints.”