Though the battle over same-sex marriage continues, the motivation for Utah couples hasn't changed

In the moments after federal Judge Robert Shelby struck down Utah’s law barring same-sex marriage Dec. 20, the reaction was explosive.

For supporters, it was an outpouring of joy.

“If they were to take another [marriage equality] poll like they did back in 2004, it would be completely different,” said a jubilant Daniel Musto moments after wedding his longtime partner. “Just seeing all the love people have for one another here, how could you deny it?”

Conservatives, however, responded with head-exploding outrage.

Eagle Forum leader Gayle Ruzicka registered her “disgust” with the marriages, and conservative activist and author Candace Salima opined on Twitter that “Surely the heavens must be weeping.”

At the Salt Lake County Government Center on Monday, Dec. 23, the line of excited couples seeking marriage licenses wrapped around two floors. Equality advocates had warned couples that they might have only a few hours to get their licenses; if a judge granted the state its request for a stay, it would put a freeze on further same-sex marriages.

But as historic as the occasion was, the couples themselves were not so different from straight couples in their motivations for being wed.

In fact, had the haters met some of those who were lined up that Monday, they would have found people who fundamentally fit the mold of Utah couples: People raised to believe in commitment, looking to start families—or looking to keep whole the families they already had.

Sure, the county building was not exactly the reception hall, wardhouse gymnasium or temple of a typical Utah marriage ceremony. Hundreds of couples waited in line, many with their children in strollers. Volunteer clergy filled the lobby of the building, next to tables stocked with coffee and donuts. Walking between the impromptu ceremonies, you’d catch snippets from officiants’ addresses, like “May each day be as precious as the first day you fell in love.” A hallway down from the cheers and commotion, a Zen priestess quietly married a lesbian couple. In the lobby, one priest pumped her arm in the air after reciting, “by the power of the state of Utah, I pronounce you spouses for life!”

The scene was chaotic, joyful, anxious, loud and, well, very gay, but it also hammered home the fact that for these couples, the day wasn’t really about politics or making a statement. For them, it was a day they’d only dreamed of, a moment to finally solidify years-long commitments and to seal their rights as a couple—rights that would allow them to protect their families, to visit loved ones in the hospital, to share benefits, and, above all else, to finally be a married couple.

But since Utah successfully convinced the U.S. Supreme Court to pass Jan. 6 a halt on same-sex marriages while the high court deliberates on the issues, these hundreds of couples now exist in legal limbo. Some fear that if the Supreme Court or the 10th Circuit Court of Appeals invalidates Shelby’s ruling, all the rights and privileges of these marriages could be dissolved.

Here are just a few stories of those couples’ stories, of what they gained that day—and what they now stand to lose, depending on the Supreme Court’s ruling.

Dapper and dashing in matching purple shirts, Duane Jennings and Brian Benington were easy to pick out in the line where, they proudly noted, they were the 104th couple.

The friendship and love between the two men charted an unusual path, rooted in the LDS faith they both grew up in.

Benington first met Jennings when he was quite young; Jennings’ LDS missionary companion helped convert Benington’s family to the faith while proselytizing in South Africa.

In the decades that followed, Benington married and had several children before separating from his wife and later reconnecting with Jennings.

The couple has been together for nine years, and marriage has often been a topic of discussion. For both men, though they are no longer church-going, being able to wed means the realization of values they were raised with that they’ve never given up on.

“I was raised in a very traditional LDS family, and as I came out, it was, like, ‘Well, I still want to be with someone and commit my whole life to them,’ ” Jennings said.

These values were not lost on their families; Benington’s grown son cried on the phone when he heard his father was getting married, and as the two men were being interviewed by City Weekly, Benington’s daughter was rushing to the county building to act as their witness.

“People need to understand that we have values. Many people don’t think we do, but marriage is one way of holding that up,” Benington said. “I had to tell my parents I may not be a proper Latter-day Saint anymore, but all the values I was raised with are still what I live my life by.”

Perhaps one of the most unique couples to take advantage of the historic day was actually a pairing of a man and a woman.

Kayla Salvatori identifies her authentic gender as that of a woman. She’s been transitioning from male to female, so, ironically, it took a court decision legalizing gay marriage for the couple to be wed as man and wife.

“He’s straight, so it’s different and not everyone gets it,” Salvatori said. “But you fall in love with the person and not the body, so we’re lucky.” 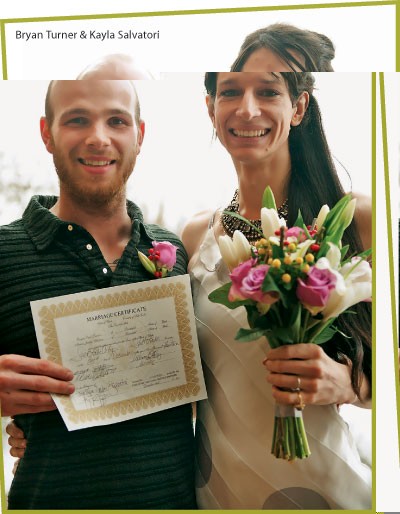 Bryan Turner and Salvatori have been together for more than eight years, since meeting on MySpace, of all places. For their first date, Turner, who lived in Richfield, met Salvatori, who hails from Salt Lake County, at a gas station in Panguitch before they drove back to Richfield to do some stargazing.

“I wasn’t used to the stars being so bright, being from the Salt Lake area, and he was all, like, ‘Look at the stars, they are as beautiful as your eyes,’” Salvatori said with a laugh.

While the social-media site hasn’t quite stood the test of time, the couple’s love has. They say they’ve felt nothing but support, even from Turner’s family, whom Salvatori describes affectionately as “super LDS.” She said she hopes more people will see the good that’s come of the day and try to accept the LGBT couples and families around them.

“How can you deny love and deny all the happy looks on everyone’s faces and all the families that are now complete?” Salvatori said. “That’s got to wake some people up.”

The lady whose hair Megan Gowers was cutting Dec. 20 will likely always remember exactly when she heard that same-sex marriage had been deemed legal in Utah.

After hearing the news, Kayla Porter started trying to track down her girlfriend to tell her the news. She eventually left her work early and interrupted Gowers cutting a customer’s hair.

Porter introduced herself to the lady whose hair Gowers was cutting and broke the news to them both.

“It was awesome,” Gowers said.

The two have been together since meeting on a camping trip in Southern Utah a year ago, and got engaged two months ago. Before the ruling changed things, they had plans to travel to Seattle to be married.

Surrounded by family, including plenty of stoked LDS kin, the couple said their vows and were wed near the entrance of the county building. The goofy grins on the couple only buoyed the applause, hugs and tears of witnessing family. As the reverend who officiated their marriage walked away, she turned to a friend to say, “How much fun am I having!”

And for Gowers and Porter, the fun is just beginning.