Lumpy’s hits a home run
The Angels pulled an awesome win the other night (7-6) versus the Yankees in the Game 5 of the American League Championship Series. Lumpy’s Downtown provided a great environment in which to follow the proceedings, with huge TVs and individual booths screening the action. Yankees fans showed their pride with jerseys and hats galore. Lumpy’s is also a good spot to catch Monday Night Football (25-cent wings all night) and basketball, too.

Pierpont Entertainment District Takes Over
Pierpont Avenue will be closed off to vehicle traffic for the massive Halloween Block Party featuring participating clubs Sandbar (122 W. Pierpont) and Lumpy’s Downtown. (145 W. Pierpont). The event will include a costume contest with prizes including $1,000 cash and an eight-day trip to Hawaii. Ticket prices include admission to both venues. Pre-sale orders are available for $20; $30 on day of party. The fun begins at 6 p.m. 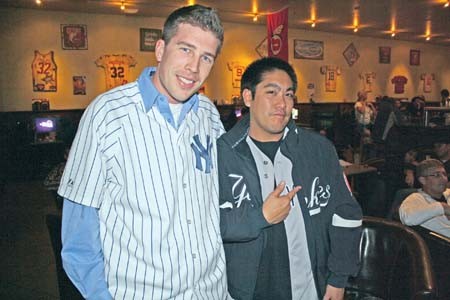