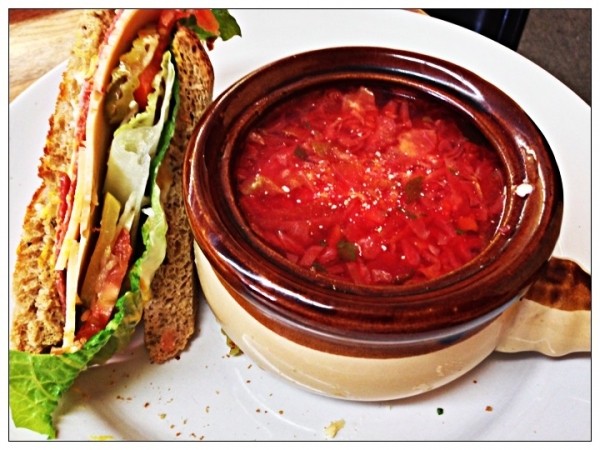 In Tim Ferriss’ book The 4-Hour Workweek, he says that “the fishing is best where the fewest go.” Whether we apply this to work or play, it’s often uplifting to get away from the crowds. This is precisely what I found at Luybochka.

Naum Shkrab has quietly run this small Russian/Eastern European grocery and Deli off of 3300 South for more than 14 years. While many restaurants go all-out with expensive décor, this is more along the no-frills style—the food commands all the attention.

The sandwich had Russian salami, but you can get one with bologna, pork meat, mortadella or veal meat. The cheeses all had names I didn’t understand, so I ultimately had Shkrab choose for me. It was a creamy variety like havarti, which made combined deliciously with the spicy salami and rye bread.

This was also my first foray into borscht. Luybochka’s was loaded with cabbage, carrots, beets and potatoes in a clear broth. Overall, I found it hearty and pretty mild.

But the pirogi was amazing. Shkrab makes all the food himself, and the flaky, buttery bread was wonderful. I could eat these pirogi by the pound.

And, lucky for me, Luybochka doubles as a small grocery where you can buy fish, meats, cheeses, Russian cakes, candy, dumplings and more—because once you go Russian, you never go back.